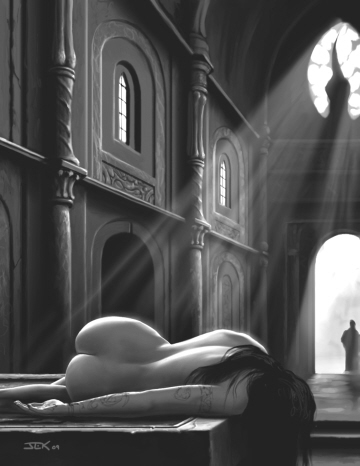 Rego’s seven-of-power served mine, and did so poorly. They had been foundering for years, since before Rego was made a Witch, and that was just the start of the fat fool’s problems. Rego’s thoughts and actions were riddled with a revolting lust for power, for blood, for sex. His very existence offended me.

I vowed that he would never come into his Redeviled birthright so long as I had any power in me.

As for me, with this most recent suicide I perceived ever more distance between my corporeality and my inner desires. This death was different. I could feel it under my skin like a drug, or an infection. It was as if I neared some culmination of power or endurance, perhaps some upper limit.

For that I blamed Rego, too.

The tottering simpleton rode next to me astride his mewling cat. Even his mange-riddled mount was pathetic. I rubbed the coarse, thick purple fur of Astrid, my own feral beast. Though her kind was native to the Drylands far to the south, my mount had been bred in Killaster’s captivity. Showing her pride, Astrid had nearly torn the throat from Rego’s gray-furred kitten the moment she met it.

Even animals judge character well. I would see Rego broken alongside that arrogant, foolhardy Prince Falloe. Their two raw, echoing skulls would be the drums that beat me home to Killaster.

Pleasant as my fantasies were, our mission required focus. We would ride until almost sundown to reach the marches of Prince Falloe’s domain. Like Astrid, I would keep my claws from the throat of the weaker creatures beside me until then. We might need Rego and his cat before we slew them, Astrid and I.

“Why choose me?” Rego wondered aloud, running a pudgy hand over his round, hairless head, stopping to poke at the folds of his double chin. His voice was as soft and blubbery as his body. “I am no part of your eight-of-power. I have no desire to join your eight-of-power. My eight-of-power serves well, guarding the Temple, and…” He turned to me with his wide, puffy face twitching into a squinting leer. “Cleaning up the ghastly messes left by others.”

I closed my right ear to him and gazed back at the last set of spiny towers on the slopes of Killaster Peak. Buried somewhere in the gullet of one of these smoke-blackened spires, I knew, was the small kitchen where I’d been pulled free of my dying mother’s womb. I remembered that day clearly. It had been my First Summoning and my first death. My mother was a disgraced Witch, shamed into nameless obscurity because her dalliance with a soon-dead mortal had bred me.

It is one thing to take sport among the weak. It is another to fall beneath them.

But even working as a floor-scrubber in the lowliest of the Killaster Towers, she had still been able to mark me with her tattoos inside her womb and save me from my birthing-day death. She gave me the gift of our Redeviled line. To be one of us is to have a devil locked within, lured by the tattoo needles flickering sharp into fetal dreams, emplaced at first-birth, locked inside by first-death.

I treasure always the memories of those slivers of bone stabbing hard through warm, red darkness. They are who I am, those memories. In my mother’s honor would I bleed Rego; bleed him for all his offenses.

Our mounts sauntered through the Scorched Hills, padding silently amid the gathered refuse of the terraced land. The slaves and laborers from Killaster had agreed, many years before my birth or my mother’s, that these foothills at the mouth of the Vale east of our great peaks would be the land’s dumping grounds.

Rego’s cat simpered with pain from the cuts caused by the myriad shards of glass and rusted metal embedded in the uneven soil. I closed my nostrils as best I could while maintaining the indifference of my ears to Rego’s panting words. We were halfway through the Hills when we saw the first sign of the priest-engineers’ workings.

Something tingled against my forearm the instant I saw the creature. With a knowing grunt I pulled Falloe’s warm copper coin from my sleeve pocket. I gripped it tight. The metal grew hot as we approached the structure in the middle of the sloping trail. Twice man-high, it was man-shaped: legs knitted of bridge cables torn from our mountain towers, arms welded of broken dagger hilts and bent drive shafts, torso livid with yellowed bones and discarded hair. This great fetish was topped by a faceless head wrought from a burbling porcelain cauldron, its curled rim splattered with the brown of shit or dried blood. The creature glowed a sickly green that reeked of mingled magick and death.

As we approached, it bowed to us. There was mockery in every shuddering step of its clumsy movements. I placed the hot copper coin in my wind-pocket, the flurry of cold air inside offsetting the intense heat in the presence of the priest-engineers’ handiwork.

Prince Falloe, it appeared, was expecting us.

I would not disappoint him.

He shuddered, the motion of his body spooking his mount, making it mew in disharmony with him. “No, Lena, I but serve the power of Killaster. This is… more…”

Of course it would not be so easy.

I rubbed the scars on my left arm to summon the winds to carry my words. “Killaster is come,” I said in a booming devil’s voice that would carry for miles, though the sounds tore at my throat and set my gums to bleeding. “We are here to reckon Prince Falloe’s debts. Stand aside, or be stricken.”

Falloe’s creature bowed again, then crossed its arms upon its chest. It yielded no ground to us. Though there was not any face drawn upon that stinking cauldron, I would swear that it grinned at me.

“Fall,” I said, the whirlwind shredding the skin of my lips.

A storm erupted from me faster than ever before, sucking air from my lungs. My eyes bulged, vision separating into a dozen parallax windows under the strain, the bright sunlight piercing each split eye, filling me with a necessary, familiar pain. My hair whipped straight forward to form a long gray dagger pointed at the creature’s heart.

It staggered before me, taking one step back, then two. The cauldron bubbled and shrieked, sending brown spray into the twilight sky of evening. Sickly green light played in sharp sparks across the creature’s arms and legs. Some even arced out to me, though I shook them off. It quavered on the verge of a third, final step, then found strength.

That cauldron-head tipped toward me to spill a portion of its slop on the ground between us. A nod to my power, not mocking this time. Then it took two steps forward and resumed its place, patient as a wall.

There was a span of silence, the cables of the creature creaking, my skin crackling as the healing took me, spreading outwards from the scars on my mapped arms. It was a minute or more before I drew my next ragged, shuddering breath.

“Well.” My eyes were settling back to normal – a small measure of comfort. “They have found new power down in Ironkeep.”

The complete version of “Devil on the Wind” appears in Black Gate 14.

7 thoughts on “Fiction Excerpt: “Devil on the Wind””