Readers with an eye for detail will note that this interview with Ian Tregillis was conducted in July, but not posted until now, and one might wonder why I waited so long. This one took a lot of sound editing because the interview covers two topics that are so intermeshed that we jumped back and forth in the actual interview, but I’ve re-edited it so that it’s got what I hope is a more logical progression. We discuss Ian’s trilogy, The Milkweed Tryptich, which includes: Bitter Seeds, The Coldest War, and the yet to be released Necessary Evil, which I cannot recommend highly enough. And while we discuss how these books came to be, we talk at length about our time in Critical Mass. 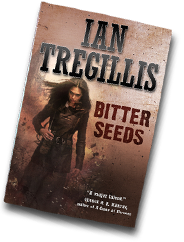 Critical Mass is a writers group that has been around for nearly two decades. During the time I lived in New Mexico and was attending meetings, the membership included: George RR Martin, Walter Jon Williams, S.M. Stirling, Melinda Snodgrass, Victor Milan, Yvonne Coats, Sally Gwlan, Terry England, Daniel Abraham, and Ty Franck, among others who came and went. (And now readers will cease to be the least bit impressed by whom I’m able to get interviews with, I know.) When Ian joined this group, I’d already been a member for about five years and he and I shared the distinction of being the youngest and only unpublished members. We were also the only members from Los Alamos and the meetings were always in Santa Fe or Albuquerque, which meant either a one- or a two-hour commute, so we carpooled. That probably gave us way too much time to form in-jokes.

This interview isn’t with just a fantastic writer, though he is that; Ian’s also a comrade in arms with whom I shared an important period of my career. The story of how his first novel trilogy came to be is inextricably connected to his tenure in Critical Mass and the high-powered, dynamic group it was and is.

An Interview with Ian Tregillis 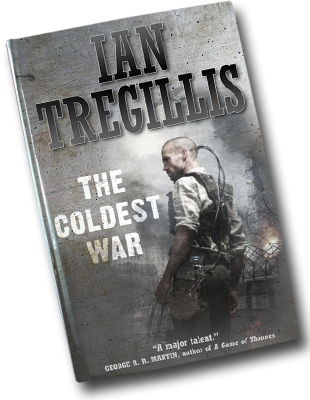 Click the link above to begin the interview. This one is twenty-eight minutes long, but I should forewarn you, parts of it involve Ian and I telling jokes and that will make it feel much, much longer.

Melinda Snodgrass was also present, and you can hear her comments and laughter in parts of the interview. Ian and I begin by discussing Ian’s work at Los Alamos National Laboratory, and then his time at the Clarion Writer’s Workshop for Science Fiction and Fantasy before we move on to how his Milkweed Tryptich came to be. Out of kindness to listeners, we held off on telling the worst of our jokes until the very end. The last three minutes or so of this interview, in which we discuss Vlad Jetpack: King of the Space Vampires, is a sample of what it’s like to be in a car with us, only you need to imagine these jokes going on for six hours or more.

I only get about 30 seconds of interview when I click the interview link.

Yes, this is a recurring problem, likely due to the audio file not downloading all the way. Does it not download more if you leave it paused for a few minutes? If not, let me know and I’ll ping the tech guy re: this.

Thanks, it seems that Quicktime didn’t like it. I switched to Windows Media Player and it is playing fine.

Aha! Good to know. Thanks!

Nice interview! Ian certainly needs to produce the 12 volume Vlad Jetpack series–hold him to that. 🙂

Thanks, and never fear. I wouldn’t turn down a chance to harass Ian. We’re always there for each other like that 😉 Though in all fairness, Ty Franck helped originate the Vlad Jetpack idea (he’s half of the writing team that is James SA Corey).

[…] More Than Night, a murder mystery set in Heaven, was published in hardcover in December. Emily Mah interviewed him for Black Gate early last year, and our roving reporter Howard Andrew Jones reported on […]