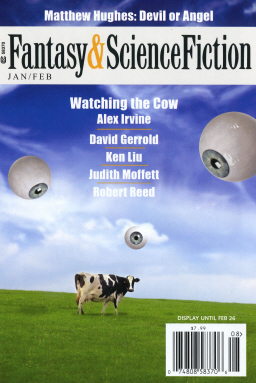 The new issue of Fantasy & Science Fiction goes on sale today. Not often you see cows (or floating eyeballs, for that matter) on the cover. Louis West reviews the issue at Tangent Online; here’s what he says about the cover story:

This issue of F&SF contains a diverse and (mostly) entertaining selection of SF, horror, and fantasy stories. Many of the authors have a long history of producing award-winning work. For the most part, that excellence is displayed throughout this issue.

“Watching the Cow,” by Alex Irvine, is masterfully told. Once started, I couldn’t stop. I had to know how it would end, and the end was nicely unexpected….

Ariel, the genius of the family, has accidently blinded two million teens who had been playing a game using VR goggles. And two of the kids were her brothers. But it wasn’t a physical blindness. All the parts still worked. The brain simply had stopped processing the visual data. The kids didn’t seem bothered at all, although the parents freaked and conspiracy theories thrived.

Ariel was determined to fix the problem, and her angry brother believed her. Instead of sight, all the kids could now mentally network with each other… This story is told from Ariel’s brother’s POV. It follows his emotional roller-coaster ride as he deals with what’s happening to his kids, their lack of reaction, keeping the secret that his sister had caused the problem and wondering when the FBI will finally catch up to him and Ariel. A pleasure to read.

The cover price is $7.99 for a generous 258 pages. The cover is by Chris Piccinetti.

We last covered F&SF here with the Nov/Dec issue.

There’s a remarkable similarity between this issue’s cover (aside from the eyeballs) to Pink Floyd’s 1970 album cover to “Atom Heart Mother.” Here’s the Floyd cover:

Just a coincidence, of course. But then take a look at the cover for the DVD release of Pink Floyd’s _Pulse_. http://ecx.images-amazon.com/images/I/518BFGA7KCL._SL500_AA300_.jpg

You’re right! That cow could be the sister of the ATOM HEART MOTHER. Or maybe the daughter, I dunno.

[…] Especially when you consider recent covers have featured deadly sea creatures, dragons, and floating eyeballs. But hey – magical cats are a time-honored tradition in American fantasy, so who am I to […]