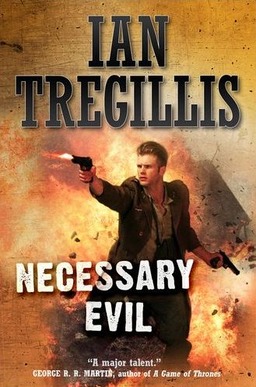 We celebrate the start of many a fantasy series here on Black Gate; I think we should pay just as much attention when an author brings one to a close. Especially when it involves Nazi supermen, the warlocks of Britain, and world-destroying Cthulhu-like monsters, like Ian Tregillis’s Milkweed alternate history trilogy.

Raybould Marsh, one of “our” Britain’s best spies, has traveled to another Earth in a desperate attempt to save at least one timeline from the Cthulhu-like monsters who have been observing our species from space and have already destroyed Marsh’s timeline. In order to accomplish this, he must remove all traces of the supermen that were created by the Nazi war machine and caused the specters from outer space to notice our planet in the first place.

His biggest challenge is the mad seer Gretel, one of the most powerful of the Nazi creations, who has sent a version of herself to this timeline to thwart Marsh. Why would she stand in his way? Because she has seen that in all the timelines she dies and she is determined to stop that from happening, even if it means destroying most of humanity in the process. And Marsh is the only man who can stop her.

Ian Tregillis’s latest novel, Something More Than Night, a murder mystery set in Heaven, was published in hardcover in December. Emily Mah interviewed him for Black Gate early last year, and our roving reporter Howard Andrew Jones reported on Ian’s appearance (and his uncanny resemblance to our Managing Editor) at ConFusion in Detroit just last month.

Necessary Evil was published today by Tor Books. It is 384 pages, priced at $14.99 in trade paperback and $9.99 for the digital edition. See all of our recent New Treasures here.