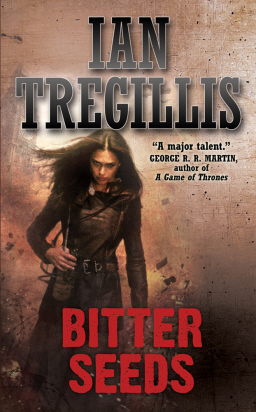 I somehow managed to overlook Ian Tregillis’s debut novel, Bitter Seeds, and that situation might not have changed if I hadn’t accidentally stumbled into his reading at the World Science Fiction convention.

In front of a packed audience, Ian spun a tale of Nazi supermen, the warlocks of Britain, and a desperate battle to prevent the twisted psychics of Germany from winning World War II in a supernatural alternate history. I heard less than a minute of his summary of the second novel, but it was more than enough to grab my attention. I got my hands on the first volume, just released in paperback, as soon as I could.

It’s 1939. The Nazis have supermen, the British have demons, and one perfectly normal man gets caught in between.

Raybould Marsh is a British secret agent in the early days of the Second World War, haunted by something strange he saw on a mission during the Spanish Civil War: a German woman with wires going into her head who looked at him as if she knew him.

When the Nazis start running missions with people who have unnatural abilities — a woman who can turn invisible, a man who can walk through walls, and the woman Marsh saw in Spain who can use her knowledge of the future to twist the present — Marsh is the man who has to face them. He rallies the secret warlocks of Britain to hold the impending invasion at bay. But magic always exacts a price. Eventually, the sacrifice necessary to defeat the enemy will be as terrible as outright loss would be.

Alan Furst meets Alan Moore in the opening of an epic of supernatural alternate history, Bitter Seeds by Ian Tregillis is a tale of a twentieth century like ours and also profoundly different.

Bitter Seeds was published by Tor Books on April 24, 2012. It is 467 pages for $7.99 in both paperback and digital format. The Coldest War, the sequel and second volume in what’s now being called The Milkweed Triptych, was published in hardcover on July 17, 2012.

See all of our recent New Treasures selections here.

I really enjoyed this one and hope you do too 🙂

[…] Convention last year — and that man knows how to pack a room. His most recent novels are Bitter Seeds and The Coldest […]