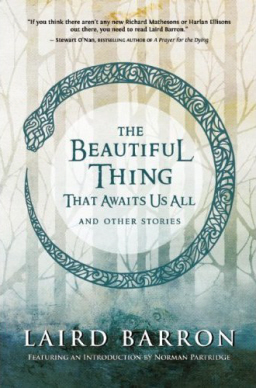 After having its delivery date pushed back multiple times, Laird Barron’s The Beautiful Thing That Awaits Us All has finally arrived.

This highly anticipated book marks Barron’s third collection of short stories (and fourth book), following both of his Shirley Jackson Award-winning collections The Imago Sequence and Occultation, as well as his 2012 debut novel, The Croning. As with his prior volumes, this one continues to meet, and exceed, the bar of contemporary horror stories, showing that Barron is still one of the leading horror voices of today.

Let me emphasize that this collection is in keeping with what I, and many others, have come to love and expect from Barron: a great combination of cosmic horror feel — which many associate with the early pulp writer H. P. Lovecraft — as well as Barron’s own gritty noir-like style. I’ll not retread this well-known ground. Rather, in this review I want to emphasize some other merits of this book, which I believe are represented in Barron’s other works as well.

First, I don’t know if this is new, or perhaps I just missed it in his earlier stories, but I noticed some great humor, especially in character dialogue.

In “Hand of Glory” two gangster types — Johnny and Vernon — are walking up to the front door of what may be the home of some witches. Johnny narrates:

The bungalow itself had a European style peaked roof and was painted a cheery yellow. Wooden shutters bracketed the windows. Faces, similar to the sinister gnomes, were carved into the wood. The iron knocker on the main door was also shaped into a grinning, demonic visage. A naked man reclined against the hedge. He was average height, brawny as a Viking rower and sunburned. All over. His eyes were yellow. He spat in the grass and turned and slipped sideways through the hedge and vanished.

“What in hell?” Vernon said

Here’s another example from the excellent and disturbing “The Men from Porlock.” Several rough logger types are sitting around a campfire listening to one of them tell the fairy tale Rumplestiltskin:

“How’n the hell that dwarf spin straw to gold?” Horn said. He took a swig of hooch and belched.

Also, this new volume contains more of a variety of horror stories than I remember from Barron’s previous collections. For instance, though “The Redfield Girls” is an eerie tale, it seemed to me to be primarily a character piece looking in on the lives of several middle-aged women. It’s definitely still a horror story, but the sort of direction in character development here was unexpected, though still very good. 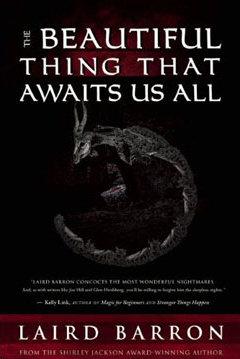 Similarly different, “The Carrion Gods in Their Heaven” was a horror tale focusing upon the life of a woman and her lover as they both attempt to escape her (hopefully soon to be ex-) husband. This story was slightly akin to a werewolf story, but I won’t spoil why this was the case.

In a different direction, I found “Vastation” to be something like an existential mood piece. There’s some plot here, but there’s also quite a bit of metaphysical trippy-ness as well. It was very good and reminded me of an earlier excellent tale of Barron’s, “Shiva, Open Your Eye,” and for some reason also Harlan Ellison’s “I Have No Mouth, and I Must Scream.”

But, in my opinion, “More Dark” is probably one of the most unique stories that Barron has ever had published. It is perhaps loosely based upon a real-life account of Barron and his circle of horror writer and editor friends at an author reading.

Barron veils, ever so slightly and to various degrees, references to people in this circle. Some are fairly obvious — “S. T.” is surely Lovecraft scholar S. T. Joshi ,and “Thomas L.” is undoubtedly horror writer Thomas Ligotti  — while others took me some time to figure out —  the SF&F magazine “HOCUS” has to be LOCUS, while the speculative magazine “Strange Vistas” is, I think, Strange Horizons. I’m not sure that this story registers as a horror tale, but there is definitely a nihilistic tenor throughout.

Cosmic horror writer H. P. Lovecraft was known for recurring characters, places, and even evil books throughout his stories. Though I’m sure this probably was not original with Lovecraft, Barron seems to be following this example since he makes repeated references to various people and places (and even a particular book) throughout his stories as well. I had noticed this before, but Barron’s new book continues the trend.

Though readers can enjoy this book, as well as Barron’s other stories, without tracking these seeming incidentals, this counts as an extra layer of enjoyment for die-hard Barron fans for it sets out the puzzle of trying to map out (literally!) the various repeated references to places and people as well as trying to make connections between his various stories where the same references occur. Lovecraft continually mixed real locations with his fictitious ones; thus his version of New England is often called “Lovecraft Country.” Since Barron is slowly doing the same with the American Northwest throughout his stories, before long we might be talking about “Barron Country” as well.

Laird Barron’s The Beautiful Thing That Awaits Us All continues to provide us with his gritty cosmic horror as well as other enjoyments. I highly recommend it!

James C. McGlothlin’s last review for us was of Laird Barron’s The Light is the Darkness.

[…] Thanks to James C. McGlothlin for the review of my new collection at Black Gate. […]

Cosmic Horror and Gritty Noir: A Review of The Beautiful Thing That Awaits Us All | Voodoo Buddha - Gaming News and Geek-Culture

[…] Cosmic Horror and Gritty Noir: A Review of The Beautiful Thing That Awaits Us All […]

Black Gate » Blog Archive » Amazon Discounts Laird Barron’s The Beautiful Thing That Awaits Us All to $1.99 for October

[…] his September 4th review for us, James McGlothlin […]

[…] first volume, the publishers have selected none other than the talented Laird Barron, author of The Beautiful Thing That Awaits Us All, The Croning, and The Light is the Darkness (great news!) Here’s the book […]

[…] is an excellent writer of horror and the weird, and personally one of my favorite authors. See here, here, and here. But is his anthology of the weird any […]

[…] writer of horror and the weird, and personally one of my favorite authors.  See my reviews of The Beautiful Thing That Awaits Us All, The Light is the Darkness, and The Croning. But is his anthology of the weird any […]