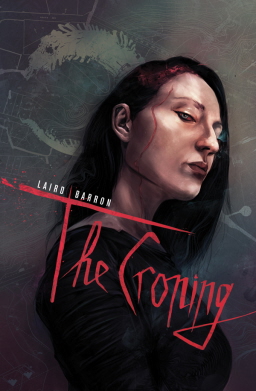 As regular readers of Black Gate are fully aware, the role-playing game Dungeons and Dragons has had a huge influence upon post-1970s fantasy writers and fans. A case in point, Tor.com is currently delivering a series of posts exploring Gary Gygax’s (the original creator of Dungeons and Dragons) suggested readings in Appendix N of the first edition Dungeon Masters Guide (the first two are here and here). The authors in this list are the usual suspects in fantasy literature: Robert E. Howard, Fritz Leiber, Michael Moorcock, etc. But one author that Gygax includes, that may be a surprise to some, is the horror writer Howard Philips Lovecraft.

However, veteran fantasy and other genre fans will likely see no incongruence here. For example, as a 13-year old intently reading the original Dungeons and Dragons book Deities and Demigods, I found the Cthulhu mythos section, based on Lovecraft’s horror fiction, to be just as inspiring for fantasy role-playing as the Greek and Norse mythos sections. I believe many others will agree that Lovecraftian horror has been a part of the sundry smorgasbord of fantasy for some time.

As veteran genre fans also well know, Lovecraft has spawned a cadre of authors who can be clearly identified as “Lovecraftian.” Such authors, in my opinion, fall into two broad and general groups. One group imitates Lovecraft by using the same sorts of tropes that he did: forbidden eldritch books, gibbous moons, tentacled monsters, mad cultists, etc. The second group writes more in the mood of Lovecraft, giving a general sense of nihilistic dread, sometimes called “cosmic horror.” I personally favor the latter group though there are some fine examples of the first.

Laird Barron is a fairly new horror writer who fits the squarely into the latter Lovecraftian group. His short story collections The Imago Sequence and Occultation are both often heralded as must-haves for horror fans, receiving the 2007 and 2010 Shirley Jackson awards, respectively. Barron’s stories range from eerie to the utterly terrifying, presenting a universe that gives small peeks into entities and realities that are at best indifferent to Earth and humanity’s fragile existence and sanity. 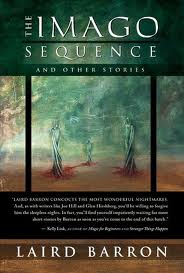 With such a terrific track record of horror short stories, many were wild with anticipation for the 2012 release of Barron’s first horror novel: The Croning. This book does not disappoint. I believe Barron successfully stretches his cosmic horror skills to the novel length. I’ll give a brief synopsis and highlights in the following.

The Croning starts with the re-telling of a fairytale that I personally was not very familiar with — the story of Rumpelstiltskin — though I believe Barron has taken some liberalities by adding some grisly details of his own. From this old medieval story, the book quickly shifts to the present day focusing upon a retired academic couple, Donald and Michelle. Barron relates most of the book from Donald’s point of view, who seemingly fits the somewhat comical absent-minded professor stereotype.

However, as the book progresses, Donald’s memories begin to coalesce, giving him insights to some of his wife’s goings and doings throughout the years. In typical Lovecraftian fashion, accumulated knowledge does not end up being a good thing as Donald regrettably discovers. Eventually as readers, we are shown glimpses of a connection between the horrors that Donald discovers and the original Rumpelstiltskin story, which unfortunately turns out not to be a fairytale after all. It should go without saying that things do not end exceptionally well for Donald.

Many horror fans have noted that the genre of horror often seems at its best in short story or novella length. Many agree that the emotion of art-horror (see Noël Carroll’s The Philosophy of Horror) seems harder to sustain well in longer works. Barron overcomes this setback by giving short episodes throughout The Croning that give peak tease to this emotion. 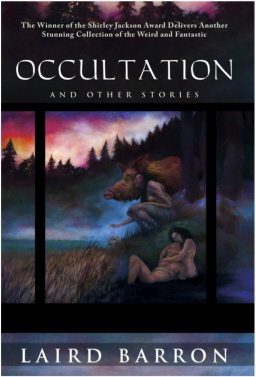 For example, at one point Donald’s family is around the homestead fireplace at night telling stories. One particularly frightful story is Donald’s son Kurt re-telling a “real life” experience with a ghost or witch when he worked at a department store in high school. You get the sense that the story will be corny, but it turns out to be very chilling scene. (I’ve read The Croning twice and both times this scene gave me goose bumps — excellente!) There are several such episodes throughout the book.

Barron is also highly adept at just hinting at the horrible—something that somehow makes the horror even worse.  One example, in the Rumpelstiltskin section at the beginning of The Croning, a character is sharing a cave, and some suspect smoking material, with a stranger who happens to be a dwarf:

An exceedingly odd thing disquieted the Peddler. Perhaps his senses were distorted by whatever powerful herb was percolating in the hookah barrel; nonetheless, he’d received a fright when at one point it appeared the Dwarf’s face was melting . . . the Peddler collapsed unconscious . . . (p.21).

Creepy! Was it just the effects of the drug?  Or did the Peddler get a quick glance at reality? Though such experiences are ambiguous for Barron’s characters, as readers Barron clearly hints at more horrible implications.

I still remember “Hallucigenia” from F&SF back in 2006. Really creepy stuff.

“Hallucigenia” is still probably my favorite short story of Barron’s. At one time on his website Barron showed some artwork from someone doing a comics adaptation of the story. I don’t know what became of it though.

Except for the last couple hundred words, I thought “The Imago Sequence” was a waste of my time, so of course it had to be short-listed for all the awards and best-ofs. “Hallucigenia,” on the other hand, I thoroughly enjoyed. So I want to read the novel, but I would approach it with great caution.

James, I’m ashamed to admit I haven’t read any Barron and this post makes me want to change that. I knew I was missing something, but an author who can write long-form horror in this style is rare.

When I think of cosmic horror at novel length, I tend to think of T.E.D. Klein’s The Ceremonies as being the finest example I’ve found. Ever read that one?

Barron cites Klein as one of his favorite authors. I have read (and own) The Ceremonies and I liked it. And yes it is a fine example of cosmic horror at the novel length. The Croning is similar to it, in some ways. However, I think Klein’s short story “The Events at Poroth Farm”, which The Ceremonies is based on, is superior in its horrific affect.

As much as I love The Croning, I still think horror is usually best in short form. I suggest grabbing a copy of Barron’s The Imago Sequence or Occultation first before diving into The Croning.

Yes, the story, not the collection. If I recall correctly, GVG said it was one of the most loved stories in F&SF that year.

Great for Barron, but I can think a dozen other of his tales that are much better than “The Imago Sequence” (again, even though I like story personally). Maybe F&SF had a slow year when it came out.

Perhaps on a similar note, Barron’s horror is sometimes called “literary horror.” I suppose because it’s of such a good quality compared to many horror writers. If that’s the criteria Caitlin Kiernan’s stuff also counts (though she’s obviously an excellent writer, personally I don’t find her stories very scary).

Black Gate » Blog Archive » Riddles, Intrigue, Occult and Super-Science: A Review of Laird Barron’s The Light is the Darkness

[…] my last post I reviewed The Croning, Barron’s keenly awaited debut novel after the success of his award […]

Black Gate » Blog Archive » Cosmic Horror and Gritty Noir: A Review of The Beautiful Thing That Awaits Us All

[…] award-winning collections The Imago Sequence and Occultation, as well as his 2012 debut novel The Croning. As with his prior volumes, this one continues to meet, and exceed, the bar of contemporary horror […]

Black Gate » Blog Archive » Amazon Discounts Laird Barron’s The Beautiful Thing That Awaits Us All to $1.99 for October

[…] Award-winning collections The Imago Sequence and Occultation, as well as his 2012 debut novel, The Croning. As with his prior volumes, this one continues to meet, and exceed, the bar of contemporary horror […]

[…] none other than the talented Laird Barron, author of The Beautiful Thing That Awaits Us All, The Croning, and The Light is the Darkness. (Great news!) Here’s the book […]