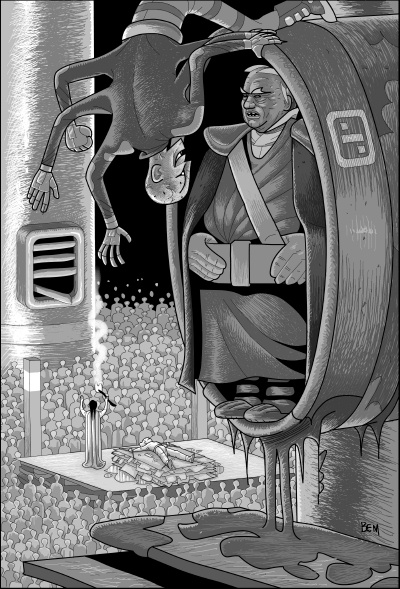 Fat Jack and the Spider Clown went to see the burning of the King. They made their way through vasty metalwork corroded to a point somewhere between utility and oblivion, casually avoiding the feral children and angry cats that haunted those rusty tunnels, feeding on one another in a failed ecology of diminishing returns. As the two of them came to a pipe-end overlooking the habitable zones from high above, Conflagration Day brightened with the pallid, marbled light that slunk down into the metal bowels of the world to stand in for dawn.

“Some Kingsguard puke came creeping through the tunnels last week,” mumbled Fat Jack through lips like bundled fingers. “Thinks I’m a big man.” His laugh was the hollow sound of a corpse beaten with iron staves. “His mistake.”

Hanging from the upper rim of the pipe, the Spider Clown cackled. “Big, yes. Thinking you’re a man, there’s his mistake.” Too many gray hands worried at old scars on his face and neck above his worn leather armor. “And what was his desire?”

“Power. Access. Data.” Fat Jack shrugged, the red mesh of his robes rippling. “What a uniform always wants once you stuff a man into it. He sought a map. Asked the way to Day Cart Junction.”

The Spider Clown glanced upward, at the pipes filling the metal sky and the flickering lights of the world shining down between them. “Hah. As if any of them were ready for Day Cart Junction yet. I trust you demonstrated the error of his ways.” He shaded his various eyes against the morning gloom and stared across the wide spaces below them toward the Field of Kings. “Uniforms… I am thinking the Kingsguard is not to make a good morning of it.”

Fat Jack launched another laugh that burbled into damp oblivion. “Harder to burn a uniform with the man still in it. That’s why I never followed the flag.”

“A fig for the flag and follow me,” cried the Spider Clown. “Away, the day stinks of opportunity!” He dropped to scuttle down through the clustered fall of pipes and ladders, toward the busying Field of Kings, Fat Jack picking his slow climb behind. Only the silent bones of cats and children witnessed their descent.

The bier loomed high, an accretion of broken furniture, storage pallets and less identifiable organic detritus. Sharp-scented accelerants roughened the air, rupturing the strained dignity of the crowd with sniffs and coughs. A crude stair of hammered scrap led up to the platform upon which the old King lay, straining against leather bonds.

“He pleads for mercy,” giggled the Spider Clown to Fat Jack, “that former princeling who so quickly set the torch when he was acclaimed monarch a generation ago.” The crowd let them pass forward; fear, respect and revulsion being universal solvents for clotted gatherings of men.

“Declaim,” muttered Fat Jack, whose breath steamed in the cold. “Declamations are your work here, not small jokes.”

“Time will be right when I am,” said the Spider Clown.

“Greetings.” A smooth voice spoke from behind them, secure in the cultured accents of the court.

Fat Jack turned to see a bas-Colonel handsome in his blond youth and the maroon dress uniform of the Kingsguard, carrying a baton with ribbons signifying both military and administrative command. The young man had the look of the royal family about his face. “Officer,” Fat Jack croaked, broken gray teeth in his notional smile.

“Are you here to witness on behalf of your, ah… own authority?”

“We are come for a stroll in the Field of Kings,” screeched the Spider Clown, “to be watching for fires, failures and such things.” His arms flailed like a flock of drunken birds.

Fat Jack closed his smile. “We claim right of presence by ancient privilege, standing in for Crew above.”

“Witness, then, and be welcome.” The bas-Colonel bowed to cover the lie that rang in his voice. “And how are things Above?”

The Spider Clown danced a staggered jig. “Come see for yourself, if you disdain your health.”

“Sadly, I fear I am forced to decline your generous invitation. For now. Good morning to both of you.”

Fat Jack watched the bas-Colonel return to his arrayed ranks of Kingsguard. “Must you talk like that?” he asked the Spider Clown.

“Ã¢â‚¬ËœTis expected. I but live to delight, and dread to disappoint. Declamation is not for simple mouths.”

Above them the King continued to squirm upon his ragged bier.

Wrapped in wine-dark brocade, the sullen priest whined through the ending of his invocation. “…and let all the counsels of men be taken anew when the sky is seen to open. By grace of Crew and the Lords of Light, the King shall fall, return through Day Cart Junction, and rise again with the golden light of the Solar Star.”

The priest raised his tattooed face to the dark pipes of the ceiling of the world for a moment, then regarded the crowd from his temporary post atop the bier. “Is there any here with cause to bespeak the passing of the Crown?”

Behind the priest, the old King thrashed against the leather straps, his urgent moaning audible from some distance away. The bas-Colonel raised his baton just as the Spider Clown jumped onto the lower steps, his various arms milling in a confusion of joints. “I am here,” the Spider Clown shouted.

The priest winced and glanced at the bas-Colonel. The bas-Colonel nodded slightly as he lowered his baton again.

The Spider Clown spoke his piece. “I come from Above by ancient privilege to observe the passing of the Crown.” His voice deepened, acquiring resonance enough to reach the thousands in the crowd around the bier. “I come from Above, to honor Conflagration Day. Finally, I come from Above, to tell you that the gates of Day Cart Junction can be opened at any time, if only one sufficiently worthy will make the quest. A King so blessed will be allowed to leave this place and lead all his people into the warm daylight of the Solar Star.”

Fat Jack was sufficiently large and vicious to see them both through the ensuing riot, despite the best efforts of the bas-Colonel to have them struck down.

The complete version of “Fat Jack and the Spider Clown” appears in Black Gate 8.

3 thoughts on “Fiction Excerpt: “Fat Jack and the Spider Clown””