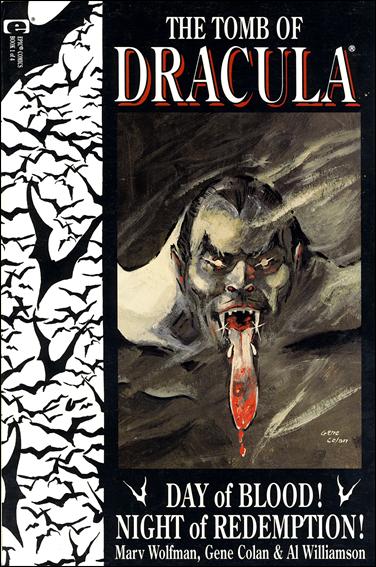 Marvel Comics’ mature readers imprint, Epic Comics, published a Tomb of Dracula limited series in 1991 entitled, “Day of Blood, Night of Redemption.” Marv Wolfman and Gene Colan reunited from the original series and teamed with Al Williamson to produce this visually stunning and highly ambitious four-part epic. The script faltered a bit by the end, as it really needed at least two more issues to realize its full potential; but this was an excellent effort and a welcome return to form that is deserving of more attention for its high standard of quality throughout.

The story gets underway with the introduction of two attractive young college students, Becky and Lila, who are having an affair. Becky is obsessed with the occult and unintentionally burns herself to death during a Satanic ritual one night after a rendezvous with Lila. From there, the scene shifts to a beautiful young attorney, Marlene McKenna, who is suffering from night terrors and under the care of Dr. Gregor Smirnoff. Marlene’s night terrors stem from the fact that she is married to Frank Drake and she has become obsessed with Frank’s ex-lover, the now deceased Rachel Van Helsing. Marlene has sought out her husband’s psychiatrist to treat her for her recurring nightmares of Dracula and belief that she is being possessed by the spirit of Rachel Van Helsing.

As the story progresses, we learn that it was Dr. Smirnoff who has led the students at Georgetown University, where he teaches, to practice Satanism just as he has been manipulating Frank and Marlene since introducing them to one another. Both experiments are the means to achieving his desire to locate Dracula’s remains and revive the vampire. These disparate sequences build up to a positively chilling scene where Marlene purposely disfigures her face with Frank’s razor in an attempt to emulate Rachel’s scarred visage.

Marv Wolfman’s script brings to the fore key elements of Stoker’s novel that are too often overlooked: crippling fear of infidelity; crippling fear of sexual inadequacy; crippling fear of death; and an obsession with the occult that ends in tragedy. Colan and Williamson’s artwork is perversely beautiful and the climactic moment in the first issue where Smirnoff revives Dracula, who stands up in his grave and speaks while maggots fall from his face and mouth, is absolutely spine-chilling. The story and artwork finally deliver on the unrealized promise of the stillborn black and white magazine version of the series from the previous decade. 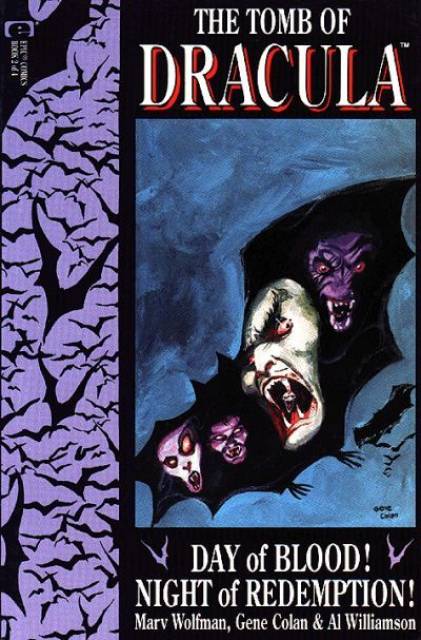 The second issue gets underway with the newly resurrected Dracula allying himself with Smirnoff, while Frank and Marlene flee for their lives. Marlene ends up institutionalized after suffering a complete mental breakdown from witnessing Dracula’s resurrection. Frank contacts his old ally, Blade the vampire hunter, who is now graying and decidedly unhinged. Together they pay a visit to Smirnoff’s home in Maryland, which Blade savagely vandalizes while Frank searches for clues.

Returning to America, Dracula makes his way to the nation’s capitol, where he feasts on strippers at a seedy men’s club. The resulting bloodbath is more gruesome than anything Colan has depicted previously. During a meeting at Georgetown University, Smirnoff pleads with Dracula to turn him into a vampire and grant the old man immortality. The Professor also begs Dracula to attend a party in D.C. he has arranged in the vampire’s honor that will be attended by the rich and powerful elite of American political circles. Dracula takes an interest in Lila, Smirnoff’s student who is grief-stricken at her lover’s accidental death during a Satanic rite gone wrong. Smirnoff informs Dracula he has successfully instituted a widespread network of Satanic cults on college campuses across the country.

Blade and Frank watch while Marlene’s doctor, an Eastern European albino woman named Katinka, demonstrates that Marlene is still under the vampire’s control. At the party in D.C., Dracula mixes with the influential and wealthy until a sexually aggressive woman irritates him and he pitches her off the balcony to her death. No sooner has this happened then the vampire is disturbed as he senses that his enemies have discovered his hiding place. The scene shifts to Dracula’s Virginia estate, which Frank and Blade torch to the ground. A furious Dracula vents his anger on Smirnoff in an unforgettable sequence that sees the vampire gouging the professor’s eyes out before decapitating him with his bare hands and tossing the severed head behind his back and kicking it aside with the heel of his boot. The final sequence shows Frank having fallen into despair over Marlene’s demonic possession, while Blade informs him he has a plan to use Marlene as bait to trap Dracula and end his menace forever. The second issue is very impressive, but lacks the pacing that made the first issue so successful. It is clear that, had the script been spread out over another issue, it would have appeared less rushed and would have given readers more time to appreciate the massive construct Marv Wolfman was shaping.

Great review! Given your description, I agree that the story seems rushed, or that there’s too much story, in the second issue. The last two paragraphs of your post seemingly spin out of control with details. The first issue sounded much more intriguing.

Look forward to reading your part two on this subject.