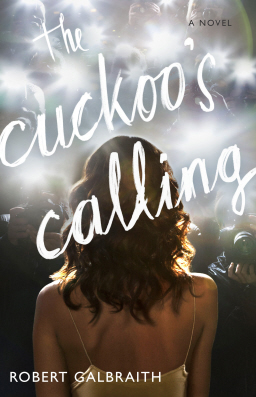 The book’s publisher has been touting the book as a “classic crime novel in the tradition of P.D. James and Ruth Rendell.” Up until yesterday, it had sold around 1,500 copies in hardback. But in the hours since its author was revealed, it has hit the bestseller list. Amazon is currently out of stock and listing it as shipping in 10 to 14 days (Barnes & Noble still has it in stock online). If you want a first edition hardcover, you better move fast.

The Sunday Times has reported that Rowling has completed a second novel featuring the same detective, Cormoran Strike. It is due next year. Rowling’s first novel for adults, The Casual Vacancy, was published last year.

After losing his leg to a land mine in Afghanistan, Cormoran Strike is barely scraping by as a private investigator. Strike is down to one client, and creditors are calling. He has also just broken up with his longtime girlfriend and is living in his office.

Then John Bristow walks through his door with an amazing story: His sister, the legendary supermodel Lula Landry, known to her friends as the Cuckoo, famously fell to her death a few months earlier. The police ruled it a suicide, but John refuses to believe that. The case plunges Strike into the world of multimillionaire beauties, rock-star boyfriends, and desperate designers, and it introduces him to every variety of pleasure, enticement, seduction, and delusion known to man.

The Cuckoo’s Calling was published April 30 by Mulholland Books. It is 464 pages, priced at $26 for the hardcover (if you can find one). You’ll have better luck with the digital edition, priced at $12.99.

Wouldn’t it be great if it really WASN’T J.K. Rowling–and this was just a scam to sell books? Would people even know that she didn’t write the book? Could they tell? Makes me wonder…

“Potter’s first novel for adults”? Shouldn’t that be Rowling’s? Unless Rowling actually ghost wrote the novels for a real Harry Potter . . .
What a horrifying thought.

I love how twisted your mind is. 🙂

And you’re absolutely right, of course. If I’d thought of this a little sooner, I would have spread a rumor that John R. Fultz was secretly J.K. Rowling. Or maybe James Enge or Peadar Ó Guilín. That would have helped move some copies of BLACK GATE!

> “Potter’s first novel for adults”? Shouldn’t that be Rowling’s?

Let me admit up front that Rowling clearly knows more about popular taste than any of us, since her books outsell religious texts, mood rings, and 2% milk combined, but I can’t be the only one who finds the plot summary, provided above, to be JUST PLAIN CORNY.

No need for rumors, John, just tell them the truth. *cough*Dan Brown*cough*.

> I can’t be the only one who finds the plot summary, provided above, to be JUST PLAIN CORNY.

I know what you mean… but then again, I completely disregarded the first two Harry Potter books as basically unoriginal fantasy. Shows what I know.

Besides, unlike almost any other writer I know, JK Rowling IS fabulously wealthy. If anyone can write with verisimilitude about the lives of the beautiful and wealthy, it’s her.

You bust me up, Peadar. Now, back to the dungeons producing more stories for us.

[…] then there was the whole Cuckoo’s Calling saga… The book dominated crime lists, and crime reviews in newspapers, and crime sections in […]