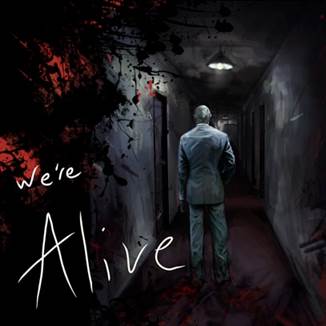 Welcome ladies and gentlemen. Before we begin, I should warn you that some of you may find what you are about to hear rather… disturbing.

Before TV and way before DVD’s and the Roku, home entertainment consisted of the family radio and more specifically the radio drama. As purely acoustic performances with no visual component, radio dramas depended on dialogue, music, sound effects and talented actors to help the listener imagine the characters and story, making radio drama the perfect mind theater to play host to some extremely effective tales of terror.

Inner Sanctum, Quiet Please, Suspense and The Shadow have become neo-classics with a cult following. But sadly, radio dramas in the US have become very difficult to find in the modern day, though they still enjoy mainstream popularity in the UK and Germany.

That is until KC Wayland and Shane Salk decided what the world really needed was a revival of the radio drama, or rather radio horror, and what better subject to explore than a zombie apocalypse?

These days, of course, no radio is required.

Point the web accessible device of your choice to www.zombiepodcast.com and discover what over a million of us other zombiephiles already know; We’re Alive is a contemporary radio drama about a zombie outbreak in Los Angeles and the band of survivors that are struggling to stay alive day to day.

And it is awesome.

Producers and stars Wayland and Salk have created what they call “a movie that you listen to.” A cast of around ten voice actors play the parts of roughly twenty five unique characters. The production values are high (I mean really high), especially when it comes to details like gunfire, explosions and the guttural moans of the undead; meaning it is fairly easy to imagine every head-splitting zombie take down and believe me, your imagination is way more graphic than any movie special effect. 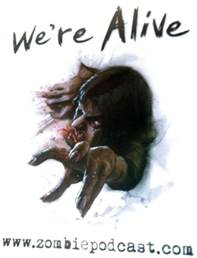 And equally important, the writing is pretty darn extraordinary as well.

The plot emphasis is on the characters and the human drama in a broken new landscape of fast-moving, super-strong undead.

For Army Reserve Soldier Michael Cross, the world as he knew it ended in an instant. One minute, he’s in college, and in the next, rioters are roaming the highway around him, breaking into cars, and literally tearing people apart. This is the day the dead walk. This is the world of We’re Alive.

Join our survivors as they band together, struggle to fortify a safe haven known as the Tower, and discovers that zombies are far from the worst thing in a post-apocalyptic Los Angeles where the rules of human decency no longer apply.

It seems wrong to call We’re Alive a breath of fresh air yet that that is exactly what it is. With movie CGI overloading our eyeballs with special effects that are often a barely adequate camouflage for a thin plotline, it’s darn right fun to once again take on the responsibility of conjuring up the visuals to go along with the story.

The series is divided into 20 minute episodes that become available most Monday mornings (three times a month). We’re Alive is into season four right now and every episode is available on their website.

And for an interesting peek behind the magic curtain, have a look at We’re Alive’s mini documentary, shot toward the end of their first season.

I love Old Time Radio, and for the past four years have posted at least one episode every weekend from the likes of Suspense, Inner Sanctum, Quiet Please, The Shadow, Lights Out!, Witch’s Tale, Mysterious Traveler, Escape, Dark fantasy and many more (including a lot of SF). Not only are they just cool to listen to but you can learn a lot of historical detail from the language used and the various advertisements (which I think would-be writers would find very valuable). I’m glad I’m not alone! 🙂

Thanks for sharing Dave and no, you’re definitely NOT alone. I own the entire Shadow series and consequentially understand what evil lurks in the heart of men…