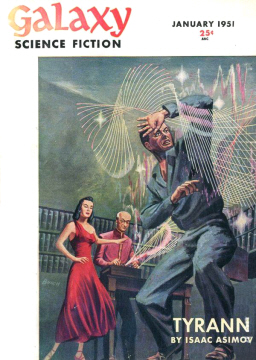 Galaxy Science Fiction’s fourth issue was published for January, 1951.  Now with 50% more illustrations, Galaxy was rolling along, ready to offer the best fiction on the market.

“Tyrann” by Isaac Asimov – This is the first part of a three-part serial of Asimov’s novel.  It was later reprinted under the title: The Stars, Like Dust.  Biron Farrill is a young nobleman visiting Earth when someone tries to kill him with a radiation bomb.  An acquaintance of Biron’s tells him that there’s a plot underway by the Tyranni.  The Tyranni, who control the galaxy by oppressing the various world leaders, killed Biron’s father and are now coming after him.

Biron flees to Rhodia in hopes of finding refuge under their leader, Hinrik V.  The Tyranni track Biron’s movement, allowing him to reach Rhodia in order to test Hinrik’s loyalty.  Soon after his arrival, however, Hinrik’s daughter and cousin confide in Biron that they are not loyal to the Tyranni and that the three of them must find a way to escape the planet without alerting the Tyranni.

I love this story so far.  The characters are great, especially Hinrik’s cousin who shows two personalities – one is a public façade in order to keep his work secretive.  Plus, their ships jump to hyperspace!

Asimov didn’t coin the term hyperspace, but he was one of its early adopters, and the way the jump is described will resonate well with Star Wars fans.  By the way, if FTL (Faster Than Light-speed) travel was good enough for Asimov and Galaxy, why is it shunned by some editors today? 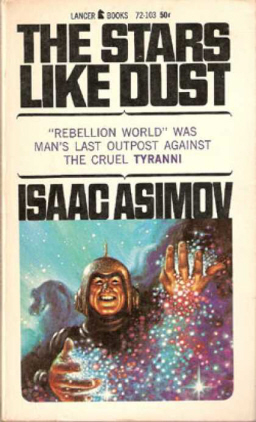 Also, I found this amusing note about the story on Wikipedia:

Asimov noted in his autobiography that the genesis of the [spoiler] subplot lay with H. L. Gold, editor of Galaxy magazine. Asimov felt that Gold’s judgment was at fault by attributing too much power to [more spoilers]. Asimov later considered the premise highly improbable, and became annoyed at Gold for having persuaded him to insert the subplot into the novel.

Ah, the warm interactions between author and editor.

“Dark Interlude” by Mack Reynolds and Fredric Brown – Jan Obreen travels back in time to the middle of the Twentieth Century.  His mission is to gather information since that history was lost, leaving only a vague understanding of ancient society.

The author’s tale follows two viewpoints – one from Jan’s perspective and another from someone Jan meets in Earth’s past.  It ends with a morality point on racism, which I found a bit unexpected, and I felt the delivery was off-putting.

“Rule of Three” by Theodore Sturgeon – Three energy entities, which are themselves triune beings, travel to Earth to look for energy viruses.  They discover the Earth is completely infested with the most vicious and contagious virus known.  In order to investigate the matter safely, the beings dissociate, encasing themselves within nine humans.

The story really took shape at the point that it focuses upon the human hosts.  Sturgeon’s way of describing music is amazing – so much so that I could virtually ignore some of the dated slang.  Besides the beginning and ending, the tale is light on science fiction and more about character development, but the writing is so strong that I didn’t mind.

“Made to Measure” by William Campbell Gault – Joe isn’t happy with his wife.  The Domestic Center provided him one of the best that could be built, but Joe objects that she’s too human.  He decides to create a new model – one that will be the perfect wife.

This was a quick read.  I had hopes it would turn into a dark comedy, where Joe’s creation would do something horrible instead of merely embarrassing him, but it works on its own level as a light-hearted comedy/romance.  Back in the day, I think someone could have made it into a date movie.

“Susceptibility” by John D. McDonald – Sean Malloy arrives at the colony on Able XII, perplexed as to why the colonists have abandoned the housing centers and barely utilized the field station.  He meets with their leader – an attractive young woman who works with her hands and loves the outdoors.  Everything Malloy encounters seems archaic, yet the colonists seem genuinely happy and fit, unlike anyone he’s seen before. 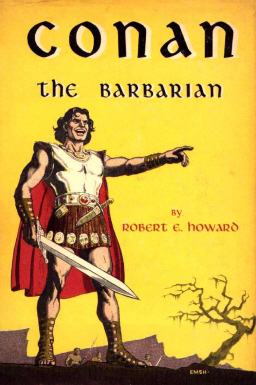 I liked the story’s premise, and McDonald executes it well. The plot ties together neatly, and I’m sure a number of readers would see a clear path for the story, but it’s still enjoyable.

“The Reluctant Heroes” by Frank M. Robinson – Chapman has lived on the moon for three years.  He came with the first research group of men and stayed on at the completion of their 18-month service in order to guide the second group.  Now, the second group’s service is ending, and Chapman is looking forward to getting back to Earth, where he can feel the warmth of the sun and be around a disparate populace.  But he’s so good at his job that the ones who sent him would do anything to get him to stay.

This was my favorite tale of the issue.  It’s gritty and real – how I think it would be for a handful of men dwelling on the moon.  It feels like science fiction that could become reality within the span of my lifetime.  I’m amazed at how detailed Robinson gets about being on the moon, considering that the tale was written almost two decades before we actually landed on it.  If you can find a copy of this story, I highly recommend reading it.  You can also listen to it as an X Minus One radio broadcast, though I don’t know how closely the radio program follows the short story.

I don’t usually mention the book reviews within Galaxy, but I thought Black Gate readers would be interested in one of the reviews from this issue.  Groff Conklin reviews Robert E. Howard’s book Conan the Conqueror, which is a reprint of The Hour of the Dragon that was in the 1935 pulps.  His thoughts are summed up well in his closing remarks: “For those who like to lean back and read with their minds closed, Conan will be highly acceptable and enjoyable.”

Read Matt’s review of the third issue of Galaxy here.

Many authors had a hard time with H. L. Gold’s heavy editorial hand. For example, he wanted Daniel Keyes to revise “Flowers for Algernon” to give it a happy ending. (Of course, and thankfully, Keyes refused, and sold the story to F&SF instead.)

Some writers did react well — Gold seemed in particular to be an effective editor for Alfred Bester.

One might note, by the way, that William Campbell Gault was a contributor to many fiction markets — pulp markets, mostly — back in the day; but that he was by far most famous for his sports fiction. Alas, the sports pulps are long gone …

For those interested, here’s the X Minus One episode, which ran on December 19, 1956.

I am so glad Daniel Keyes went with F&SF. “Flowers for Algernon” is my favorite story of all time (the novel was good, too, but I prefer the shorter version).

[…] Part 2 by Isaac Asimov – Part 1 of this serialized novel is in Galaxy’s January 1951 issue. In book form, the novel was published under the title The Stars, Like […]