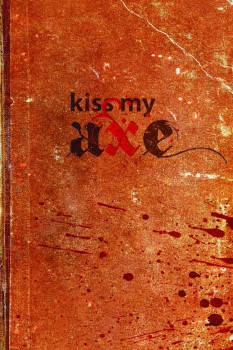 I don’t like to micro-manage, nor should I need to. However, the artist was not a professional – and that’s generally more of a judgement on actions and attitude than any kind of standing in the RPG industry. It was a tight deadline, but the artist assured me that would not be an issue. You can see where this is going.

After two weeks (with nothing from the artist), I dropped him a line requesting an update and providing a week’s extension on the final pieces due to other delays in the project. He replied with an “all’s well,” but nothing more. Due date for the pieces, and he sent me a few pictures, none of which were the scenes I had requested, and none of which were actually complete. I could make do with three of the six he had sent along, but made suggestions as to how they could be improved and requested them ASAP, as they would be overdue. 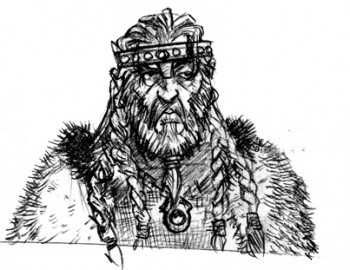 And I never heard from the artist again. Not a simple “I’m out.” Nothing.

As a supplement, Kieron O’Gorman, an artist who was part of my local gaming group, had doodled portraits while we were playtesting Kiss My Axe and I purchased them. They were intended to be incidental art, and I really couldn’t pass on buying them for the book because they were so good. Thankfully, I had those handy so I could do a “Quick & Dirty Edition,” kind of an Ashcan version for Gen Con 2011. I grabbed some public domain artwork as well, but hopes of original art like I had for Sword Noir were dashed.

This story does end on a happy note. At Gen Con, I met a friend’s son, Giovanni Lanza, who was involved in a game of Kiss My Axe. He had a blast, and did a sketch of his character. I liked it, and asked him to do some more for the book. That’s the rest of the art in Kiss My Axe.

It would have been nice to get the kind of art I had for Sword Noir, but I’m happy with Kiss My Axe. It has unfortunately left me cold on approaching or accepting solicitations from artists I don’t know. This is not a problem for my next project – Centurion: Legionaries of Rome – as Kieron O’Gorman will be doing the art for that book, and he is both a great artist and a professional. 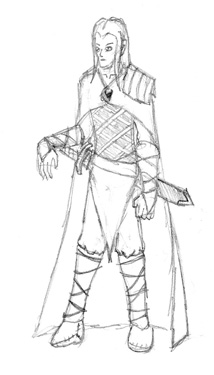 The lesson for people who want to break into the industry? Act professional. That’s the most important thing you can do. Listen to directions, and if you don’t want to follow those directions, explain why and provide your preferred alternatives. If you are being paid for your work, you need to follow the directions given. If you’re not being paid, you’re doing it wrong, but that’s a whole other discussion.

If your work will be delayed, communicate that and give an honest assessment of when you can deliver. If the artist had told me he couldn’t meet the deadline, I could have made alternate arrangements and maybe I could have picked up the art he did do for something later – though not at the same fee. Professional levels of payment are reserved for those acting professionally.

As the publisher, my requests were orders. As the project manager, my suggestions were directions. Be professional, and do as you are requested. Implement suggestions. Again, if you think you know better, explain your point of view, but once the decision is made, either do the job or tender your resignation.

Doing anything else means you’re an amateur.

Being professional is important for writers too.

I’ve heard these same sorts of stories from people in other types of media or publishing.

I am an academic philosopher and not meeting deadlines or requests is fairly unheard of in our profession (unless you’re a well-established prima donna at some Ivy League-like school).

Makes me think that if I ever wanted to take on a second job in some sort of other publishing, one thing that would immediately bode well for me is just the fact that I’m responsible in following directions. Hmmm . . .

mcglothlin: Maybe you’re joking, but let me tell you, that’s a huge bonus. When I was doing freelance work, I got a few opportunities specifically because I delivered on time and followed directions. I assume the previous work was also good, but if it had only been good work, I doubt I would have been approached for further work without the other two.

Given the connection to noir in this post, does Black Gate ever talk about noir works (as well as fantasy, sic-fi, and horror)? I’ve often noted how my favorite horror writer (Laird Barron!) writes very noir characters and scenarios.

Is there a strong connection between noir and our favorite genres here?

I think it may be that both sword & sorcery and hardboiled fiction were inspired, and maybe even grew out of the pulps, so I think there’s that overlap. I also find some characters very hardboiled, like Fafhrd and the Gray Mouser. Kind of why I went and developed the SWORD NOIR RPG.