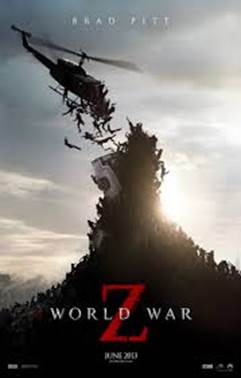 This week, Paramount Pictures released the first theatrical posters for Marc Forster’s World War Z, the zombie apocalypse movie based on the book by the same name, coming to a theater near you on June 21.

Now that’s what I call entertainment.

World War Z has been gaining notoriety ever since action stills of Pitt on set started hitting the Internet. The adaptation of author Max Brooks’s ‘oral history of the zombie war’ has had fans buzzing from the get-go, since the format of the book involved a U.N. employee interviewing survivors of the zompocalypse about their experiences – and the stills appear to show something entirely different.

Having just finished the book myself, I can understand the debate.

The WWZ novel is outstanding for its unusual approach to the first-person narrative, representing a possibly problematic format to translate to film.

Forster could have created the story in the style of a faux documentary, and initial chatter on the underground grapevine indicated that the WWZ film would indeed go this route, with U.N. worker Gerry Lane’s (Pitt) survivor interviews being the basis for flashback footage of grisly, zombie-war action.

It now appears WWZ the movie will be a significant departure from Brooks’s novel in both structure and story. 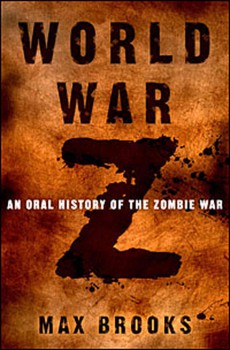 Paramount’s press kit packed a bit of an artistic bombshell in the form of the film’s synopsis:

The story revolves around United Nations employee Gerry Lane (Pitt), who traverses the world in a race against time to stop the Zombie pandemic that is toppling armies and governments and threatening to decimate humanity itself.

Clearly this is a massive change from the storyline in the novel.  Brooks’s tale addresses how the world would (or wouldn’t) be able to cope with massive disaster on a global scale and that premise provides a perfect framework for exploring all kinds of relevant political, social, and moral questions.

The WWZ movie is basically your tried-and-true, race-against-time action/thriller.

It also represents a substantial change to Gerry Lane’s character, who in the book is a man researching a global catastrophe while trying to gain some perspective on what it has done to humanity. In the movie, Lane is basically the reluctant hero who must overcome insurmountable odds to save the world.

I might have been willing to riot right along with the purists on this issue until one remembers that sometimes a movie that drastically departs from its source material can successfully stand on its own as a “same but different” endeavor; take The Shining, for example.

I thought WWZ the book was a brilliant and refreshing approach to the whole zombie horror theme and after seeing the trailer, I’m willing to give WWZ the movie an open-minded view as well.

Here, judge for yourself.

Did you read WWZ?  If so, what do you think based on what you know about the film version?  Post a comment or drop a line to sue@blackgate.com

Hear, hear. The latest trailer is very intense. Now, trailers have become an art unto themselves and cannot be trusted, but if Rotten Tomatoes has a score north of 50%, I’ll be seeing this one on the big screen.

How true. We can probably all name a movie whose trailer was far more worthy than the film itself.

I’m heartened though; Rotten Tomatoes is usually fairly accurate in their assessment. I’ll go if only to see the scene depicted in the poster…