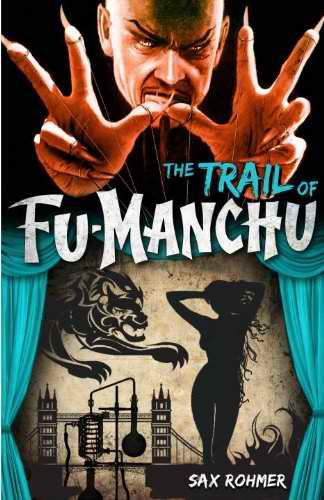 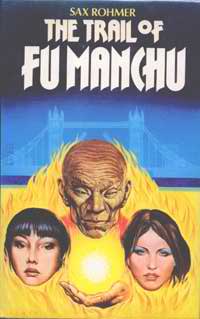 The story picks up in the aftermath of the Limehouse explosion one week earlier. Surprisingly, Sam Pak’s opium den only sustained minor structural damage. No bodies have been recovered, nor did the police launch sight any boat escaping on the Thames prior to the explosion. Sir Denis Nayland Smith and Chief Inspector Gallaho are hopeful that Fu Manchu might actually be dead, but unless bodies are recovered, Smith does not feel secure.

The matron watching over Fleurette Petrie during her captivity abandoned her post the night of the explosion, as did the Asian sidewalk vendor who kept vigil outside Sir Denis’s apartment. Smith takes both signs as suggestive that Fu Manchu is still at liberty. Proof arrives soon enough in the form of the constable who had the misfortune of standing guard at Pietro Ambroso’s studio at the beginning of the book. The constable leads Smith and Gallaho to chat up a night watchman on his beat, suggesting the man might have information that he will not completely share with the police. Smith passes himself off as a newspaperman and gains the night watchman’s trust through his generous nature and gift of gab. The man tells him how one week earlier, on the night of the Limehouse explosion, he saw a small party of Chinamen emerge from a manhole on the deserted street in the dead of night. Smith agrees it is an interesting story and that the police would never have believed him.

Rohmer switches the scene to Sir Denis’s apartment, where Fleurette is troubled to receive repeated telepathic commands from Fu Manchu. Fighting the urge to resist her brainwashing, she hears a noise from the kitchen and calls for Fey, but Sir Denis’s valet does not answer. Rohmer leaves the reader little doubt that Fleurette is about to fall back into the hands of the Si-Fan. 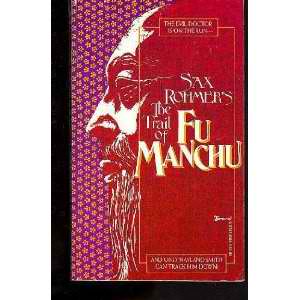 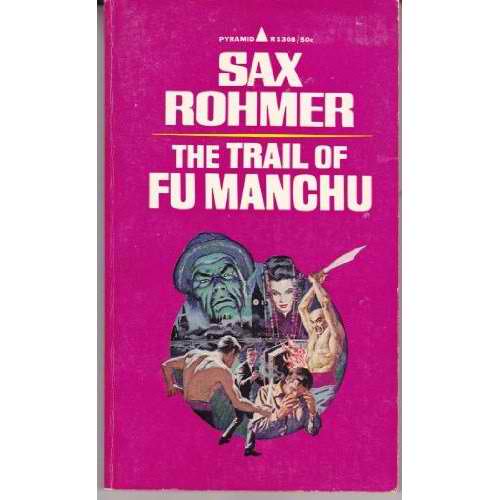 Smith and Gallaho enjoy a late dinner with Alan Sterling and Dr. Petrie before the group returns to Sir Denis’s apartment, where Sterling and the Petries are staying. Sir Denis is alerted when Fey does not greet him at the door and soon discovers his insensible valet lying on the ground. Fearing the worst, they are shocked to hear Fleurette singing in French. Rushing into the guest bedroom, they find her packing. She doesn’t recognize any of them and will only tell them she is waiting to be called and must not be delayed. Her father and her fiancé are beside themselves with grief. Gallaho suggests she is suffering from shock, but Smith suspects something far more fiendish in her queer behavior.

Gallaho is at a loss to explain how the incident could have occurred as he left several constables on guard outside of Sir Denis’s apartment and in the lobby. Fey recovers consciousness and relates to Smith and Dr. Petrie how he answered the door and saw their neighbor, Mrs. Crossland’s Egyptian valet Ibrahim, standing at the door with a camera. He snapped a photo in Fey’s face which released a gas that quickly overpowered him. Gallaho swears his men are certain that no one has left the building or the floor.

Smith and Gallaho rush to Mrs. Crossland’s apartment. Ibrahim answers the door. Smith accuses the Egyptian of being a member of the Si-Fan, but the valet denies all knowledge of any wrongdoing. Smith spies an Egyptian sarcophagus inside the apartment, but lacking a search warrant and just cause, their hands are tied. Gallaho orders a cordon thrown around the building. They return to Sir Denis’s apartment to have Fey tell them that Dr. Petrie was called to the lobby with a phone call from Dr. Fu Manchu. 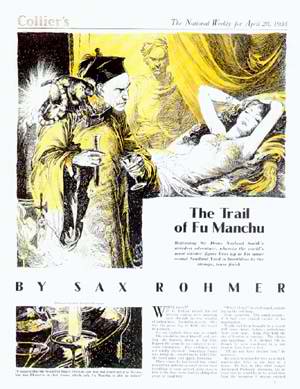 Rushing to the lobby, Smith and Gallaho find a distraught Petrie. While Gallaho attempts to have the call traced, Petrie relays the situation to Smith. Fu Manchu is cut off from his connections, thanks to Smith’s interference. He is dying and needs more of the Elixir Vitae produced to hold back the ravages of time. Unable to obtain the ingredients himself, he needs a physician he can trust. If Petrie wants his daughter’s sanity restored, he will aid Fu Manchu. If he betrays him and turns him over to the police, Fleurette will remain a madwoman. Rohmer’s recurring use of Fleurette singing French nursery rhymes in the background underscores the drama of the situation.

Smith gives his consent for Petrie to carry out Fu Manchu’s instructions without police interference. Petrie takes a taxi to Battersea, where he meets with John Ki (aka Sam Pak), whom he has not seen in twenty years. The old Chinaman brings him the last ingredient he needs for mixing the Elixir Vitae (the rest Petrie procured from a pharmacist). Petrie then takes a taxi to Limehouse, where he enters the home of a Japanese man who disguises Petrie so that he is not recognizable. Petrie assumes the Si-Fan does not trust he was not followed.

The waiting taxi takes the disguised Petrie back to Sir Denis’s apartment building, where Ibrahim meets Petrie at the door and conducts him to Mrs. Crossland’s apartment. They enter in front of Chief Inspector Gallaho himself, who fails to recognize Petrie, although he scrutinizes him closely as the Egyptian is under suspicion. Inside the apartment, Petrie learns he has been made up to resemble Mr. Crossland. He finds Fu Manchu lying on a bed near death. Petrie is handed the instructions to prepare the Elixir Vitae. Fu Manchu informs him that Fleurette was under his hypnotic control and that he has now released her as he is unsure if he will survive long enough for Petrie to save his life. 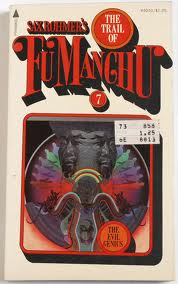 Gallaho is suspicious that Ibrahim has brought up someone disguised as his employer. Sir Denis refuses to allow him to take emergency police action until Dr. Petrie returns. Inside the Crossland apartment, Petrie administers the Elixir Vitae and watches in amazement as Dr. Fu Manchu is not only restored to health, but appears to age backwards until he is vital and powerful once more. Ibrahim enters with his real employer. Mr. Crossland is startled to see Petrie is his apparent double. Fu Manchu promises Petrie that he and his family have nothing more to fear from him.

A short time later, the real Mr. Crossland greets the professional movers he has called and, in front of Chief Inspector Gallaho, several pieces of furniture are removed from the apartment. Dr. Petrie then returns to Sir Denis’s apartment and embraces Fleurette, overjoyed to see her sanity restored as Fu Manchu promised. The final scene on the street below sees Mr. Crossland step into the moving van and open the lacquer cabinet which was removed from his apartment. Inside the cabinet, the reader learns Crossland has successfully smuggled Dr. Fu Manchu to freedom.

This final chapter depicting Petrie’s reunion with Fleurette was required by Rohmer’s editor. The author was rankled by this interference. After the author’s death, his widow saw to it that the Pyramid paperback editions of the 1960s and 1970s omitted this closing chapter that had not been part of Rohmer’s original manuscript. The reprints of the last forty years have varied as to whether the final scene appears or not. It is a minor point, I personally like the closing chapter well enough, but an explanation as to why it appears in some editions but not others seemed appropriate to address.