Sword’s Edge Publishing released its first product in 2004. Looking back, I think that the reason for starting the company were faulty. Not because it was self-publishing – self-publishing is considered “indy” for role-playing games and not frowned on as it is in fiction – but because myself and my initial partner in the venture wanted to publish rather than be publishers. That is an important distinction. We created SEP not because we wanted to start our own business, but because we wanted to have control over our creations. This is perhaps a laudable goal, but in hindsight I think we could have achieved artistic control without self-publishing.

In truth, while there were a few companies that might have been interested in the modern military adventures for the d20 RPG market – which is what SEP was producing – none of them were “publishers” in the sense that Wizards of the Coast (producers of Dungeons & Dragons), White Wulf (Vampire) or Steve Jackson Game (GURPS) were. Most were relatively successful self-publishers that had expanded into publishing the works of others. Given that these companies were mostly publishing PDFs and that the barrier for entry into the PDF market was low, we decided to just do it ourselves. As with punk rock, DIY has a certain cachet in RPGs. It didn’t necessarily indicate quality, but DIY certainly reflects passion.

Our first step was to create a partnership agreement. This was a very amateurish document, and were I to do the same thing again today, I think I’d spend the money on a lawyer – for that and to create some boilerplate contracts in case we ever needed writers or artists. Few small, independent RPG companies consult lawyers even for contracts – and that’s those companies that even use contracts. The big secret (maybe not so secret) is that few RPG companies are actually profitable, and so most don’t want to spend money on lawyers or any other professional consultant. 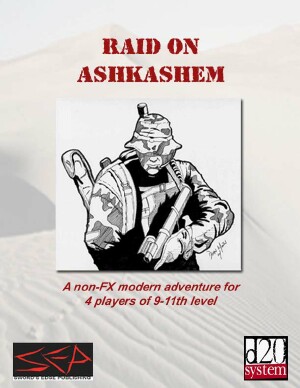 SEP was no different. We were a writer and an artist who wrote our own partnership agreement and laid-out our own product. It – unfortunately – shows in our first product. Raid on Ashkashem got good reviews, but it suffers by comparison with our later products, laid-out by a professional graphic artist.

After signing our partnership agreement, we got somewhat professional and acquired a business licence. While it is entirely possible – and incredibly common – for a self-publisher to simply DBA (“Do Business As”), a business licence provides a minor remove for the principles from the company. Given that most indy RPG self-publishers don’t have money for lawyers, many also don’t bother getting business licence. It’s not expensive and in Ontario, where I reside, pretty easy to do.

With our business licenced, and our product completed, we needed to get it out in front of the public. It’s pretty easy and cheap to get a domain name and a host. There are also many types of internet commerce software to allow one to sell directly from one’s site. Honestly, though, I am not confident enough with my technical skills to follow this route. SEP joined the main RPG PDF sales venue, which was RPG Now (now joined with Drive Thru RPG as One Book Shelf). One Book Shelf takes a cut of the sales but provides very robust service and a very popular place to display one’s wares.

And so we dove into the Abyss. We had goals and plans, though many of these were dropped or failed. Has SEP been successful? I am happy with its success, though I would always wish for greater success. The SEP of today is not the SEP from 2004, but that is likely true of any venture.

Very timely advice. I’m currently developing a Sword and Soul RPG with a fellow writer and a few artists. We just got a former White Wulf game designer and editor to look over our stuff and he likes what he sees. I have a LLC, but your advice on contracts is well taken. I’ve been discussing that with the rest of the crew. Thanks for the advice.

I’m glad to hear that this was helpful, Ndoro. I plan on posting some more thoughts on how SEP has changed through the years. I hope those will also be helpful.