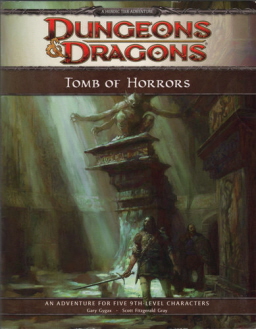 One of the more intriguing treasures I brought home from the Paris Fashion Week of Games last week was the compact new edition of Gary Gygax’s famous player-killer Tomb of Horrors.

Now, if you don’t play role playing games yet still find the name Tomb of Horrors oddly familiar, it’s probably because it’s a touchstone of considerable significance in geek culture and you’ve come across one of the many modern references to it. Most recently, for example, it featured in Ernest Cline’s best-selling novel Ready Player One, which is set in a virtual reality world created by a fan of Tomb of Horrors. Or maybe your older brother’s beloved 10th-level paladin was killed by an unspeakable thing 20 minutes after he set foot inside the Tomb, and he’s been suffering from PTSD ever since, muttering the name Acererak and shuddering uncontrollably.

The original Tomb of Horrors was released in 1978; it’s one of the best-selling Dungeons and Dragons adventure modules of all time. I’m not sure why, to be completely honest. You don’t have fun playing Tomb of Horrors, exactly. And it has certainly killed far, far more player characters than it has rewarded. You know the phrase “Bad things happen to good people?” It was first spoken by the few, shell-shocked survivors of Tomb of Horrors.

Despite — or perhaps because of — its killer rep, the module is still highly regarded today, and has been remade and expanded several times, most recently as a 4th Edition hardcover by Ari Marmell and Scott Fitzgerald Gray in July 2010. This isn’t that version. This is a bare-bones conversion of the original adventure for 4th Edition rules, written by Scott Fitzgerald Gray and mailed out to members of the RPGA as part of the DM Rewards program. Instead of the separate art booklet — one of the most famous features of the original release, which allowed players to gawk in wonder at detailed renderings of the horrific things that had just killed them — this edition incorporates most of the original art into the body of the module. The cover is also recycled from the 2002 Greyhawk novel of the same name by Keith Francis Strohm (which we last discussed in “The Seven Greyhawk Classics of the Ancient World,” here).

For all that, it’s still fun to sit down and re-read Gygax’s original sadistic masterpiece again. The layout is clean and attractive, and the map of Acererak’s tomb has been given new life as a detailed color fold-out. Since it was never offered to retailers it’s a little tricky to find, however, and prices vary widely. As it was originally offered for free, some folks re-sell it at a reasonable price; but the average asking price I found on eBay was just over $50. I paid $7 for a shrinkwraped copy at auction.

Tomb of Horrors, by Gary Gygax and Scott Fitzgerald Gray, was published by Wizards of the Coast in 2010. It is a 4th Edition Dungeons & Dragons adventure for five 9th-level characters. It is 36 pages in softcover, with a loose cardstock cover and a fold-out color map. It has no price.

Bah, a 1st level character can run the whole thing and survive…

I think you meant run FROM the whole thing and survive… 🙂

Ah, yes, the TOMB OF HORRORS…just hearing the name creates an evil, cackling laughter in the back of my head. That’s Old Acererak…

As a kid what made this module the KING of modules was the 36-page VISUAL AIDS booklet. Terrific artwork that brought the fiendish traps, macabre creatures, and ancient architecture to life. This may be the deadliest dungeon ever invented–but if a party really played it smart they could beat it. The traps in this tomb are so vicious and brilliant–yet they all work with the same twisted logic to serve the ultimate purpose: To hide the true resting place of the Demi-Lich. This was a dungeon that was written specifically to annihliate the “hack-and-slash” style of player. If you didn’t use your brain in this module, you were dead quick–or endlessly imprisoned–or otherwise doomed forever. Another common result from this dungeon was characters losing every single magical (and non-magical item) by walking through a particular enchanted archway. What better challenge for high-levels dripping with magical items to be reduced back to the bare basics of survival?

In a fit of nostalgia for my misspent youth, I ran this classic dungeon again about two years back, with a group of characters playing under my Modified AD&D AGE OF KULL rules. It was a blast–in a party of three PCs and one NPC follower, two of the PCs had their souls sucked out (bodies annihilated) in the final clash with Acererak, and the last PC was down to his last handful of hit points. With the next role of initiative, the last remaining PC–leader of the group–was sure to have his soul sucked as well. The only one left with an attack was the NPC…who rolled a Natural 20 and cracked the Demi-Lich’s skull into dust. There was much cheering because the battle was a long and nearly fatal one. (This party had previously faced Lolth, Demon Queen of Spiders in her Demonweb lair and actually slain her there!)

Luckily the one surviving PC had a Ring of Wishes with one wish remaining, and with that wish he restored the soul-sucked characters into fresh new bodies. This was one of those legendary sessions where the survival of the entire party fell into the hands of a follower who was saved from a Drow dungeon several sessions earlier–a captive taken from the Temple of Lolth who ended up saving the party with his lucky blow against the Demi-Lich.

It was Karma in action…

Later, this party wouldn’t fare so well when they went up against Mephistopholes–they’d still be imprisoned on the 9th Plane of Hell if Ningauble of the Seven Eyes hadn’t taken pity on them and rescued them. Soon after, they decided to retire on the slopes of Olympus…

Sadly, I’m not sure how I would (or if I can) actually embed an image in the comment thread.

Jeepers creepers. Did my sister have nightmares because I sent her and a few friends through this death-machine of a module, or would she have had them anyway? Five ninth level characters? More like fifteen. Or fifty.

That’s an epic tale! Karma in action, indeed. Nothing like a loyal non-player character coming through for the party in a pinch.

And you’re definitely right about the art booklet. It was totally revolutionary at the time. It made the contents of the tomb vastly more vivid, and fascinated me long before I ever ran the module.

Ha! Not sure where you found that, but I’d love a poster for my wall.

[For those unfamiliar with the module, that’s a portal that instantly annihiliated anyone who climbed through it. And the words “Free Ice Cream” are NOT part of the original.]

Fifty would be better. Although I have no doubt in my mind that this module could kill all 50 if they weren’t careful.

They also had illustration booklets in S3 (Expedition to the Barrier Peaks) and C1 (Hidden Shrine of Tamoanchan). But both of those came a couple of years after Tomb of Horrors, and I’m not sure if there were any others.

Wow, that just takes me back …

When younger players think of the “world” of D&D, the feel of it, the backdrop, they may think of the slick artwork in later editions, or the lush, full-color landscapes of video games: for me, the feel of D&D will always be best expressed by those illustration booklets from “Hidden Shrine of Tamoanchan” and “Tomb of Horrors.”

[…] Rick Welleran tells of his adventures in The World of Greyhawk and the dreaded Tomb of Horrors: […]

> for me, the feel of D&D will always be best expressed by those illustration booklets from “Hidden Shrine of Tamoanchan” and “Tomb of Horrors.”

I hadn’t even realized how true that was until you said it, Nick. But yes, it was the artwork that defined the sinister mood and mysterious nature of the traps and creatures in both modules, and made me ache to play them when I first opened them.

[…] Tomb of Horrors gets a Fourth Edition Makeover […]

[…] able to bring myself to tear open the shrinkwrap, but that didn’t stop me from writing a review. (You need mad skillz to assess a book by peering at its airtight edges, let me tell […]

[…] intentionally creating a meat-grinder scenario (think Gygax’s Tomb Of Horrors module, discussed ELSEWHERE on this site), referees will always be outnumbered; it’s one mind against the hive mind and the […]