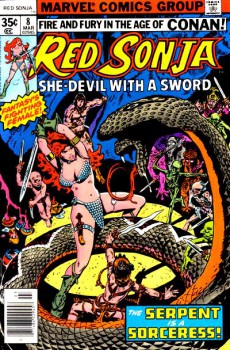 When we last left Red Sonja, she was about to be hung for killing some guy twenty issues ago. Last month, Oryx, a mammoth-riding bully, decided to turn her in to the victim’s family for a reward. Apparently, he opted for the dead option in dead or alive.

This issues begins with Sonja managing a few more insults and even a good kick before she’s cut free of the noose by Suumaro, Oryx’s brother and local outcast.

His motive? Why, he wants to make Red Sonja his wife, of course. Poor Suumaro.

So after a rooftop fight with a couple of thugs, Sonja and Suumaro (oh, both their names start with S – they could use the same monogrammed towels) are out of the fort and into the surrounding hills, where they find his military camp. It seems that Summaro wasn’t the only one cast out of the fort. He apparently sneaks back in every now and again to gather intelligence against the day when his army takes it back. And after watching Red Sonja fight, he invites her to join his army.

Thing is, Red Sonja’s been around the block a few times. She knows how this thing goes. And she’s met her share of guys claiming to be impressed by her prowess in battle, when in fact they’re just trying to get her out of her chain mail. She asks Suumaro point-blank if he’s got a wife and his answer is, “I’ve got several … but that is of little consequence to me at this moment.”

Red flag. Two red flags, actually. Red flag one? He’s got multiple wives. Sonja’s just escaped the noose for murdering one polygamist and this could be a terrible trend. Red flag two? His wives are of little consequence to him.

Sonja should just steal a horse and leave the hills, the fort, and the two warring brothers behind her. But instead, she asks him why he rescued her and brought her to his tent. “A woman such as you is a rarity … and I treasure all things that are uncommon.” Red flag three.

Inside the tent is an over-sized throne covered in fangs. That flag isn’t even red. It’s black. If you walk into a room with a fang-covered throne, just leave. Don’t thank your host. Don’t make excuses. Steal a horse or a car or a motorcycle or whatever is handy and get out. It’s never a good idea to sit on anything with fangs.

Sure enough, a giant cobra slithers out from behind the nightmare throne. Suumaro warns Sonja not to attack it, but she’s probably relieved to see the cobra. Giant snakes … that’s old hat for Red Sonja. She keeps her sword at the ready while the cobra circles around her. Suumaro keeps telling her she’ll be fine if she doesn’t attack and the snake keeps circling without striking.

And then the cobra turns into a ring of fire. But she’s still holding her sword, because magic doesn’t freak her out nearly so much as it used to do. But Suumaro keeps urging her to drop her weapon.

Finally, he walks toward her, promising that he will walk right into the flame if she doesn’t drop her sword, so certain is he that the fire-cobra can be trusted not to harm either of them. Choosing to trust him, she finally casts aside the sword. The flames die away and the cobra returns. Red Sonja has passed this strange rite of initiation, an ancient version of the modern-day trust fall.

And then the cobra bites her.

Its fangs go right into her arm.

Then the cobra turns into a tree. The same tree that extended its roots for Sonja to climb last issue. (Yeah, Red Sonja recognizes a tree she saw the previous day. Suspension of disbelief.) And buried within the branches, a woman’s face stares out at her for several seconds before both tree and face fade to nothing.

Apparently, the whole affair was just a test given by Suumaro’s mother to determine whether or not Sonja was worthy to serve in his army. Did I mention Suumaro’s mother was a witch? Well, neither did he. The whole cobra test is just something he likes to spring on people, apparently.

So, let’s take a paragraph to consider Suumaro, brother to Oryx and leader of the revolution. He’s dressed in a loin-cloth, maintains a harem, keeps monkeys and leopards as companions, and has a bizarre relationship with his mother. Like a mix-up of Tarzan and Michael Jackson, with some Norman Bates thrown in to keep it interesting.

I’ve lost track of all the red flags. I’m actually screaming at a comic book, “Get the hell out of there!” But Red Sonja never listens to me and everyone else on the bus is staring at me, so let’s move on.

The two of them pass the harem tent and Suumaro takes this chance to introduce Sonja to one of his generals, Jimodo, who assumes that Sonja is a new wife to add to the harem. Suumaro is outraged that Jimodo would mistake a great warrior like Sonja for something so lowly as one of his wives. Remember, between Oryx and Suumaro, Suumaro was the “good” brother.

Sonja gets close enough to the tent to see the women of the harem. The first thing she notices? Each of the women is bound in chains. Jimodo explains that the chains are merely there to prevent Suumaro’s wives from escaping.

As punishment for freeing Suumaro’s captives (I mean, beloved wives), Red Sonja must face Jimodo in combat. Jimodo doesn’t mean to kill her, of course, merely beat her until she accepts her place as being subservient to a man. Red Sonja, on the other hand, does mean to kill him. Kill him a lot.

And then it all comes back to that bridge from last issue. The bridge that Red Sonja could have crossed safely if she hadn’t insisted on bringing her horse with her.

A dead mammoth is being hauled out of the camp to be burned; but the mammoth haulers stop working so they can watch Jimodo and Sonja fight. She’s wearing her two-piece chain mail bikini and he’s wearing a plus-sized loin cloth, so there’s not much armor on either of them; but Jimodo is easily twice Sonja’s size, a towering fat guy armed with both a mace and a whip. Using the whip, he goads her back until she’s up against the dead mammoth, at which point she climbs the carcass to gain the higher ground. He follows her up and then the two of them are standing above everyone else on the gas-bloated belly of a dead mammoth. Except that Sonja weighs half what Jimodo weighs, so while her weight is supported by the rotting muscles of the beast, his weight …

This is really disgusting.

Jimodo sinks through the rotten muscles and into the guts of a dead mammoth. He’s slipping down through broken intestine and half-digested food as sure as if it was quicksand. And just before his head sinks into this putrid mire, Red Sonja drives her sword into his face.

The sword-stroke is enough to make her lose her balance, however, so that she falls in through the same intestinal rip as Jimodo. And both of them are gone from sight for a handful of seconds … until Red Sonja slices her way through the beast’s belly, grinning in triumph.

At this point, Suumaro assures her that he knew all along that she’d win and had intended to stop the fight before things went too far, but, you know … stuff happened. Then he re-states his invitation for her to join his army. She agrees, but only if she gets Jimodo’s old rank.

And at that point, I’m swearing in disbelief. Why in seven hells would she take a job with a man who kept slave-wives? Who let her get bitten by his giant cobra mommy? My only guess, my hope, is that she’s planning some colossal sting to take down Suumaro and Oryx together, freeing both parties from the rule of these bullying maniacs.

We’ll find out next issue.

Next Week: Red Sonja Doesn’t Care About Your Mommy Issues