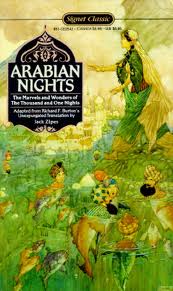 In a work as varied as The Arabian Nights there are naturally some portions more popular than others, probably because some are more easily adapted into standalone tales of adventure. I think we in the West are more familiar with the Nights as a concept than a whole, and many of us have only read or watched adaptions of the most famous of the tales.

Don’t presume that means that the best of the stories have all been filmed and that there is no point reading the rest. There are plenty of excellent, lesser known yarns within, and surely part of the fun of reading the nights is watching the puzzle box interrelation of stories within stories within stories. Admittedly, there are some portions that I don’t like as well and don’t revisit, as with any short story anthology, and many people feel the same, although you’re likely to get a slightly different list of favorites from whomever you speak with.

Today I want to draw attention to one of my favorite sections, “The Wily Dalilah and Her Daughter Zaynab.” If you’ve ever read my musings, you might expect this to be a tale of swashbuckling adventure set in distant locales, swimming with magic rings and djinn and evil wizards. “The Wily Dalilah,” though, is set only in Baghdad, and there is no magic to speak of within the entire story. There are no daring princes with swords, or mysteries, only a clever old woman running a series of con games. Over the course of the narrative, Dalilah, with occasional aid from Zaynab, foments so much trouble in Baghdad that she draws down the attention of the caliph himself.

I’ve encountered fantasy fans who aren’t interested in The Arabian Nights because they assume they will find heaps of sexism within the text. Well, yes… and no. Yes, you will find a patriarchal society, as you will when reading about most ancient cultures. But you will find women instrumental throughout many of the stories, and not just as objects to be won by questing young noblemen. The entire story sequence, remember, is told by a masterful storyteller outwitting a man so that she might live. But there are other prominent women within the story cycle apart from Scheherazade.

My favorite of all of them is Dalilah. Recently rendered destitute and infuriated that two notorious swindlers have been elevated to positions of power within the city of Baghdad, Dalilah launches a campaign to show Baghdad she can out-scoundrel the scoundrels. Through disguise and broad, bold-faced lies, Dalilah scams the unwary in a series of broad, low-comedy schemes. She so enrages the merchants that the police are called in. Captured in the evening, Dalilah goes to sleep near her guards, and the witnesses against her bed down outside. Dalilah wakens, pads past the guards, but, not satisfied with merely escaping, lies to the wife of the police chief and, pointing to the sleeping witnesses, says that she has brought the five mameluke slaves that her husband had asked for. As a result she makes off with a thousand dinars.

Caught again, Dalilah is tied to a post outside the city as punishment, then convinces a foolish Bedouin that she’s been left there because she refuses to eat  honeyed fritters. Eager for heaps of the fried dessert, the Bedouin swaps her places. In the morning, the guards, rather than finding an old woman, see a young Bedouin insistently demanding to be given his pastry treats. 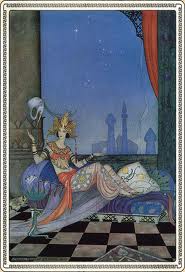 Dalilah continues to wreak mayhem and accrue financial gain. In the end, the only person who can sort out the whole affair is the caliph himself, Haroun al-Rashid. After hearing the whole tale, and after Dalilah has returned the stolen goods and money, he rewards her (and her daughter, who was up to some additional mischief) with higher stations in Baghdad. Dalilah’s late husband had been town captain of the city, and she is appointed in his place, and given stewardship of the caliph’s special inn, which is tended by many slaves and servants.

There are a lot of ways to read the tale. If you just want to enjoy it for the surface details, it’s guaranteed to raise a few smiles, for Dalilah is genuinely clever and the setups are elaborate and humorous. Yet there’s a subversive air to the text. Dalilah does not gain justice or enrich herself by playing by the rules. She sets out to break the system and call attention to the idiots holding the finances and enforcing the dictates of the government. The wealthy class of merchants and those in positions of power, including their minions the city guards, are made time and time again to look like buffoons — although the country rube and the drug addict don’t escape a few laughs at their expense as well.

I can’t help wondering what the original listeners to the tale were thinking as they heard it. Surely they laughed as the hashish eater went crying through the city for his missing ass, but were they, too, thinking about the disparity of their station and those in the higher echelons of society? Were the women in the audience chuckling as the men fell again and again upon their faces while trying to catch up to Dalilah?

I re-read it from time to time because it’s loaded with great details about the habits of ordinary men and women of the time, complete to an argument between a married couple that both end up, rather touchingly, feeling regret for it. But I also re-read it because it cracks me up.

I am nowhere near as well read in the 1001 Nights as I ought to be, and I have not read this tale.
Man, it sounds grand.
The bit with the honeyed fritters and the gullible bedouin almost has the savor of Twain’s Tom Sawyer.

I remember thinking, the first time I read it, that the fellow was the ancient Middle-East equivalent of the country bumpkin.

It’s amazing how selective our knowledge is of all sorts of tales and folklore.

I read the first Zipes volume about 20 years ago; it and the second are sitting on my shelf. I also remember, when I was young, some random hardcover (Reader’s Digest Condensed or some such) with lovely black & white illustrations. Any recommendations on good editions?

At the risk of sounding like far worse than a jerk, I am something of an amateur ‘Arabian Nights’ ( which I prefer to call The Nights or just Nights ) ‘scholar’.

I’ve been pretty well hung up on this thing since I found a Sir Richard Francis Burton edition in my grandfathers’ library.

I was led to the nights by Poes’
‘The Thousand, and Second Tale of Scheherazade.’

The Sir Richard Francis Burton translation is my favourite.

Though The Nights is complex + other translations are advisable for a full understanding of this work.

The J.C. Mardrus, + Husain Haddawy translations are excellent to round out ones appreciation of The Nights’ complex history in English.

If any one else can read French, a French ( duh ) version of the oldest European translation by Antoine Galland is great for the purist.

If any one really want’s to be a purist reading the first popular Japanese translation ‘The Most Curious Book in the Whole World’, is a great follow-up to the Galland translation.

I have a hard time making it through Burton’s edition these days because of some stilted phrasing, and once I read the introduction to Haddway’s translations, explaining the various issues with preceding editions, I had an even more challenging time keeping with Burton.

I like Haddawy’s version a lot. But he chooses an earlier cutoff point as to which tales are legitimate. I like Zipes, who includes more tales, but he, too, doesn’t include them all. These two will give you a brilliant introduction. If you desire more — and there are more — you will have to explore other translations. I have not revisited other texts for other tales after my first exposure to Burton, but more modern and longer editions do exist.

RadiantAbyss, I hadn’t heard of the Japanese edition! I have long been curious about Galland’s, and wish I spoke better French so I could try it.