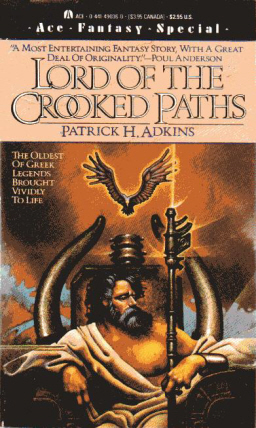 The electronic publishing revolution not only promises convenience, low prices, and the availability of “every book ever published in every language” (in the words of Amazon.com founder Jeff Bezos), but also offers writers like myself the opportunity to undo past missteps in the print-publishing world.

Lord of the Crooked Paths, a fantasy of adventure, love, and intrigue set among the elder gods and goddesses of ancient Greece, certainly had its share of mishaps on its journey from manuscript to paperback to ebook.

The novel began with the intersection of two ideas: Greek mythology and the historical novel. I’ve loved Greek myths since I discovered Edith Hamilton’s Mythology in high school. A college course in Classics deepened that affection, and over the following years I found myself slowly seeking out the original sources in translation. Around the same time, I began reading Alexandre Dumas’ wonderful, action- and suspense-filled historical novels.

What would happen, I wondered, if one applied the techniques of the historical novel to the mythology of ancient Greece? Not retelling familiar hero tales, but fresh, new fictional stories the reader could not already know, set against a background of accurate (“historical”) myth, with fantasy elements treated as fact and the gods themselves as the principal characters?

The obvious place to begin was as near the beginning as possible, during the Age of the Titans, and my prior reading probably represented a generous portion of the required research. In my more grandiose moments, I envisioned a sequence of perhaps ten long novels that would present the entire range of divine myth, from the Titans to the death of Pan in Roman times.

My 600-page manuscript took a year and a half to write. During the nearly three years that followed, I queried some twenty-five publishers (mostly “mainstream”) who were in solid agreement that the story wasn’t for them.

As best I recall, only genre publishers expressed an interest in actually seeing the novel, and each took many months to evaluate it. One publisher required more than a full year.

I quickly decided that publishers’ objections to simultaneous submissions were unreasonable. While publishers read, I continued to send out queries and often had two copies of the manuscript in circulation. I would probably have sent out more had more queries been answered in the affirmative.

This earned me a sharp rebuke from Del Rey Books when I accidentally queried one of their sister companies. As luck would have it, the other copy of the manuscript had just returned, so I could honestly assure them that no other publisher was presently considering the book.

An editor at DAW wrote that he had unsuccessfully defended the book at an editorial meeting where the sales department insisted the story had no central character. (It has a cast of central characters.)

Somewhere during this time, I had the opportunity to talk to Mike Resnick, the canny and highly respected science fiction author and editor. I’ve known Mike since the 1960s, though we’ve probably only met in person three or four times. 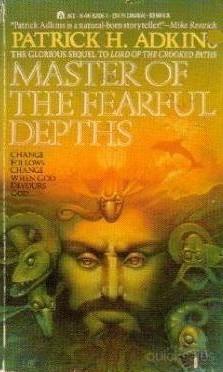 Mike has studied the publishing industry, and when he learned that my novel ran nearly 150,000 words, he cautioned that no science fiction or fantasy publisher was likely to chance publishing a book of that length by an unknown writer. He advised me to try to revise it into two books.

Being stubborn and lazy, I instead changed my query and cover letters to indicate that the story could easily be broken into two books; by this ruse I hoped to coax editors into reading the entire thing. I figured that would be sufficient to make them fall in love with the story and put aside silly objections to its length. The plot was designed to build in intensity through the course of the whole story to a walloping end, an effect that would surely be undermined if it were not presented whole.

Ace Books was the first publisher to receive that revised letter, and their editor called my bluff, asking me to resubmit the first half as a complete book in itself and making it clear that they would likely buy it and the sequel under those circumstances.

I swallowed my reservations and jumped at the opportunity, making the necessary changes to provide an ending for the first volume. Not long after, a contract arrived in the mail.

Now I learned another lesson in publishing: Publishers had schedules and often bought years in advance. Part I, now bearing the title of the original manuscript, sold in late 1985, but would not appear until late 1987. I set to work almost at once revising the second half, which only involved inserting background material to allow a new reader to pick up the story without reading the first book.

Now called Master of the Fearful Depths, Part II would not be published until late 1989. More than eight years elapsed between the time I began writing and when the complete story was available to readers.

Before contracting for Master, I had sought advice on finding an agent; Mike Resnick supplied several names. It turns out to be easy to get an agent when your book already has a buyer. Negotiations for the second sale were handled by one of the very best in the business, and soon both books were also contracted to be reprinted in Great Britain and the first in Japan.

A third book in the series (Sons of the Titans) followed. Although complete in itself, it was designed to introduce characters and set up situations for a fourth volume. I seemed to be off to a strong start.

I was lucky in that both Ace covers were interesting and attractive. The British edition had a lovely, evocative cover, while the Japanese cover featured a striking if overwrought winged Kronos, King of the Titans.

Reviews of the first book were sparse; those of the second virtually nonexistent. Locus, while generally favorable, correctly observed that Lord of the Crooked Paths (Part I) didn’t really work as a novel (and I can hardly argue with that), while a fanzine reviewer accused me of not being Homer.

The Titan books were plagued with publishing mishaps. A “look for the conclusion” notice was accidentally omitted from the Ace edition of Lord of the Crooked Paths, and the two-year gap before the conclusion appeared couldn’t have helped to build readership.

The British publisher had financial troubles and never issued Master. Apparently the Japanese publisher was unaware a sequel existed; the translator appears to have added his own Afterword to explain the eventual fates of my characters from standard mythology, which lay far in the future of the story I was telling.

In those days, accounting took a long time, waiting for far-flung outlets to return unsold items and pay their bills. When I finally received a royalty statement, I was stunned. The initial print run had been smaller than I had expected (based on what I knew of paperbacks in earlier decades), and sales disappointing. Clearly these books had not found their market.

I was reminded of something Mike Resnick had warned me about: Publishers would generally give a writer a three-book run; it took that long to get conclusive sales figures. He mentioned a well known writer whose standard practice was to sell a trilogy to a publisher, then move on to a new one before the dust settled. Even back then, book sales were in decline, exacerbated by steep rises in price.

All of this was before the advent of the Internet we know today. I’ve been amazed over more recent years to occasionally receive email messages from appreciative readers who stumbled upon the books and wrote to ask about sequels. I always tell them I’d love to continue the series if I could find a large enough readership to support it. 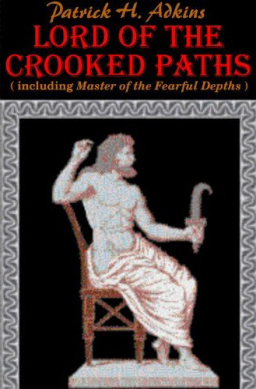 For many years now, I’ve believed that the decision to divide up the story into two separate volumes (the blame for which falls completely on me) diminished the overall impact of the story. Yet it’s difficult to regret my decision, since otherwise the manuscript might very well be languishing in a drawer today.

Electronic publishing, however, has opened up whole new avenues for both readers and writers. At last I’ve been able to restore Lord of the Crooked Paths to something close to its original form.

The digital edition, available in Kindle and epub formats from most ebook retailers, presents the complete story in one package at an affordable price (currently $3.99) — something I’ve long wanted to see.

While reviews of used copies of the individual books sometimes show up on reader websites with three-, four-, and five-star ratings, thus far all of the Amazon Customer Reviews for the complete edition boast five stars. At least some readers seem to agree that the two parts work better together, as a single novel. Electronic publication has given the complete Lord of the Crooked Paths a chance to finally reach readers.

Great article, Patrick. Congratulations on getting your rights back and taking the plunge with ebook self-publishing.

I’m just curious, though, if you’re satisfied with the ebook cover art. This is awfully presumptuous of me, but I took the liberty of making you a new one. Hope you don’t mind. If you decide to use it or have any suggestions, please let me know. http://imgur.com/4VmFg