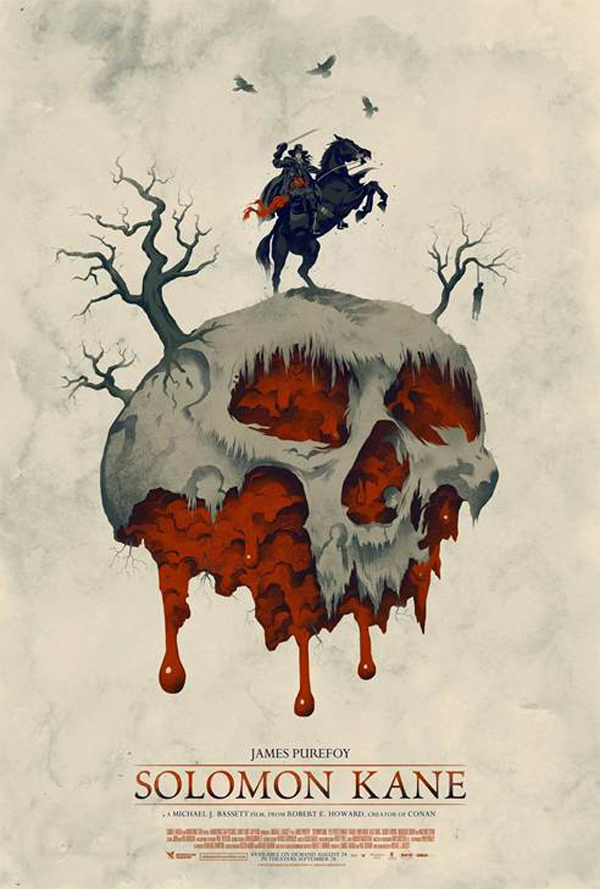 Next month, we colonials will finally have the chance to view Solomon Kane, the film version of Robert E. Howard’s famous puritanical hero, in movie theaters. It has been a long sea voyage over the Atlantic: the movie, directed by Michael J. Bassett and starring James Purefoy in the title role, and co-starring Max von Sydow, Rachel Hurd-Wood, and the late Pete Postelthwaite, was released in England and other territories in 2009, but lacked a U.S. distributor. I almost gave up on the movie getting any kind of theatrical release, and expected it would one day find its way to the straight-to-DVD/Blu-ray market.

However, last week, Michael J. Bassett announced on his blog that the Weinstein Company’s new division, Radius Films, had acquired Solomon Kane and would release it first on premium video-on-demand (already available if you want to spring for it) and then give it a theatrical release on September 28th. So mark the date and sharpen your rapier, people of the New World.

No word yet on how wide a release this will be, but I expect it will be “limited”: select theaters in major US cities. As a Los Angeles resident, I’m confident I’ll have it within easy driving range (I live in one of the most heavily theater-populated places in the city, and I can even guess right now which theater it will show at.)

Bassett’s comments on the release pattern:

I currently have no details on the extent of that theatrical run but I suspect it will be what’s called “key” areas — so probably 15 or so cities in the US. Not world beating and it’s going to need lots of support to find the audience but there’ll be enough interest to hopefully put Kane back on the map and in a place where we can sensibly talk of sequels.

Sequels! Ambitious. Not holding my breath.

Bassett also unveiled the amazing alternate poster for the US release, seen here. I’m in love with it: the pulp adoration dripping like the blood from this illustration is intoxicating. I want it on my wall now.

What about the movie itself? Since it’s been available in many English-speaking territories for three years and to anyone who had a region-free DVD or Blu-ray player, there are already numerous reviews and opinions on the ‘net. Here are two of them. Opinions I’ve heard from those I’ve personally talked to range from “dark and great!” to “Howard and Solomon Kane in name only.” Since I haven’t seen the movie, I have no observations to make at the moment, but those who have please weigh in on the comment thread.

Nonetheless, I will be in the theater on September 28 and will give Black Gate readers my opinion soon after.

Thanks for the update, Ryan! I live in the western suburbs of Chicago, so catching this could be a real possibility.

Nonetheless, a full report would be much appreciated. Just so I know if it’s worth the drive. 🙂

I thought it was a very good movie. I enjoyed James Purefoy’s performance, though I usually do, and it had a great sense of dark atmosphere. The special effects and costuming were good (I very much want his hat!), and the story was predictable, but dotted with good action and melodrama.

The Puritan angle isn’t buried, maybe pushed to the background is a better term. He’s still grim, haunted, and wondering the world; which is the essence of the character for me.

I would love to see this on the big screen (I live in Reno, so I won’t), and I would definitely see a sequel.

That’s a really lovely poster. Unfortunately, the movie is positively LOUSY. Nevermind whether it’s an accurate representation of the character; it’s just a piece of crap film that’s only marginally better than the recent Conan remake.

I saw it at the Toronto International Film Fest a few years back and enjoyed it. Was it Kane? Not until the end, sadly. However, I DID have the chance to talk with Bassett, Purefoy and producer Paul Berrow after the movie and came away with the feeling they would do it ‘right’ now that the obligatory ‘origin story’ was out of the way (the origin story was fostered on them by the ‘suits’, otherwise it would have never been made). For those interested, here’s my review of the movie:

[…] box office returns. He also discusses other REH-related film projects in development, the state of Solomon Kane , comic book adaptations and the […]

Solomon Kane–Coming to a Theater Near You? « Fantasy Matters

[…] learned from Black Gate recently that Solomon Kane will be released in the U.S. next month. Spread the word, dust off your cutlass, blunderbuss, and crucifix, and prepare! Even if it’s […]

[…] for any talented filmmaker. The 2009 British-French-Czech Solomon Kane, which finally received its limited U.S. theatrical release today (also on VOD if you can’t find a local theater), showed many hints of not only getting on third, […]