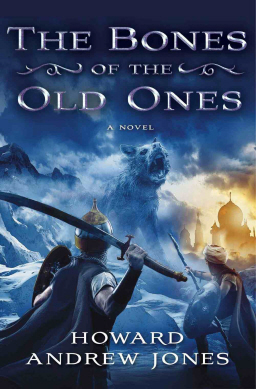 I’m launching a contest to win an advance reader copy (known as an ARC) of the next Dabir and Asim novel, The Bones of the Old Ones. Now Bones won’t actually be available until December 11 of 2012 through bookstores (or via Kindles and Nooks and what have you), but ARCs will start going out to reviewers within the next few months. And one of them could be headed your way.

Here’s the deal. The Dabir and Asim series needs a title. I haven’t yet come up with one that’s especially electrifying, so I’m throwing open the gates, and from now until July 22nd I’m accepting your suggestions for series titles. The series title will appear on the final version of the cover, probably in the place where this version of the cover reads “A Novel,” and on all following Dabir and Asim novels.

Here’s how to enter:

1. E-mail me (with no spaces in the actual e-mail address) at joneshoward AT insightbb.com.

2. Use Dabir and Asim Contest as the subject line.

3. Provide me with the series title you like best, and an e-mail where I can reach you.

4. You can list several ideas in a single entry, or just one. If you’ve already sent me one or more ideas and think of others later, just send me a new entry.

My editor Peter Wolverton and I will sort through all the entries and pick the winner from them. Should we choose a series title some other way, I will still select my favorite entry from this contest, and that person will receive an autographed ARC. On the outside chance that several people suggest the same title that Pete and I end up loving, then we’ll select one of those entries via random draw.

The only other thing you need to know is that I need all entries by Sunday the 22nd of July. I’ll announce the winner by the end of July.

I look forward to your entries!

Oh, and if you’re wondering what the book is about, here’s the official back cover copy:

As a snowfall blankets 8th century Mosul, a Persian noblewoman arrives at the home of the scholar Dabir and his friend the swordsman Captain Asim. Najya has escaped from a dangerous cabal that has ensorcelled her to track down ancient magical tools of tremendous power, the bones of the old ones.

December, I thought it was due for August…Lol. Guess I ll have to read the well of eternity short stories again.

I hope the new Morlock novel is still scheduled for August

Thanks for your interest!

Originally it WAS scheduled for August. The delay was due in no small part to me injuring my knee pretty badly and requiring therapy to strengthen for surgery, then the surgery, then therapy to recover from the surgery… It all went down while I was supposed to be working over the final draft, and by the time I was consistently coherent, there wasn’t time to get it out by August. The next good open slot wasn’t until December.

So far as I know, Morlock is undelayed. I need to drop James a line and see how he is doing.

No worries! I hope your knee feels better. Bones of the old ones will make a good Christmas present to myself.