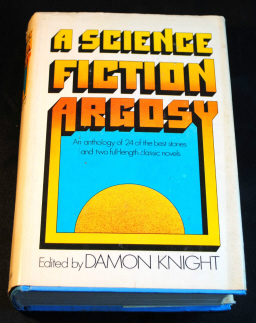 Damon Knight’s massive anthology A Science Fiction Argosy was published in 1972, when I was eight years old. It’s over 800 pages, packed with 24 novellas and short stories plus two complete novels, Theodore Sturgeon’s More Than Human and The Demolished Man by Alfred Bester. It’s one of those big, heavy books I’d often glance at on my bookshelf, thinking “I should really read that. As soon as I finish this game of Solitaire.”

I know Damon Knight mostly as an editor — of the highly acclaimed Orbit series, and dozens of other SF anthologies — but he was also a novelist and short story writer. Late in his career he wrote some exceedingly weird SF novels. Check out the article I published at SF Site in 1997, Jim Seidman’s review of his last novel Humpty Dumpty: An Oval, which centers on a lingerie salesman whose skull is fractured by a stray bullet, and who abruptly finds himself dodging both deadly meteorite storms and the society of dentists that secretly rules the world. Glad Jim read it, as I’m sure he made more sense out of it than I would have.

Damon Knight was also a highly respected critic, famous for his dislike of popular pulp writer A. E. van Vogt (“A pygmy who has learned to operate an overgrown typewriter”), for founding the Science Fiction and Fantasy Writers of America, and co-founding both the Milford Writer’s Workshop and the Clarion Writers Workshop. He was a busy guy.

I finally started reading A Science Fiction Argosy this morning (after blowing nearly four decades of dust off it). And you know what? It’s pretty good. I was particularly charmed by Knight’s introduction, which can be nicely encapsulated with its first and last sentences:

Some few years ago, when I was only teen-aged science fiction addict in Hood River, Oregon, I prowled the stacks of the local library… like a pornographer looking for pornography, I ferreted out science fiction… but I never got enough…

This is the kind of big meaty selection I wish someone had given me when I was a teen-aged science fiction addict in Hood River, Oregon.

That may be the most honest intro I’ve ever read, and it explains a good deal about what Knight was trying to accomplish with A Science Fiction Argosy — and indeed, perhaps, his entire life as a critic and highly vocal advocate for science fiction. The first story, John Collier’s “Green Thoughts,” is from 1931, but the anthology quickly leaps forward (skipping nearly the entire pulp era) to 1949 for the second, Isaac Asimov’s talky SF puzzler, “The Red Queen’s Race.” Henry Kuttner and C.L. Moore’s “The Cure” is even better, a dark and twisted fantasy of a New York lawyer trying to understand an oddly recurring hallucination of suffocation.

That puts me barely 50 pages in. I’m tempted to stop here and write a review, but Knight the critic would not be impressed. So I’ll reserve final judgment until I turn a lot more pages. In the meantime, consider this un-critical word of advice: find your own copy, and don’t wait as long as I did to crack it open.

I once thought of Damon Knight as a critic and anthologist who wrote a clever story, To Serve Man, which became an unforgettable episode of The Twilight Zone.

Then, some years back, I read the anthology, Bug-Eyed Monsters, edited by Bill Pronzini and Barry Malzberg, which leads off with Knight’s story Stranger Station.
This story knocked me out of my chair.

It is not a clever punch-line kind of tale, it’s a bravura piece of serious space operatic sf with strong characters, a vivid setting, genuinely alien horror, and a plot that manages to make the outcome of a single character’s dire situation a crux of cosmic importance without pushing the whole tale into wide-eyed melodrama.

The other stories in the collection were worth reading, but Knight’s tale put them deep in the shade.
Ever since I read Stranger Station I’ve intended to read more Damon Knight. Alas, I have not.

A fine endorsement! I have a copy of BUG-EYED MONSTERS upstairs, and I’ll crack it open this weekend. Thanks for the head’s up.

Why? Why am I not surprised that you have a copy of this trade paperback anthology from 1979 “upstairs”?

Upstairs is where I keep all my vintage paperbacks (by definition, everything printed before I started collecting science fiction in 1976). I’m missing a few titles, but by and large I have most of them.

Downstairs is the library, where you can enjoy books without having to take them out of a plastic bag and struggle with tape first.

The basement is the Cave of Wonders, where about 80% of the collection is stored, and where you can enjoy books if you don’t mind crawling around with a flashlight in the crawlspace to find what you want.

[…] week I posted a brief article on Damon Knight’s landmark SF anthology, A Science Fiction Argosy (and I mean that in the […]

As promised, I settled into my chair with BUG EYED MONSTERS over the weekend, and read several stories. I wasn’t as taken with “Stranger Station” as you were — a bit too much 1950s-era “Man is divinely destined to conquer space” for me.

Although I admit the horrible ending that directly arises out of this attitude might have been part of the point. Worth discussing, anyway.

I said a bit more in yesterday’s post here:

Plus, besides the names I obviously know–Asimov, and Kuttner and Moore, for example in the stories I’ve read so far–there are quite a few names in the TOC that I don’t recognize. In the stories I’ve read so far, that would mean John Collier and John Wyndham. The Collier story was good, but Wyndham’s is amazing. I see at Amazon that I at least recognize the titles of some of his novels; now off to spend more money buying up his books. 😉 (And that’s always the danger for me when I read these anthologies, or year’s best collections, or ….)

I know exactly what you mean! I have a small handful of anthologies in my youth (The Hugo Winners, Before the Golden Age, The SF Hall of Fame) to blame for a lifetime of SF and fantasy collecting.

If ever there was the equivalent of a literary gateway drug, it’s a good science fiction anthology.