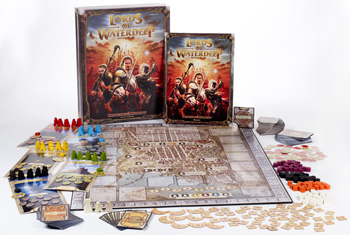 Lords of Waterdeep is a board game based around the intrigues of Waterdeep, the political hub of the Forgotten Realms. Instead of playing Adventurers caught up in these intrigues, you are one of the Lords of Waterdeep, gathering adventurers to your cause and sending them out on quests to advance your agenda. The game lasts 8 rounds and, at the end, the player who has amassed the most Victory Points (VPs) wins.

Based on the number of players, you get a set number of “Agents” who are working for you. In each round, you take turns in order as long as players continue to have unused Agents left. On each turn, you place one of the Agents in one of the various buildings on the board. In addition to static building locations, you can purchase buildings throughout game play. Each building has a unique power, so the specific layout of the board and game options is different each time you play.

The powers of the buildings mostly focus on a handful of things:

I’m sure this list isn’t exhaustive, but it gives the broad outline of options. The Intrigue cards either give you a benefit, hinder an opponent, or both.

The main mechanic for gaining VPs is by completing Quests. Quests require a specific combination of Adventurers, sometimes with gold costs as well. There are four types of Adventurers: Fighters, Wizards, Rogues, and Clerics. These Adventurers are represented by different-colored wooden cubes. (This, presumably, is how they were able to keep the cost of this game below 50 bucks.)

The strategy my wife discussed comes into play because you have to plan ahead to figure out the best way to gather Adventurers to complete quests. The way the static game board buildings are set up, Rogues and Fighters are about twice as abundant as Wizards and Clerics, for example, but if you’re getting added bonuses for completing Piety Quests, you’ve got to try to outmaneuver your opponents to get as many Clerics as you can if you want to have a chance of winning.

Another strategy example: I had one Plot Quest card (a Quest that provides a continuing game effect when completed) which allowed me to pick an Adventurer of any type I wanted at the beginning of each round. If I could have figured out a way to complete this Quest early in the game, it would have provided a huge benefit over several rounds. Instead, when I reached round 6 and hadn’t yet completed it, I realized that I should give up on it in favor of completing others Quests that had higher VP rewards.

The game has several elements in common with the previously-reviewed game Small World, not least of which is the abundance of pieces (and the cool storage tray). Here’s the full component list, so you can see what you get:

My one complaint about the game comes in a lack of clarity in some of the rules. Some aspects of the sequence of play (such as how to determine who gets the First Player marker) are not clear in the full rules, though they are laid out fairly clearly on the “Rules Reference” sheet on the last page of the Rulebook.

The method of tracking VPs, however, is a bit unclear throughout. There are two different mechanics in place for VPs: an outer track where players move their scoring marker and VP tokens. The way the VP tokens are used in the rules, there’s only a need for 24 of them. This leaves 12 VP tokens with no clear purpose. The rules give no real indication of when in the course of the round the movement along the track should be made, so we initially played by handing out VP tokens when VPs were earned … but ran out of them so quickly that we had to begin moving along the track.

Despite this little hiccup, my wife and I both enjoyed the game tremendously.

Wizards of the Coast does have plans for an expansion, as the game board is designed with a position specifically reserved for a sixth faction’s piece. My guess (Note: pure speculation) is that it’ll be some sort of evil-aligned faction. If so, it would be interesting to see a variant of play where the 5 good factions have to coordinate their efforts against a more powerful evil foe.

Regardless of what they come up with, the folks over at Dungeons & Dragons have definitely come up with a quality product in Lords of Waterdeep. After years of being an Adventurer caught in the intrigues of others, it’s nice to assume the role of puppet master.

Disclaimer: A copy of the games was provided by the publisher at no charge for review purposes.

Lords of Waterdeep: A Dungeons & Dragons Board Game Review

I have to say that the board games that Wizards of the Coast have been releasing this past two years have been amazing.

Conquest of Nerath was very good.

I have to agree with Christian — I haven’t been this excited about a series of board games in years.

LORDS OF WATERDEEP is one I’ve especially been looking forward to. Great to see it’s lived up to expectations!

[…] The long-awaited (by me) Lords of Waterdeep has finally landed, and my man Andrew Jones tells me it rocks. Plus, I’m still processing loot from my prolonged auction insanity at last weekend’s […]

[…] years they’ve released a surprising number of innovative and successful titles, including Lords of Waterdeep, The Legend of Drizzt, Castle Ravenloft, and many […]

[…] and announcements from Wizards of the Coast to get excited about in 2012, such as D&D Next, the Lords of Waterdeep board game, and the first four Dungeon Command faction packs (covered here and here). But one game slipped […]

[…] Coast has released some great Dungeons & Dragons brand board games like Conquest of Nerath, Lords of Waterdeep, and Dungeon, as well as their miniature skirmish line Dungeon Command, which ties into their […]