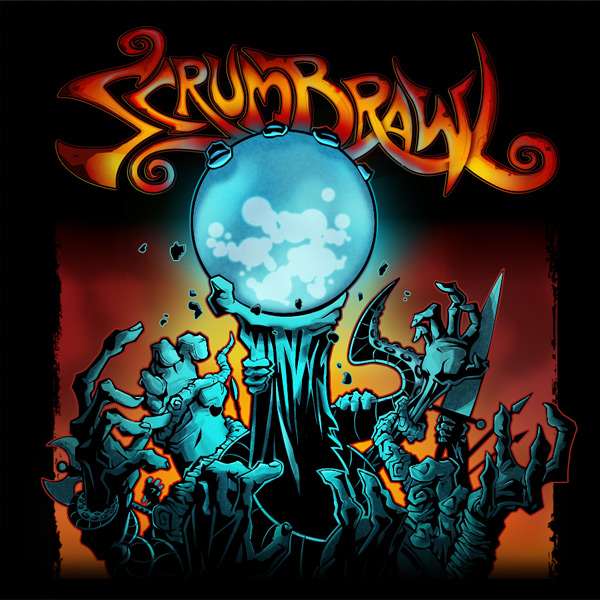 I’ve always been fascinated by the attempts of gaming companies to turn athletic sports into board games. Fascinated, but not quite intrigued enough to play one, until now.

Some of the most notable of these efforts seem to have historically come when a successful wargaming miniature company has reached its apex and is looking for a new product. (More on this below the fold.)

ScrumBrawl is a sports-based game that doesn’t fall into this category, not least because it is the introductory effort by newcomer VicTim Games. Instead of trying to leverage existing products and success, they’re using this game as their springboard into the marketplace and, I must say, it’s a good effort. It also uses cards instead of miniatures, which is part of the reason why the game goes for nearly half the price of some of the more established competitors.

Overall, the game is extremely enjoyable and easy to get into, with a minimal amount of fuss … and cost. If you can get over the lack of miniatures, and are looking for a quality game, this is a product you would do well to look into.

The goal of the game is simple: get an orb into a portal to score points, in the form of blue tokens. You can also score points by killing enemies. Every three opposing players killed earns you a red token. A player wins the game by being the first to get three tokens, but one of these tokens has to be blue, insuring that you cannot win the game just by killing the opponent’s players. You have to get the orb into the portal at least once.

To make thinks interesting, though, the orbs have special powers, some beneficial and some detrimental. The Shield Orb adds to defense, while the Heavy Orb hinders your movement and throwing range. Perhaps the most intriguing is the Killer Orb, which kills the carrier at the end of the turn, but can be used as a thrown weapon to get it out of the carrier’s hand.

Creature placement, orb placement, and portal placement is all done randomly. The board is a 20 x 20 grid, with blue numbers on one side and red numbers on the other, so rolling a red d20 and blue d20 (included with the game) determines a unique position on the board for placement. This creates a fun, chaotic element to the game, because you never know what’s going to come into play where.

The creatures, of course, all have unique special abilities. You do find yourself frequency referencing the rulebook during the first couple of games, until you’ve figured out the ins and outs. The rules are available online, so you can familiarize yourself with them before buying the game!

I’ll admit, when I first opened the game, it seemed a bit overwhelming. The game has something of the feel of Magic: The Gathering, because you’re using cards to summon creatures onto the game board, and there are also Enchantments (some which are cast on specific creatures and some which affect the whole team), Events (including instant events, such as Dispel), and Alter Reality cards (which allow you to modify any roll in the game).

Once you get the hang of it, after a couple of rounds of play, the game flies by, and explaining it to new people becomes relatively easy. The majority of the rules are clearly indicated on the individual cards, and the game comes with cheat sheet-style cards that each player can have on hand for easy reference to the basic rules.

Though VicTim Games is new, you can’t tell it from the game. If someone had told me that this game was made by Wizards of the Coast, I wouldn’t have any reason to disbelieve them. The production value is very high, with good art quality. No complaints at all on that score.

One interesting note is that the game came to me with an extra package of plastic stands, to hold the creatures upright when they’re on the board. The enclosed note indicated that, after the game was produced,they’d realized the original stands weren’t durable enough for use in the game, so they were replacing them in subsequent editions. So, honestly, my major complaint about the game has already been taken care of by the publisher! This is a sign of a company that really stands by their product, so kudos to VicTim for continually looking to make things better.

My hope is that I’ll see Vic and Tim (the founders of VicTim Games) putting forth more products in the future. In the meantime, you can check out an online video demo of the game to see it in action.

A History of Fantasy Sports

And what of those other games, the miniature companies that have tried to transform their product into a sports-based fantasy game (or fantasy-based sports game)?

Games Workshop’s classic effort in this regard was Blood Bowl, which is a violent variation of football featuring elves, dwarves, and orcs. The idea of orcs in football helmets (and elven cheerleaders, or even dwarf cheerleaders, or, sadly, orc cheerleaders) is enough to make this concept sellable! Frightening, perhaps, but sellable.

Blood Bowl is out of production, so getting an actual board and miniatures involves some digging through the internet, auction sites, and other resellers. The rules have been updated and are available online for free download … but, of course, you need to get a copy of the game for that to be any use to you.

This game was big on league play, and there appears to still be an active online community built around play of  the newer video game version (available for Xbox 360, Sony PSP, and with a PC edition currently selling for only $5, possibly as an incentive to upgrade to the new Legendary Edition of the game).

Privateer Press’ game, Grind, is still available. In it, you are a warcaster who plays a bloody battle against the opposing team, using the intermediaries of steampunk-inspired warjacks, giant mechanized constructs that you’re trained to magically control. It’s basically an amended version of Privateer Press’ once-very-popular WarMachine game. (My local game shop no longer even carries WarMachine or the companion game Hordes in stock, whereas just a couple of years ago Privateer’s stuff were some of their best-selling products.)

Milton Bradley has even gotten in on the action, with the futuristic Battleball Game. I don’t know much about this particular game, other than that it exists (and, judging from the Amazon page, is out of production), and it features a version of football where the players are in battle suits.

These sorts of games can give a more enjoyable tactile experience, the feel that you’re moving real creatures across the game board, but in actual game play, it’s hard to believe that any of these would actually be able to outshine ScrumBrawl. It’s a solid game which I think can stand toe-to-toe with these competitors … although they may want to consider adding some orc cheerleaders if they really want to stand out.

I’ve played SCRUMBRAWL a few times with my eldest daughter and once with a friend, and we’ve all enjoyed it. I’d like to get a full 4-person game on some time.

I agree that it’s an awesome quality product put together with a lot of genuine care by a great team. I look forward to seeing/playing whatever they come out with next.