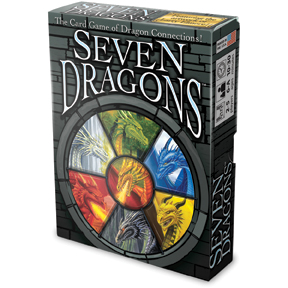 Two of my favorite card games come from Looney Labs: Fluxx and Chrononauts.  One of the major selling points of these games, for me, is that they’re creative games that have victory conditions that can change on a dime. You can be close to winning and then, with a lucky and well-played turn by an opponent, you can find yourself on the losing end.

Seven Dragons captures this chaotic feel, mixing it with some great fantasy artwork by Larry Elmore. The name comes from two different aspects of the game:

When I say “create a chain,” I mean by connecting cards together, sort of like playing dominoes. The majority of the cards in the deck are dragon cards, which feature from 1 to 4 dragons of various colors on them. You can place a new card onto the board by having any one dragon on the card adjacent to one of the already-present colors. So, for example, in the graphic below you’ll see a chain of three green dragons down at the bottom. The green dragon at the top, however, is not part of this chain.

The Silver dragon (there’s just one) is the starting card on the board. It starts out as any color, but changes colors throughout the game. The Rainbow dragon, on the other hand, is a wild card, and represents all colors at the same time. 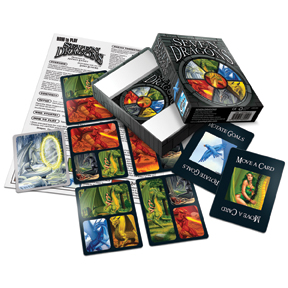 There are 5 goal cards, which tell each player which color of dragon they’re trying to get a chain of to win. In typical Looney Labs fashion, though, this goal isn’t static. Various Action Cards allow the goals to swap between players, so that your efforts can be thwarted at the last moment (and there’s nothing you can do about it). The following action cards (3 of each) are in the game:

The best thing about this game, for me, is that I can play it with my 6-year old son. There are some rule variations in the box for young children, and so I decided to go with the “Single-Action” variation for our game. We removed all of the actions but Zap a Card, so that I only had to explain (and he only had to keep track of) one variable during the game. (There are other rule variants intended for even younger children.)

Most games that I like are fairly complex (for example, Fluxx and Chrononauts), so he’s at a serious disadvantage when playing against me. This, however, involves seeing openings and creating patterns, something which doesn’t necessarily come more readily with age, so it’s a game where he has a fair shake of winning without me having to throw the game.

The game is also great for adults, and especially this is a game which can be introduced to non-gamers fairly quickly. My wife is always hesitant to allow me to pick out games to play with her friends, ever since something that I like to call “the Risk: Godstorm incident,” but Seven Dragons seems to be fair game.

My wife and I both think that the game will work better with more players although, to date, I’ve only played 2-player games. One of the problems with the 2-player version of the game is that it becomes obvious fairly quickly which chain each player is trying to make, so some of the mystery is lost. With more players, a single use of Trade Goals or Rotate Goals won’t give away everyone’s goals to all of the players, which will require more strategy.

One of the game’s drawbacks (albeit a minor one) that I see is the lack of variety in the graphics. They’ve done a good job of taking 7 pictures and using them – cropped in various ways – to keep each picture from looking identical, but it would have been nice to have had a variety of geniuinely different images for each dragon. Granted, they did get these images from one of the top artists in the field, so this is perhaps unrealistic, but I did find the art to get a bit monotonous after a few hands. Still, when one of the biggest complaints about the game is that you want to see more artwork, that’s a fairly good problem to have.

Overall, Seven Dragons is a fun, quick game, which players of all ages and backgrounds can enjoy. It’s definitely a great weapon for any gamer’s arsenal in the ever-lasting war against boredom (and lameness).

Disclaimer: We were provided a free copy of this game for review purposes.

I love so many of the Looney Labs games. Fluxx is a particular favorite of mine, though it’s too text-dense for play with young children or dyslexics. (Dyslexics can play it, but it’s not as much fun for them.) Icehouse has some variations that are simple, elegant, and probably timeless, and other variations that are exuberantly silly. The original Icehouse variation is probably one you could play with a six-year-old. It’s more like chess than like capital-G Gaming, though.