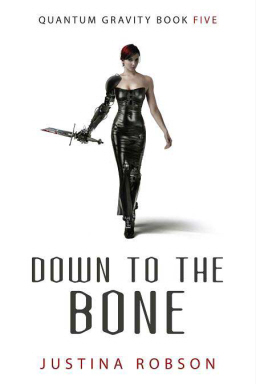 Down to the Bone by Justina Robson (Pyr, 2011) is book five of the Quantum Gravity series, so it must represent some sort of success. The first blurb on the back cover tells all, or maybe more than all:

“This isn’t SF for SF readers. This is SF for a generation raised on anime, manga, and MMORPGs.” — Ain’t It Cool News.

Presumably MMORPGs are some sort of role-playing game.

But seriously, have you ever seen a blurb which so explicitly told a large section of the potential buying public to go get stuffed? This (not to judge the actual book, which I have not read) is clearly marketed as post-literate SF for people who do not much read books.

I have never seen a blurb before which so firmly told me, “No, do not buy this one. You won’t like it.” Maybe I should appreciate the publisher’s honesty.

Is this suicide or a canny marketing strategy? Is the author cringing, or laughing all the way to the bank?

I don’t doubt that Justina Robson books sell admirably. There’s a kick-ass heroine with a pointy thing on the cover. It’s part of a generic series. Just what the market wants. It is very likely that the post-literate audience is in the majority now, and will rule mainstream publishing.

What I am remarking on is how explicitly the blurb tells me (and, I suspect, most long-term genre readers) to go away. Most blurb copy attempts to convince everyone that this is a great book they must have. This one comes right out and says that it is not SF for people who read SF or who are part of any literary culture.

Darrell Schweitzer’s last article for us was Selling SF & Fantasy: 1969 Was Another World.

The slap is an odd choice. As a woman, I’ve seen a lot of book covers and blurbs that signaled to me that I was an unwelcome reader because of my gender, but it is rare to see a blurb that proclaims, Chicks will not dig this.

There were many years when kick-ass heroines were so rare that I couldn’t afford to be picky. I used to say I’d watch any film in which the women had weapons. Those days are over now, for good and ill. I like anime well enough, but when I want anime, I can watch anime. I love a novel that gives me what only novels can give me. Why pick up a book that promises not to deliver any of that?

Excluding large segments of the audience seems to be popular in the media now, for some reason. Look at those new ads for Dr. Pepper 10 or whatever it’s called – “IT’S NOT FOR WOMEN!” Who thought that was a good idea?