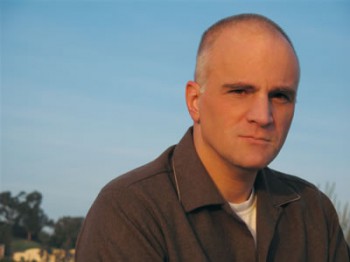 Nathan Long is a novelist best known for his work in the Warhammer universe, most notably for his Black Hearts series and Ulrika the Vampire series, as well as penning the new adventures of the classic Warhammer duo, Gotrek & Felix. Recently, Nathan’s Jane Carver of Waar has been released to some great reviews, and is getting a lot of attention in light of the recent big budget movie adaptation of the Burroughs novel that inspired it.

Welcome, Nathan, and thanks for sitting down with Black Gate to talk about your latest novel.

My pleasure. Thanks for having me.

Jane Carver of Waar is a Barsoomesque adventure for the modern reader, and something that treads the line between loving homage and knowing send-up of classic pulp SF. Tell us a bit about the book, and do you think readers need to be familiar with Edgar Rice Burroughs, Barsoom, and other stories of that era to fully appreciate Jane Carver?

Jane Carver of Waar is what I used to call, before I knew any better, a “Sword and Raygun” adventure. Now I know I’m supposed to call it a Planetary Romance, but I still like mine better. It tells the story of Jane Carver, a hard-riding biker chick who gets herself on the wrong side of the law and ends up hiding in a cave that transports her to a world full of strange aliens with stranger customs. There she has a sequence of wild adventures while trying to help a not-very-heroic young alien noble rescue his kidnapped bride.

I really hope readers won’t need to be familiar with the Planetary Romance genre to enjoy the book. I did my best to make sure they wouldn’t, as that is one of my pet peeves. I dislike parodies and homages that require some knowledge of the thing being parodied. It is my belief that a book should stand on its own, even when commenting on another book or genre. A book should be a book first, thoroughly enjoyable by itself, and anything else the author wants to make it second. 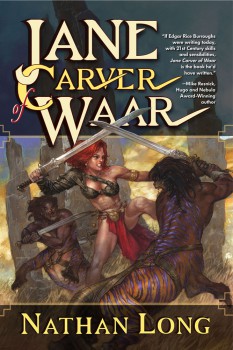 I also hate overloading books with in-jokes and nods to those in the know. These always pull me out of the story and break the illusion of reality that is so important to fantasy fiction. I tried very hard to restrain myself from putting any of these in, and other than Jane’s name, you won’t find many direct references to any other specific book. In fact, when I wrote it, I deliberately did not go back and read any of the original Barsoom books. I wanted Jane to be based on my feelings for and memories of them, rather than any kind of one-for-one retelling.

When was your first encounter with this kind of adventure SF? Would you count Burroughs as an early influence?

Hmmm. I think I discovered the John Carter books when I was thirteen or fourteen, and I’ll be honest, I probably wouldn’t have picked them up except for the Frazetta covers on those old Science Fiction Book Club hardbacks. In fact, I’ll go further than that, and say that those covers were more of an influence on me and Jane than the words inside them were.

It’s not that I didn’t like the stories. I did. They had great pace and terrific invention, but even when I was thirteen I thought John Carter was a bit of a stiff, and I knew that the plots were simplistic. I’d already read The Lord of the Rings and Fritz Leiber’s Fafhrd and the Gray Mouser books by that point, so I was acquainted with top notch plotting and characterization. I read the Barsoom books for the spectacle, and Frazetta’s paintings and ink drawings completely colored my imagining of that spectacle. I saw ERB’s Mars through the beer goggles of Frazetta’s vision of it.

Is it true that this book was actually your first novel and is only just now seeing publication?

Yup, I wrote Jane Carver ten years ago, and after getting no response from the various publishers I sent it to back then, I left it on the shelf and moved on to other things. The only reason it sold now was because I was digging though my old stuff trying to figure out which things I could dust off and e-publish, and I sent Jane to Howard Jones, asking him if he thought it was good enough to unleash upon the world. He told me he loved it, and that I should try one more time to sell it to a traditional publisher. Subsequently, he introduced me to his agent, Bob Mecoy and Bob sold it to Night Shade. It all happened very fast. I’m still kind of in a daze about it.

How much rewriting of the book did you do before you decided to publish? Learn anything about the earlier you in the process?

I learned that I was more linguistically inventive back then than I am now. Although I have truly enjoyed writing tie-in fiction for Warhammer, six years of writing to deadline and having to always make sure my language was understandable to a young audience has made my vocabulary more utilitarian, and now that I’m working on a sequel to Jane, I’ve really had to rev myself up again to reach the heights of verbal virtuosity that I had back when I wrote the first one.

As far as rewriting went, I actually didn’t do much. I went through and cleaned up the draft as best I could, and spent some time updating cultural references. “She was no Cindy Crawford” became, “She was no Scarlett Johansson” etc. But that was pretty much all I did. 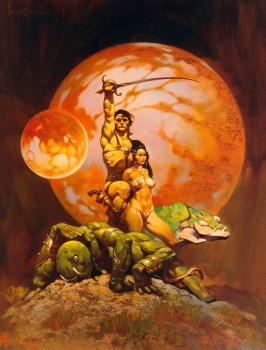 Recently you were part of the massive, multi-blog Crossing the Streams contest along with many other writers of fantasy and adventure fiction. Your own particular focus for the contest was to ask readers about their favorite genre heroines, and many of the responses can be read at your blog, Sabrepunk. How did you approach Jane Carver as a heroine, and what’s your overall take on the tradition of female protagonists in fantasy and science fiction?

I don’t think I made a conscious decision to make Jane one way or the other. She just sort of sprang fully formed into my head and all I had to do was shape the story around her. But looking back on it now, I would say she was definitely a reaction to some of the stereotypical fantasy heroine archetypes – none of which are necessarily bad, by the way, but which sometimes feel overused. So, I didn’t want to make her the weak innocent who must grow strong to overcome adversity. Nor did I want to make her the ice-cold killer who has abandoned emotion and femininity in order to seek vengeance. Nor did I want her to be the spunky young heroine who faces down horrors with a wink and a quip and never seems to acknowledge the danger around her.

Instead, Jane is a kind of woman I’ve often met in real life, but rarely in books — a woman who lost her innocence long ago — and good riddance — who is physical for the sake of physicality, and who doesn’t need a personal tragedy to push her into adventure. She is a woman who is a victim only of her own appetites, and is also strong and capable enough to get out of any scrapes those appetites get her into. Who are the Janes of this world? I’m sure you’ve met them — the bartenders, the ambulance drivers, the surfers, the marines, the backpackers, the triatheletes, the farmers, the airline pilots, the dancers, the rock climbers, and many more besides. Now, ask yourself how many times you’ve seen any of those women as the main character of an adventure book?

That’s why I wrote Jane.

Burroughs spun off a tremendous number of sequels to A Princess of Mars, writing eleven Barsoom novels in total (and numerous other fantasy SF novels and series following a similar formula). Any thoughts on sequels to Jane Carter?

As I mentioned above, there’s already one in the works. I am currently writing Swords of Waar, which picks up almost immediately after Jane Carver ends, and I have ideas for at least two more after that – although there is currently no deal with Night Shade for any more after “Swords.” We’ll just have to wait and see.

Be sure to join us next week when we talk to Nathan about his work in the Warhammer world.

Nathan Long is a screen and prose writer, with two movies, one Saturday-morning adventure series, and a handful of live-action and animated TV episodes to his name, as well as ten fantasy novels and several award-winning short stories.

He hails from Pennsylvania, where he grew up, went to school, and played in various punk and rock-a-billy bands, before following his writing dreams to Hollywood – where he now writes novels full time – and still occasionally plays in bands.

His latest novel is Jane Carver of Waar,  now available from Night Shade Books. Visit his blog at www.sabrepunk.com.

[…] Last week we talked about your latest novel, Jane Carver of Waar. But most readers are more familiar with the work you’ve done in the Warhammer world, where you’ve published 11 novels to date. How familiar were you with Warhammer and Games Workshop before you began writing for them? […]