It was a long and arduous journey from New York City to San Diego last Thursday. Oh, the delays! Oh, the taxiing! Oh, the stand-bys!

However, two things made the journey incredibly pleasant. One was my traveling companions, Ellen Kushner and Delia Sherman, who both travel so often that they have it down to an art form.

When I told her I liked to arrive at the airport two hours early, Ellen replied:

“I’m more like Peter Sellars, who said he likes airplanes to be like taxicabs:  He gets to the airport, gets on one, and it leaves.”

Daunting! But, see, it worked! 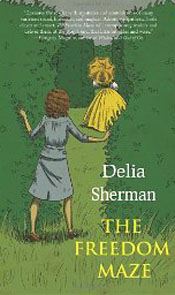 The second thing was the book I read on the airplane. It was Delia’s book, actually released during the convention. It’s a Young Adult time-travel fantasy called The Freedom Maze. I sank into its story as doth the unwary sheep in the treacherous highland bog, and emerged from the last page as we were landing in Texas. Where, due to earlier delays in New York, we’d missed our connection flight.

But have no fear, gentle readers! Even though I was certain I’d never make it to World Fantasy in time for my VERY FIRST EVER WORLD FANTASY READING, the Gods of the Air (and my two traveling companions, AKA fairy godmothers) were with me. Lo was I shunted onto the next flight, the Last of the Stand-By passengers, while Ellen and Delia waved goodbye and sent me texts saying:

“We are eating BBQ and feeling no pain.”

They were booked on the next flight out. I was on my way. I fell promptly asleep.

The good stuff doesn’t end there, but only begins. Not only had my baggage arrived before me, but Kate Baker (“Narrator, Writer, Singer, Gamer, Geek,” as her website proclaims) recognized me in baggage claim and called my name.

We’d met, it turned out, at ReaderCon. I blinked blearily at her and blathered something indubitably unintelligible. She laughed at me in the most compassionate possible manner and offered to share her cab.

I have always depended on the kindness of fantasy writers.

I just had time to change clothes in our hotel room (there was a Girl in Blue portrait on the wall. My four roommates were convinced that this portrait was possessed by Fell Powers, and to that end had covered it with a scarf) and was whisked off to my reading through the labyrinthine mazes of Town and Country.

As bewildering as the layout of the hotel was (and remained) to me, with its convolutions and prehistoric flora and abundance of roses, I had friends who faced even greater challenges, as it was not Disability Accessible. I hope this is addressed in the future by the Concom. 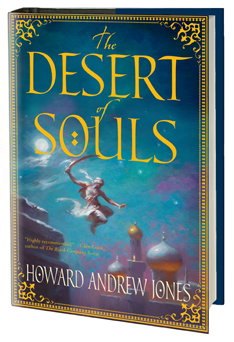 I rendered “Bluebeard’s Tale” from my poetry collection How to Flirt in Faerieland and Other Wild Rhymes, upcoming with Papaveria Press in April 2012. I used my Fake Hollywood Pirate Voice. The shift from verse to prose felt clunky to me but I read an excerpt from Jack o’ the Hills anyway, and it was not all bad.  And some guy I didn’t know came up to me after and had me sign his copy of Rich Horton’s Year’s Best Science Fiction and Fantasy, which just TICKLED me.

Then a group of us ran to Tina Connolly’s hotel room for our “Fantastical Traveling Cabaret of Short Genre Plays,” an informal room-reading that Tina and I had been planning these many weeks. Steampunk superheroines, splatterpunk monster-fighting girls, apocalyptic chatroom drama (Tina calls it “time travel chat forum-punk”), and Muppet Liberation propaganda abounded.  It was Big Fun.

(Tina’s great. Do you know her? This is Tina. Yes, yes. Now that you’ve clicked through to her website, you all want to read Ironskin. A steampunk Jane Eyre with fairies??? I mean, WHAT MORE COULD A GIRL WANT IN A BOOK??? But if I have to wait for it, so do you. So there. Why isn’t it Fall 2012 yet?)

In the meantime, somewhere in the hallways, I encountered our wonderful Howard Andrew Jones. (EVERYBODY knows HOWARD! He’s famous! He wrote Desert of Souls! He has been teasing us with the latest news of poor Asim, our favorite lunkhead, and how he’s being put through the WRINGER in the new sequel. Howard will not let us read any of it. We are, as a result, suddenly using first person plural as though we had “Regina” scrawled after our name.).

I also met Black Gate’s Art Evolution blogger Scott Taylor for the first time, and Dave Thompson (of Podcastle), with whom I’d been corresponding for a few months, and also Terri-Lynne DeFino, a writer friend whom I know through LiveJournal but had not yet met in the flesh. (I read her fantasy novel, Finder, on the way back to Chicago from San Diego. More on that later. But good stuff!)

And what did Terri-Lynne do when she saw me?

She gave me a pair of ruby slippers.

I’ve only wanted ruby slippers since I was, like, four.

And she gave them to me.

I think, eventually, we went back to our hotel room asleep. I can’t remember exactly when.

Great article, Claire! Sounds like everybody had a blast. I heard your reading went over well. So many Facebook Friends in attendance — I wish I could have made it. But I’ll be sure to be at the next Windy City Pulp and Paper Con (maybe with a vendor’s table selling my book?), and I hope to make it to WorldCon 70 next August!!!!

I think you’ll kick butt at your cons. I’ve not been to the Pulp and Paper Con, OR a World Con… So you’ll have to be sure to blog about it!!!

Another fine con report, Cooney. I had no idea you were GIFTED the pair of ruby slippers… I simply assumed they were an eternal part of your wardrobe, like petticoats.

And you were far too modest about the effectiveness of your (first) reading. It was EPIC.

Mmn. I think I will perhaps save words like “Epic” for later, for Saturday night, perhaps, and the reading of The Sea King’s Second Bride. I was not… awake… enough on Thursday to be TRULY epic.

And clunky is as clunky feels! I FELT CLUNKY! Usually I have more of a sense of my audience than I did. Usually I can feel their bodies singing back. But my dear Jack is not to everybody’s taste! Heh heh heh.

You know what’s not clunky? MY RUBY SLIPPERS!

They have been an eternal part of my INTERNAL wardrobe. Terri-Lynne went POOF with her magic wand and made them MANIFEST.

The petticoat of crinoline I got at a thrift store. Or possibly that vintage place. Isn’t it the BEST? It goes with everything! Jeans! Pajamas! Firebird skirts! It is my favorite piece of clothing.

It was so great to finally meet you in person, Claire! And those slippers are MAGIC.

Dave! I wish we could have had more HANG OUT time! You know what else was magic, sartorially speaking? YOUR AWESOME SUPERHERO T-SHIRTS!!! So cool. I wish you and me and the Bogwitch could’ve had lunch. Ah, well. MAYBE IN TORONTO!

[…] of us C.S.E. Cooney has posted a stellar account of the going ons of the weekend at the Black Gate blog that she maintains.  (C.S.E. Cooney is a great writer who I met at Wiscon last year, when we did a […]