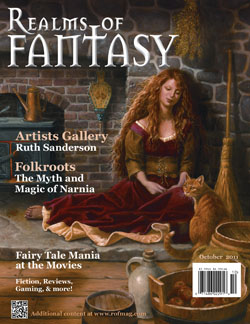 For the third time in less than three years, Realms of Fantasy magazine has closed its doors. This time however, it doesn’t appear likely the venerable fantasy print zine will rise again.

Realms of Fantasy was launched in October 1994 by Sovereign Media, as a sister magazine to Science Fiction Age (published 1992 – 2000).  Sovereign Media canceled Realms with the April 2009 issue, blaming “plummeting newsstand sales, the problem currently faced by all of the fiction magazines.”

The magazine was purchased by Warren Lapine’s Tir Na Nog Press and reappeared in July 2009, skipping only one issue (May 2009). A year later Lapine announced the magazine would be shut down after the October 2009 issue, but Realms was spared again when small press publisher Damnation Books acquired it and resumed publication with the December 2010 issue.

Today Damnation Books publisher William Gilchrist made this announcement on the Realms of Fantasy website:

When we purchased Realms of Fantasy last year we truly thought that we could suceed in publishing the magazine for the foreseeable future. We were unable to realize this goal, have been loosing (sic) money, and we must regetfully announce the closure of the magazine.

During our time with the magazine we picked up without missing a single issue and were lucky enough to produce the 100th issue. We were able to introduce poetry and bring back the tabletop gaming column. We have been truly amazed at the positive feedback on the issues we have produced from all of the fans. This is what makes this decision so painful for us.

If there is anyone interested in purchasing the magazine we will listen to all offers. Those intersted should send an email to support@rofmag.com.

Shawna McCarthy, who was the Editorial Guest of Honor at last weekend’s World Fantasy Convention, has been the magazine’s Fiction Editor since its first issue. Editor Douglas Cohen had this to say in his farewell message:

We reached issue 100, and with this latest issue we’ve managed to publish 600 stories in RoF’s lifetime… There’s a lot to be proud of in this final year, and I’m glad we and the magazine managed to have it. It makes for a fitting end. It’s time to move on, and I’m excited at what the future holds for me in this field.

Farewell Realms of Fantasy. You will be missed.

I know the print market for magazines is falling, but other genre magazines (not even including Black Gate) are holding on.

What is it about RoF that’s not working despite the constant interest by different parties to keep it alive?

I remember when the very first issue of RoF came out. That was the year I graduated from high school. I picked up that first issue from the magazine section of a book store, probably a Waldenbooks. It was a revelation and an inspiration. Here was something for me, a magazine for my tastes. It fueled me even more to pursue my own dreams of writing fiction. I collected it for a few years, though sadly I don’t know exactly where those old issues may be now.

Now, the bookstores are closing up and so are the magazines. I wrote some stories over the years, but I make my living writing marketing and PR content. I was heartened over the last few years when RoF avoided the ax, even though I no longer collected it. It’s a sad moment…

The difference between Black Gate and Realms of Fantasy is that Black Gate offers something different from what you see on the shelves of B&N. I look at Realms of Fantasy and see ‘chic-lit’ fantasy in big, neon lights. The magazine had zero appeal to me – and apparently most people.

[…] all the recent bad news surrounding print fantasy magazines, it’s good to pause to reflect on the blessings we have. […]

Certainly I do get a ‘soft’ or ‘lite’ fantasy vibe from the magazine. Everyone’s mileage will vary for that specific style.

I’m wondering where the disconnect is between what is supposedly a good magazine and the constant struggle to stay published. Does the problem lie with the lack of a buying readership capable of supporting its cost of production?

If it’s a “good” magazine, what is preventing it from successfully salvation.

If it’s a “weak” magazine, why is it remembered fondly enough for various publishers (supposedly spending substantial sums) to try to save it.

Is there an emotional, nostalgic component to these rescues because RoF is one of the last genre print magazines out there?

Is it even feasible to save the magazine? Is it geared towards a viable market? Are its operations and business plan based on archaic models that have long passed their relevance?

Does the magazine deserve to be saved?

I think you really hit on it with your second paragraph. There is a lack of readership to support the magazine.

Don’t forget the RoF had far more overhead than Black Gate, including multiple paid staff (none of the staff of Black Gate are paid, including me). It had a far more regular schedule, and that means it’s more vulnerable to reduced cash flow. When our cash flow takes a hit, we simply postpone publishing for a few months until we can afford to. RoF never did that.