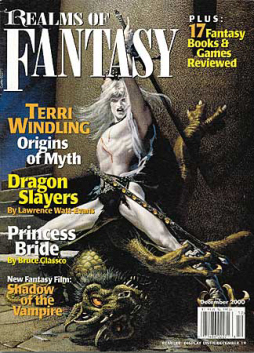 Less than three weeks ago we reported that Realms of Fantasy magazine was being closed by Tir Na Nog Press and publisher Warren Lapine. (And Brian Murphy asked if the end of Realms of Fantasy begs the question: Too much fantasy on the market?)

At the time, Warren offered to sell the magazine for $1 to a responsible party who could continue publication. Now SF Scope is reporting that the magazine has been sold to Damnation Books.

Who the heck is Damnation Books? I admit I never heard of them either. According to their website, they’ve published electronic novels, novellas and short stories by Joshua Martyr, S. A. Bolich, Matthew S. Rotundo, and many others. Their CEO is Kim Richards, and their staff includes William Gilchrist, Tim Marquitz, and Lisa J. Jackson.

Damnation Books plans to release the December 2010 issue (previously only available electronically) in print form, and continue virtually immediately with the February 2011 issue, meaning the magazine’s bi-monthly schedule will suffer no gaps.

All subscriptions will be honored, and Damnation has announced plans for an extra-sized June 2011 volume, to coincide with the magazine’s 100th issue. The website remains at www.rofmag.com, and effective immediately the magazine has reopened to submissions.  No official word yet on whether any of the magazine’s current staff will remain.

This is great news for fantasy fans — and kudos to Warren and Damnation Books for orchestrating what looks like a smooth transition.  Here’s hoping Damnation finds the right formula to keep this grand lady of fantasy alive and thriving.

GOOD FOR THEM! I hope it works out wonderfully!

P.S. Who is that hunky albino slaughtering the wolf-dragon thing on the cover of the magazine? It’s not Elric, is it? Just another vampire? Or a moving statue, like those people you see on street corners?

A wiry albino with long hair wielding a black sword?

My money’s on moving statue.

I’m looking forward to seeing where the new publisher takes the magazine.

Not sure who the albino with the black blade is, but the poor beast getting the business is clearly Manbat, from Batman.

Poor guy — always in the wrong place at the wrong time.

I won’t post a real long rant this time. I’ve said plenty and I’m working on my own projects.

But, please, if anyone listens to my advice;

Throw “Political Correctness” in the gutter of lies, false ideals and sickening perversions it sprang from.

Later, when the controllers and money-men bought up the market, this is one man’s opinion, they introduced PC to RUIN it. Women complained about being wenches and dragon bait, they made stories that pandered to women and put down the “Conan” type. Women did not buy these “Rags” (and I do mean the multiple meaning of the word) but it just spat in the face of the men who bought it. Likewise blacks hated being filed teeth cannibals, orientals fanged teeth sinister world conquerors, Jews sinister rat like money grubbers, Gays…well…etc. And the “Publishers” made all sorts of media that catered that pandered and strove not to offend, except to spit in the face of the “White Male” who bought the stuff. None of the interests/ethnic groups they catered to bought even ONE copy, but they kept this spit in the face of the reader up, outright closing down magazines/books/authors who refused to conform. Then after 10-20 years of spitting in the face of their readers they said it wasn’t selling enough and closed it down to a fraction of it’s 70s boom, IMO right on plan.

I predict if the new publisher takes this same formula, they’ll be again closing it down sooner or later.

It’s time for “PC” to end. Whatever use for it is long past and all it’s doing is building up pressure that’ll turn into worse racism/bigotry than existed before. End it now to blow off steam before the boiler explodes.

And I’m not telling the new publisher to “Conform to my wishes”… I’m begging them to be COMPETITION for my own pulp project, I feel that strongly about it.

Good to hear from you again. You and I are pretty much polar opposites on the matter of political correctness, as usual. But I’m glad to see all that passion for the pulps. 🙂

But you really lost me in the middle there. Is your point that women, gays, African Americans, and Asian readers DON’T read fantasy today, and that the right approach is to target a magazine strictly towards white males? Because, as a magazine seller for about a decade, that’s not my experience — at all.

Hey, that’s one of my favorite Elric’s you folks are teasing. 😉

It is inspiring to see one of S&S’s greats on the cover of RoF, even if it is an old issue. Maybe RoF will pick up a few more heroic or S&S tales going forward.

Yes! That is definitely ELRIC on that cover. The illustration is from “The Vanishing Tower.” Not sure who the artist is (Whelan?)…but it’s also one of my favorite Elric paintings. Definitely one of the all-time great Elric images.

As for the latest resurrection of RoF, that’s great news! It does make me wonder: What happened to all the manuscripts “in consideration” when the mag changed over? I had a story in there for six months, passed on from Doug Cohen to Shawna McCarthy, awaiting final approval. I’m wondering if that’s dead in the water, or if Damnation’s new editorial team will be looking at the story.

I politely disagree (on the demographic issue)
As a magazine -reader- for 20+ years I would say that women, blacks, orientals, Jews, gays are NOT consumers of “Fantasy” literature at all. Oh, given the sheer number of people in the world, there certainly are some exceptions versus the rule, but overall they are sub-microscopic with a few exceptions… This is experience, not “Research” by some person who’ll deliberately skew the odds for fear of becoming the next “Bell Curve” career dead end if the “Truth” is not popular. This is experience, from a guy who’s been in a lot of different places around the USA and is a very regular “Haunter” of bookstore/coffeshops.

And, what, do they WRITE more often to you? Women write more, woman good at whining. Frankly, any complaints about Black issues were probably from “White Apologists” after the days of giant “Cannibal African” movie posters ended.

I’m not saying I want the magazine to be “For Nordic supermen only. DNA test required to purchase!” but that the target should be white males and fine if any others come along also, but we won’t slow down for or cater to them. Not per se trying to drive them away, but no “Pandering Cr-p” that is the usual “hate the white male, kiss kiss kiss up to everything else and file off the rough edges to not offend.”

John R Fultz,
It’s definitely Michael Whelan’s artwork. I met him at Boskone last February and purchased an 18×24″ print of that very painting. He’s done lots of great cover art over the years.

My favorite Elric by Whelan is where he’s leaning rather forlornly on Stormbringer:

What a crush I would like to have on him. What poetry I should like to write to his soul-eating sword. Yum.

Someday, I’m going to have to spend a good month on Michael Moorcock. Possibly, I will spend it giggling. It’s hard to say.

I love the one of Elric at the Sinking City!!! Whelan’s dang cool.

Yeah, I wish I could have seen Elric on a few more RoF covers. And that Whelan piece is really terrific — I’m jealous of your poster!

But, as others have pointed out, the classic S&S images on RoF were probably a little misleading, since that’s not what the magazine was really about.

> What happened to all the manuscripts “in consideration” when
> the mag changed over? I had a story in there for six months

My understanding is that the manuscripts under consideration have transitioned with the magazine — though it probably couldn’t hurt to ask! The submission address has changed to:

Yeah, that’s what I thought you meant. And I have to tell you, at least in terms of BLACK GATE, you really couldn’t be more wrong. Frankly, the magazine couldn’t survive without our female readers. Women have been enthusiastic supporters of the magazine since the day we started.

I’m afraid I don’t have hard data on our sales to ethnic and religious minorities (that’s not something we ask on the subscription form), but again, experience tells me that if African Americans, Jews, Muslims, and Asians stopped buying my magazine tomorrow, I’d be out of business.

I’m really not sure where you came by your conviction that white males are the only ones who stood by fantasy, even in the pulp era [or why you don’t consider Jews or gays “white males,” for that matter], but all I can tell you is it’s certainly not the case for this publisher.

Anyway, I didn’t mean to debate this with you. You’ve mentioned your plans for your own magazine a few times, and I’m very curious how those are coming along.

That’s a great one. But my favorite Whelan Elric (and maybe my favorite Elric piece of them all) is the cover he did for STORMBRINGER:

Sweeeet. By the way, RoF did use this one for a cover back in the mid-to-late 90s.

John RF,
I went looking for a link to that one yesterday to post here, and couldn’t find it!

Although I must admit my favorite is the cover to The Sailor on the Seas of Fate:

John O: That’s another great one! Basically, when it comes to Michael Whelan, you just can’t go wrong! He’s one of the all-time greats.

Just a note, I’m complaining about “Special interests” the “Pandering Cr-p” caters to, so I think you were confused/offended by my lumping those together. No need to argue, I’ve made clear where I stand and I’ll do the rest with my mag!

Anyways, I’ve had some setbacks on the magazine due to RL issues, but GOOD setbacks. I could even make a “Print run” now if I wanted! But I’m going to still keep sell/distribute online .pdf for now. First issue free, published quarterly, debut moved to end of this year/early next year. But it’s almost finished now with some graphics still waiting, but it’s my show so I can do what I F*cking please!!!

[…] other magazines are dying (and then, a la Realms of Fantasy, being  resurrected) or publishing irregularly, editor Samuel Montgomery-Blinn is making good on […]