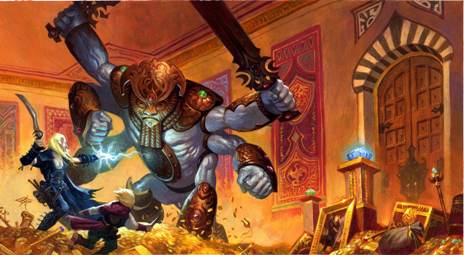 Art Evolution 2011 ends this month with our final artist of the year, but I have to say that once again it was a thrilling ride. Black Gate had the distinct pleasure of featuring the talents of Russ Nicholson, Janet Aulisio , Eva Widermann, and Chuck Lukacs this year and our final entry comes from the epic talents of Steve Prescott.

Now Steve has been doing this a long time, all the way back to the early days of White Wolf when an art director from the company visited his college campus and reviewed portfolios. For my part, I found Steve through Paizo’s Pathfinder. I remember waiting with anticipation for each Pathfinder adventure path to arrive at my home as the company slowly rolled out Rise of the Runelords and Curse of the Crimson Throne.

Both of these six volume series helped set the stage for each of the Pathfinder Iconic characters which were all done by artist Wayne Reynolds. When the company’s 3rd adventure path, A Second Darkness, began I was greeted with a cover credited once again to Wayne, but as I looked over the image I knew another artist had taken over the project with an incredible eye for detail.

Let’s try to put this in perspective, however, because taking over Iconics from Wayne is like replacing Joe Montana at quarterback. Thankfully, like the 49ers of the early 90s, Paizo had their own version of Hall of Fame QB Steve Young with Steve Prescott. 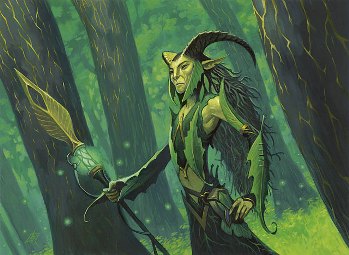 Certainly following a legend isn’t easy, but Steve did so by making memorable characters that expanded the world and never broke the company’s tradition of cover excellence. Still, it’s not like Steve was new to all this when he did so, his work having helped define WotC products in both their 3.5 and 4E lines as well as the venerable Magic the Gathering. He’s also managed his fair share of outstanding and color-challenging pieces for Blizzard Entertainment’s World of Warcraft and these markets helped expand his skill at portraying characters with story.

I have to admit, when I sit down to create a list of possible candidates to join Art Evolution, one thing high on my ‘wants’ is a desire to see Lyssa portrayed by the artist in question. After delving deeper into Steve’s work, I couldn’t help but want to see what kind of treatment he could do for Lyssa because I was so enchanted by the way he created purpose in his images. 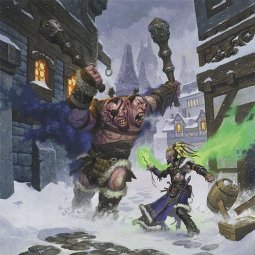 I’d actually tried to make contact with Steve during the initial Art Evolution run, but had never gotten a reply, so I was pleasantly surprised when my attempt this year was answered. Steve, as busy as he is, was gracious and fun in the process and before I knew it he was signed on.

2011 has been a fantastic run for Art Evolution, and as I close down shop for the calendar year I can’t help but think how apropos it is that Steve completes this year’s entries. Sure, he’s had to follow some all-time greats, but he once again does so with the power of his acrylics, a penchant for detail, and an unwavering faith in his own ability. This speaks volumes about Steve as a person, but also shows that he in his own right is an all-time great, a master among the new blood of a generation of artists still making their mark on the history of the genre.

Thank you Steve for completing this season of the infamous white and gold wizardress, and I certainly hope everyone reading this enjoys his stunning contribution as much as I have.

Steve Prescott was never a role-player. Really, he was never even a fantasy book reader, and yet he somehow found himself in the midst of a career visually detailing fantasy in almost every form of the genre.

Some people might find this strange, but there is an interesting angle that can be taken by someone not wholly vested in the depth of the genre in which they produce. I’d call it a clean-slate phenomena, as starting without pre-conceived notions of a particular beast, place, or character. This then means the advice of an art director can be more truly portrayed by the artist doing the work.

Steve creates from a space of uncluttered imagination, and that brings freshness to his style that sings on the page. 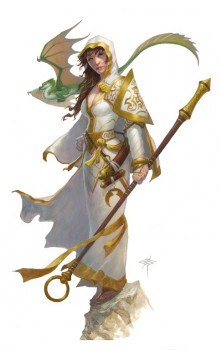 Now that’s not to say that Steve didn’t grow up enjoying the likes of Conan, Beastmaster, Clash of the Titans, and Willow, but as he wandered the halls of his youth there was more a drive for things science fiction related than rolling dice with a D&D crowd.

Art, however, was in his blood, and with the rise of Mike Mignola in the late 80s and early 90s the inspiration for that particular artist’s love of antiquities and mythology saturated Steve’s mind and helped open up new worlds.

Evolution wise, dark fantasy was riding the wave of vampire love as White Wolf expanded their multi-layered universe and Steve was hired to freelance inside that magnificent mansion of horror.

Using pencil and acrylic, Steve was on the cusp of the digital age, and as that tsunami broke across the art landscape in the early 2000s Steve learned enough to augment his work and stay fresh while still sticking to the fundamentals of physical painting in his studio.

The ability to transition, as best shown by artist Todd Lockwood, is the first key to maintaining a career as well as expanding your market, and Steve has managed it with incredible results.

His body of work shows its own evolutionary track, but there is one thing that never wavers or changes and that’s his ability to create character driven art. He is from the school of copious details where great costumes, weaponry, and equipment help define instead of weigh down.

He claims ‘whimsy’ is a part of his work, and certainly there is validity to that. Part humor, part comic, and a dash of reality make each Prescott work both original and eye-catching. Color is also a natural additive to his creations, the burst of acrylic paint giving everything a pop that explodes off the page, doubly so in the already vibrant World of Warcraft.

For this rendition of Lyssa, Steve broke out all the stops, our well-ventured arch-magi maintaining staff and dragon familiar, details I find are only added by those artists seeking full depth into the true art of wizardry. She’s a beauty, a power, and there is an almost elemental quality flowing through her in the way her sandaled feet angle precariously against the solid frame of a rock in a sea of white.

I want to say thank you to Steve for doing us the great honor of finishing out our year here at Black Gate, and if anyone wants to check out other stunning images from Steve or find out what he’s up to, you can seek that knowledge here.

is that first one a reynolds painting? That is one good painting either way.

This is also a very nice Lyssa. She looks so down to earth in this one.

Glenn: No, they are all Prescott pieces. Todd Lockwood said it might be better than his Lyssa, and that’s about as big a compliment as you can get. She is a stunning version.