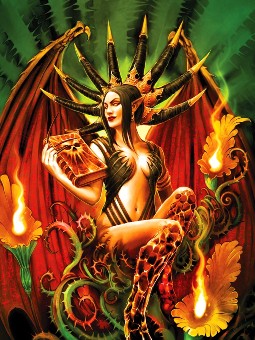 Art Evolution 2011 moves forward with the inclusion of a more modern artist, and I’m happy to report the second European talent of the year!

I have to say that I was/am a huge fan of Wizards of the Coast’s D&D 3rd Edition. I’ll not bore you with the details of why, or tell you it’s better than any other edition of the now venerable game, but I will contend that upon its release the art department spared no expense in bringing in new talent and vibrancy to the appearance of the game.

True, if any of you know the history, Hasbro bought the company in the early 2000s and promptly destroyed the final bastion of shared gaming artistry when they fired all their in-house artists from ‘the pit’, but I’ll contend for the sake of argument that not all bad things came from doing so.

By this, I’m saying that not using a set amount of salaried artists opened the flood gates for a whole world of new talent eager to make their mark on the game and the industry as a whole.

In 2003, just as Wizards was launching its D&D redux of 3rd Edition with D&D 3.5, I was taking note of this changing style, and it was then I first discovered the particularly insightful style of Eva Widermann. Supplemental books such as Cityscapes and Drow of the Underdark pushed me to wonder who this artist was, and to tell you the truth I was incredibly happy to see another woman in the mix. [I’m still taken with her ‘kobold thieves’ from Cityscape, a personal favorite even after almost a decade.] 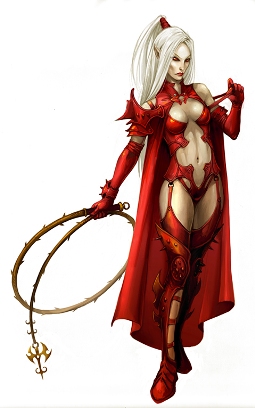 Now here is the true crux of the matter, when a company as large as Wizards decides to open its doors to a full world of artists, you had better be on your game. Although the massive amount of text delivered in all 3rd Edition books was filled with color art, it’s very, and I mean VERY easy to get lost in the high gloss landscape.

The road to artistic role-playing fame is littered with the fallen hopefuls of that open competition, the bulk of those who couldn’t make it in the RPG field devoured by the ever needy maw of video game companies who offered reasonable salaries and company benefits, like medical insurance, which is an unheard of mystery to the world of the freelance artist.

Eva, however, just kept on churning out great work for the old guard, and the world quickly took notice. I continued to follow her until the advent of Wizard’s 4th Edition D&D, of which I declined participation, and for a time the lovely lines of Eva’s work were lost to me. However, the advent of Paizo’s D&D 3.5 reboot, Pathfinder, found me once again in the thrall of a full blown Eva Widermann love affair.

The only oddity in her career portfolio is not one shouldered by her, but instead one I contend is carried by the industry’s art directors. Eva, like McAllister, Chernik, Danforth, and Aulisio before her, has been denied the right to do her fair share of covers. This is simply a tragedy, and one I can’t fully understand, but it’s my hope that it will be remedied in the near future. 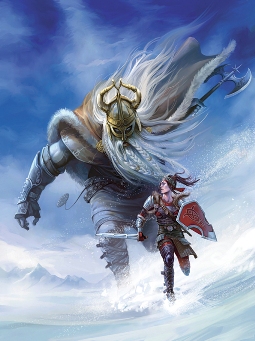 When I began my search for Art Evolution, I must admit that the concept trended to the past and not the present. In fact, I’ll go so far as to say that I whole-heartedly ignored all present artists other than contacting the new industry standard, Wayne Reynolds. Certainly this was no disrespect to the current array of talent, but simply a testament to the inclusion of as many founding masters from the past thirty years who helped pave the way for the artists of today.

Thankfully my project blossomed, and as I sat down in 2011 to continue it I understood that I’d need to rectify my omission of so many extremely talented artists from ‘the now’. A dozen names were on my list, but only three spots were available for this year’s series and once again I found myself swinging for fences with those I held most dear.

I still recall taking a breath and typing my first note to Eva, that ever-present mix of hope and fear palpable as I pushed send and waited for a reply. Before I go any further, I want to remind folks reading this that Art Evolution is a non-profit endeavor, and the artists contributing to it do so of their own desire. The fantastic talents you see here are in it for the love of the industry and the opportunity to participate in something that includes people who may have influenced them to be artists in the first place.

Eva, thankfully, was one of those who felt a connection to the topic and an adoration of those who have come before her. She, my friendly readers, is a gem among gems. Without hesitation, and even with a colon and back-parenthesis smile, she gladly agreed to lend her talents to the project.

Like the bulk of the current generation’s best, Eva started out a fantasy brat watching animated films like The Last Unicorn and The Black Cauldron. These tales began setting fire to her imagination before the inevitable discovery of role-playing in its purest form, Advanced Dungeons & Dragons.

She is attributed with a quote I find most telling, and something everyone who has ever had a dream should take to heart. She relates, “Those artists who are lucky enough to draw for books, they’re human just like me. They probably sat there once with these same dreams and looked at fantastic artwork, wishing they could have a chance to draw stuff like that too.” That, my friends, is the stuff of Eva Widermann, and it drove her into a roaring freelance career after gaining a degree in graphics and design in Munich. 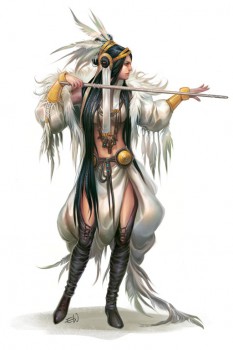 Looking at Eva’s images you see a softness that always draws the eye, her edging almost imperceptibly smooth and her characters taking on a veil of suppleness distinct to her and her alone. With each new image she creates, a life is born, and that is her most recognizable talent. While her greatest contemporary, Reynolds, might create near perfect renditions of RPG character sheets in human form, Eva instead creates soulful heroes that have a true place in any fantasy universe.

When you look at a Widermann character, you can tell she’s worked it out. Her fantasy folk seem to look back at you, the years of their lives spilling out in the turn of a smile, the tip of a head, and the way in which they carry themselves. She is the catalyst, the perfect mind, and her depth shows a love affair with her work that is the reason for her longevity and increasing market demand.

I find it serendipitous that this German born artist attributes one of her greatest influences to be the definitive American icon Norman Rockwell, and her images reflect that. Rockwell painted people, joy, humor and life and Eva brings the same care of a thoughtful brush to everything she creates.

The richness of Eva’s emotional connection to her characters might be the heart of her artistic package, but the icing on the cake, so to speak, comes from her more intimate knowledge of costuming. You see, Eva is a fan of reenactment and living history, the full range of period clothing having been felt, worn, and experimented with. You couple that with her added love of design and you’ve got magic on the page.

This eye for fashion detail helps bring form to function, and Eva’s world is one of contrasts shown perfectly in her rendition of Lyssa. Here, voluminous furs are met with sleek hair, slender legs wrapped in puffy pants. She is both regal and primal, a blending not easily achieved but nonetheless wonderfully mastered. To me I see the shaman, the natural feminine that is spun in a kind of bonded sisterhood with Chernik’s Mama Bear. She is beauty, she is life, and she is death…

Eva’s career is still expanding, and days once spent exclusively at Wizards now find her talents expanding worlds created by Paizo, Privateer Press, White Wolf, and Steve Jackson Games to just name a few. We here at Black Gate are lucky to have such talent involved in Art Evolution, and I’d once again like to personally thank Eva for taking part. She is one of the latest evolutions in the industry, and through her I love where we’re headed.

The Giants picture is the only one i’ve seen before this post. But is it one that stuck in my mind when i did see it. This is one of my favorite blackgate blog series posts.

Glenn: Thanks for the kind words. It’s a fun series to do, and Eva was really awesome to work with. There will be two more of these this year, so keep an eye out.

Yeah, I’m pretty sure you earned some hatred there from her fans. 😉

Keep up the great work, Scott. And more importantly, Eva!

[…] a sucker for great art. I’ll admit it. So Scott Taylor’s series at Black Gate continues to draw my eye… This week it’s artist Eva Widerman and dang she’s […]