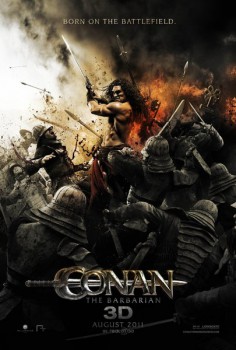 With a second weekend now under its belt Conan the Barbarian looks on track for an anemic $17 million in total domestic ticket sales, according to Box Office Mojo.

Considering it cost an estimated $90 million, and projections for total box office now look dismal, the film is already being called a bomb in the press. As other sites have noted, it squeaked out just $10 million in its first weekend — barely more than the original, and that was in 1982 dollars.

Screenwriter Sean Hood has already posted a thoughtful answer to the question “What’s it like to have your film flop at the box office?” at Quora:

The Friday night of the release is like the Tuesday night of an election. “Exit polls”are taken of people leaving the theater, and estimated box office numbers start leaking out in the afternoon, like early ballot returns. You are glued to your computer, clicking wildly over websites, chatting nonstop with peers, and calling anyone and everyone to find out what they’ve heard. Have any numbers come back yet? That’s when your stomach starts to drop.

By about 9 PM it’s clear when your “candidate” has lost by a startlingly wide margin, more than you or even the most pessimistic political observers could have predicted. With a movie it’s much the same: trade magazines like Variety and Hollywood Reporter call the weekend winners and losers based on projections. That’s when the reality of the loss sinks in, and you don’t sleep the rest of the night.

For the next couple of days, you walk in a daze, and your friends and family offer kind words, but mostly avoid the subject. Since you had planned (ardently believed, despite it all) that success would propel you to new appointments and opportunities, you find yourself at a loss about what to do next. It can all seem very grim.

You make light of it, of course. You joke and shrug. But the blow to your ego and reputation can’t be brushed off. Reviewers, even when they were positive, mocked Conan The Barbarian for its lack of story, lack of characterization, and lack of wit. This doesn’t speak well of the screenwriting…

Here I sit, coffee cup steaming in its mug and dog asleep at my feet, starting my work for the day, revising yet another script, working out yet another pitch, thinking of the future (the next project, the next election) because I’m a screenwriter, and that’s just what screenwriters do.

In the words of Ed Wood, “My next one will be BETTER!”.

A fascinating read — anyone who can optimistically quote Ed Wood in the face of real adversity gets my grudging respect. You can see the entire article here.

I’d say I feel sorry for him, but after seeing this movie I just can’t… In gaming lingo, he rolled a Nat 1… epic fail.

Long term DVD and world sales will probably break even, but it’s flopped. Great news, for obviously word of mouth got out from the fans to the general public that it was just a stupid, generic plot that tried to make up for it with fx, but was like EVERY single rotten adaptation after the Arnie movie, PC and just surface with perhaps a tiny bit more gore/porn but even that likely tame by today’s standards.

I think we need to send a message to these “Producers” that they can’t just make money by licensing a product and excreting some dumb re-hash. They are trashing fond childhood memories, trying to suck our last dollars in a crushing economy. Making “safe” bets, making sure there’s no “risk” of a good, innovative plot or worse a NEW story.

We should boycott this trash. Just send a message we want real entertainment with bite, an edge a story beyond crude formulaic plot. They churn out glossed over crud, we mmmaybe buy/rent the DVD 3 months after release, when the thing will be marked down/rental clearance… Really, they aren’t so big “don’t like it/don’t buy it” won’t hurt them.

Yes, we can call it a bomb at this point. An opening weekend is everything in the current movie marketplace, with much narrower windows and tighter competition. This end-of-the-summer occurrence where Rise of the Planet of the Apes and The Help both managed two weekends at #1 is unusual. Conan‘s opening take of $10 million was below even modest expectations, and it dropped 69% in its second frame; a drop that size is acceptable if the film grabs big numbers opening weekend, or is inexpensive (this is the common drop for a horror film). For Conan to open beneath Spy Kids 4, which was hardly marketed, at barely $10 million, then to plummet the next weekend is terrible news for a $90 million film, and this is without considering prints and advertising, which is at least another $20 million. It may make some money worldwide—hard to tell at this point since it hasn’t opened in many markets, and Lionsgate may just break even with in the long-run with residuals. But that’s still a disaster, especially when Lionsgate planned this to become a franchise-starter. From a pure numbers stance, the 2nd weekend is early enough to call the film a box-office flop.

Then there is the 3D issue. Audiences have shown they will pay for 3D for a mega-event film that cost $200 million, but far more hesitant otherwise. Even though Captain America is a hit, it did far less business from 3D screens than 2D screens. It seems people didn’t want to shell out for the three extra bucks to see Conan in 3D. I found very few screens in L.A. showing it in 2D, and I would have seen it in 2D if I could. The 3D for the film is awful. Half of the movie I couldn’t even tell if it was in 3D, and then suddenly some piece of rock or scenery would jut out weirdly and look bizarre. With the flop of Fright Night and Glee 3D at the same time, I think we’ll see studio start to pull back more on the three-dimensions, and only use them on massive projects.

I can’t blame audiences for staying away: the trailers were terrible, the marketing seemed to offer nothing new, the reviews were awful, the immediate word-of-mouth even worse. Although it bothers me that a character who is so important to me should be attached to a box-office fiasco . . . the film deserves all the criticism hurled at it. I’ve seen a huge number of movies this summer, and Conan the Barbarian ’11 is the worst one I’ve seen.

Even in the remake happy environment that is Hollywood, the failure of this movie means that we won’t see Conan on the big screen again for at least another ten years. And that’s being generous. Conan doesn’t have the large fan base of Star Trek or Firefly. Most who know Conan only know the Arnold movies. That’s his general popular context. The question of weather or not this was an adequate representation of the Conan character is somewhat beside the point in the larger context of getting Howard’s properties into multimedia. The movie studios will see the failure of this movie as a failure of the brand name, and that makes it harder to pitch any Howard story or character, however well developed the script and characterization.

I liked the movie. I’m sorry it didn’t do better. It’s the larger implications. however, that are disappointing.

Daran: Firefly has a ‘hardcore’ fanbase, but to compare it in size to Star Trek is like an ant to an elephant… they just aren’t the same beast.

I think my point still holds that Conan does not have a large enough, or rabid enough, fan base to get another movie made soon.

Conan does have a large and rabid fanbase, but not a stupid one. Why would we want another terrible movie made? I’m hoping as few people as possible have their vision of Conan informed by this movie as possible.

> I’m hoping as few people as possible have their vision of Conan informed by this movie as possible.

I think “as few people as possible” is a good estimate of how many people saw the movie.

Yeah, I must admit, I couldn’t get anyone to come see it with me, and afterward I was quite glad of that fact.

That said, those first 20 minutes or so with Leo Howard are totally awesome. Too bad the story just hadn’t stayed right there.

[…] as Robert E. Howard’s barbarian in last year’s Conan the Barbarian, one of the biggest bombs of the […]