Art Evolution, the project that shows the personal take on a single unifying character by the greatest artists in the RPG field, continues. But if you’ve missed some, you can find the beginning here.

After last week’s entry I had my ‘3rd Edition Lyssa’, and I was ready to move further back in my timeline. For that purpose, I got into my way-back machine and dialed in the dawn of RPGs, the year 1976. 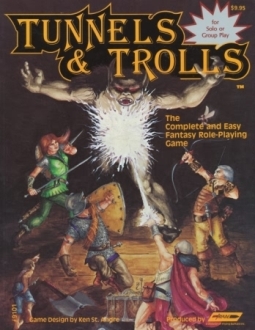 If you go back further than 76’ you’re fooling yourself if you think anything a gamer played was more than an advanced miniatures game. However, in that year D&D was beginning its infant run and Flying Buffalo put out its first module Castle Buffalo for Tunnels & Trolls.

That now infamous and out of print module was graced with a cover by Liz Danforth, the Queen of the Role Playing Game. Liz was doing RPGs before the world knew what RPGs were, and although I was only five years old at the time, I would come to appreciate her grace and dedication when I later discovered Middle-Earth Role-Playing from Iron Crown Enterprises in the mid-eighties.

As you’ve already seen, the first book I ever read was The Hobbit, so it certainly came to pass that when I.C.E. started producing role-playing in Tolkien’s Middle-Earth I was right there ready to buy a part of the experience. 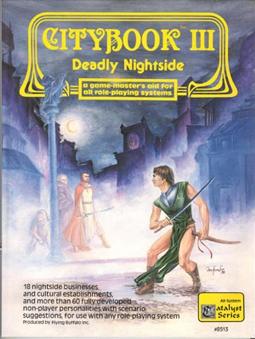 Waiting behind those pages was more Danforth art, her style having advanced from seventies roughs to fluid and regal sets that helped give a feel for Middle-Earth all lovers of the genre could appreciate.

Now given, Danforth at her core is a black and white artist, her colors doing little to showcase what she brings to the table, but that hasn’t lessoned her impact on me or gaming for more than three decades.

So, in the depth of the year I took up my torch and went out in search of Liz. I found her among library stacks and the fantasy landscapes of Blizzard’s World of Warcraft. She was an easy friend, a diehard defender of all things role-playing, and a genuine spirit I found a delight to speak with. 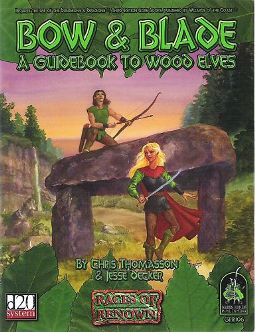 Her interest in the project blew me away, and as we discussed her participation I became convinced for the first time that what I was doing was note-worthy. I was feeling a true sense of worth, and there was a respectability I’d never had before that was leaching into my professional life.

Was this what it meant to be recognized for something? After a decade of misery in the field of writing, was this a tiny glimpse into the window of success? Perhaps, only time would tell, but I did have a kind of inner-smile that wasn’t present before, and as Liz and I made the final arrangements for her inclusion I couldn’t help but think how lucky I was to know her and all those I’d met in this truly incredible industry.

Lyssa, by Liz Danforth [with coloring by SS Crompton]

Before there was Jeff Dee or Roslof or Otus, Liz Danforth was already making a name for herself as a gaming artist. She’s created works in every Era in gaming, working for so many companies that even their acronyms almost create a full alphabet.

If there is a genre, Liz has done it, and that makes her art uniquely qualified to stand as a marker for where we’ve come. She’s primarily a monochromatic artist, a pen and inker, but that too is a testament to her longevity. Her days in gaming began before color was even a concept; RPG companies still pulling themselves out of the primordial soup of the seventies on shoe-string budgets and basement print-runs.

Liz’s style reflects that, her work marking an innocent time, yet there is no mistaking a maturation and lovely growth in her transcendence. 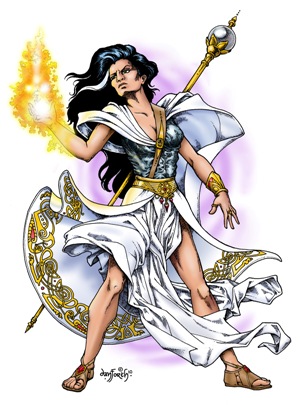 She once confided in me that she learned to read from Tolkien at her mother’s knee at the age of five, and I think that echoes in her imagery. Such an experience has provided her art with an unmistakable flare, and the touch of her guiding hand helped define genres such as Middle-Earth all the way to the CCG rage of Magic the Gathering.

Above all, Liz transcends from age to age, the unerring focus on her craft shining like a guiding light for all other artists to follow. Liz, you’ve striven your entire life to bring a better light on role-playing, and your art is a testament to that. For myself and all those who’ve ever rolled dice or clicked a mouse, I bow to you, oh Queen of the RPG…

Current Status Liz Danforth: She is still working freelance and can be contacted about art, editing, or writing projects. Liz is always in the market for interesting assignments. You can view almost anything she is up to on her website.
Current status Steve Crompton: Still doing comics, games and digital coloring. His art or graphics services can be found here.

This is a magnificient example of tough beauty. There is NOTHING soft about this Lyssa, not even sexy–though I’m sure men WOULD find her sexy. I don’t think this Lyssa has the patience for that sort of thing.

Starting with Why | Oakheart at LizDanforth.com

[…] Scott wrote about fourteen artists before he got to me. He talked about what the artists and the games they’d worked on, what those games meant in his gamer’s life, about his adventures cajoling the reluctant ones to take part in the project, about getting to know the sometimes quirky personalities of the people behind the artwork. Some essays were funny, some were touching. What he wrote about Larry Elmore brought tears to my eyes. And then he got to me. […]

[…] ‘Middle-Earth Lyssa’ was complete, and I was looking for more recruits. During this whole process I’d kept to my promise, making sure that every person I’d come in contact with, even those who’d turned me down, continued to get updates. […]