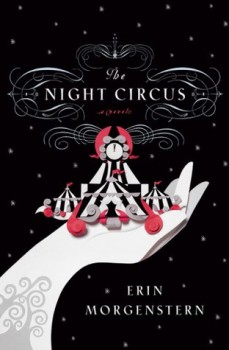 When I first heard about new author Erin Morgenstern’s book The Night Circus, it was billed as an antidote for the withdraw symptoms Harry Potter fans were experiencing. Though I wouldn’t go so far as saying I’m having Potter DDT’s, I must admit that the sudden void left in my literary life by the lack of pure escapism fantasy was making me a bit twitchy.

But good luck living up to my Hogwarts-sized expectations, I thought. Another book about magic we don’t need.

However, once The Night Circus hit store shelves on September 13th I couldn’t seem to get around the title. It just kept nagging my imagination, which conjured up images of an entire carnival appearing over night in what yesterday was just an empty field, and only being open for business after dark.

“If they’re grouping it in with Harry Potter, it must be a kids book,” I thought, and tried my best to ignore it.

After all, J.K. Rowling’s ability to hit that perfect chord between writing for kids yet entertaining adults was a rare thing indeed.

I busied myself with other things and shunned The Night Circus for a whole 10 days.

Then I read that on September 22nd Ms. Morgenstern’s very first outing as a novelist had reached number eleven on USA Today’s bestseller list, and that a full nine months before the book had hit the stands Summit Entertainment had purchased the movie rights. 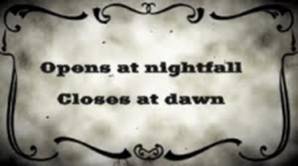 Not being able to stand it a minute longer I bought a copy.

At the dropping of the “f-word” in the first chapter, I realized this wasn’t a kid’s book. And though profanity in no way dominates the text, I would say that The Night Circus deals with “adult themes” that put it beyond the typical Harry Potter demographic.

First objection overcome, after which all the rest of them domino’ed right behind it.

The novel opens with a quote from Oscar Wilde: “A dreamer is one who can only find his way by moonlight, and his punishment is that he sees the dawn before the rest of the world.”

The circus arrives without warning. No announcements precede it. It is simply there, when yesterday it was not. Within the black-and-white striped canvas tents is an utterly unique experience full of breathtaking amazements. It is called Le Cirque des Rêves (‘The Circus of Dreams’) and it is only open at night.

But behind the scenes, a fierce competition is underway — a duel between two young magicians, Celia and Marco, who have been trained since childhood expressly for this purpose by their mercurial instructors. Unbeknownst to them, this is a game in which only one can be left standing, and the circus is but the stage for a remarkable battle of imagination and will. Despite themselves, however, Celia and Marco tumble headfirst into love — a deep, magical love that makes the lights flicker and the room grow warm whenever they so much as brush hands.

True love or not, the game must play out, and the fates of everyone involved, from the cast of extraordinary circus per­formers to the patrons, hang in the balance, suspended as precariously as the daring acrobats overhead.

What I came to adore about the story was the way Morgenstern creates such intensely vivid images with her prose that you can very nearly feel the cold of the ice garden, or smell the hot sweetness of the delicate sugar flower candy.

Everything about this world is magical, but not in the innocent way that the Potter world is. Instead, there is a faintly ominous feel to The Night Circus, as though the stark black and white of the surroundings, utterly devoid of any other color, is somehow symbolic for what is happening inside the gates.

And all the while that very strange clock above the entrance ticks away the hours until dawn.

Much like the labyrinth of the circus itself, once you get in between the pages of The Night Circus you are lost, and beneath the pleasure of discovery is that disconcerting feeling that something bad is lurking around the next corner.

As I said, perfect Halloween reading.

Immediately wanting to go through the tale again to pick up every sticky bit that I may have missed the first time through, I downloaded the audio book as soon as I finished reading.

Much to my delight I was greeted by none other than Jim Dale, the genius of voices behind all seven Potter audio books. With Jim telling me the story of The Night Circus I was mesmerized all over again.

Done properly, this could be one blockbuster of a film. Let’s hope.

Check out the video teaser for The Night Circus here to get a little visual taste of what’s in store. Then by all means, read or listen to the story before the clock strikes midnight on October thirty-first.

“Trespassers will be exsanguinated”

Have you already discovered the mysteries of The Night Circus? Post a comment or email me directly at Sue@blackgate.com.