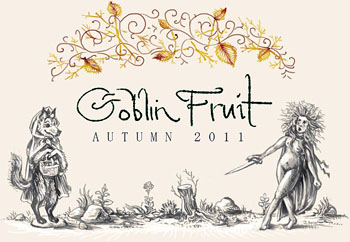 The new Goblin Fruit is LIVE!!! It’s ALIVE, I tell you!

Now, I know I’ve said that before. Always the same way, too. “LIVE!!!” must be capitalized, with exclamation points, because, you see, I’m pretending I’m Frankenstein. I’m sure you knew. It’s not like it’s a secret or anything.

This new issue features poet Neile Graham, including an interview in which her poetry is described as “very green and very blue, full of cedar and rain and stone and sea.” Here is a hint, a taste, a tongue’s dip worth of her verse:

“…Hillfolk trade their cranky babes for our sweet sleepers. Tempt away

our pretty ones. Make deals we pay for. Seduce our poets
underhill for seven silent years then gift them with sore truth…”

– The Ones Outside Your Door

There is, as usual, a WONDROUS editor’s note, in which I learned that there is not one but TWO AUTUMNS! Here in Chicago, on this blustery grey day, we’re having our Second Autumn. (Who knows? It might be First Autumn again tomorrow! The nature of the Midwest.)

I’ve been telling people this all day. “Did you know there are two autumns? There’s Summer-Autumn. And there’s Winter-Autum. Why? BECAUSE AMALFACE SAYS SO!”

She says it better though.

As usual, Oliver Hunter’s art is eminently slurpable, full of wolves and apples and knives and girls. Mmn. Wouldn’t it be fun to live inside his mind? Would it be wallpapered in Goblin Fruit art I wonder? I’d decorate my house in Hunter’s wolves, if I could.

Speaking of knives, sixteen poets have whetted their quills for our pleasure. I will introduce them here, but am leaving it to you to seek out their acquaintance in this latest issue.

The first, Eikelboom’s “The Irish Fall,” begins, “We woke to the cawing of the crows today,” which I should repeat each morning upon rising — an incantation inviting mystery in.

“…and then you say
that the copse is a graveyard
for witches and each tree is actually
a stick and far above on each one,
there is a carousel horse that I cannot see.” 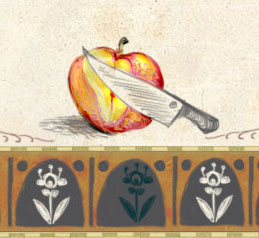 Pelaez’s “The Girl with the Silver Hands” reminds me of so many stories I’ve half-forgotten — “The Two Sisters” and “The Juniper Tree,” particularly — but it is also its own creation, apples and moonlight, pears and skin and silver eyes.

She puts her head on his shoulder
and weeps poison that sears him.
Two women sit facing each other.
They have blind eyes and hungry lips.
Between them is a bowl of hexagrams.
Bai says to Xiao Qing,
It’s your turn.

THEN! Then there is “When I Arrived, This Is What She Said” by C.S. MacCath. This one gets that ocean taste in the back of your mouth. That wild sorrow that makes you want to walk against a strong wind? That’s what this one does.

“And come, oh daughter of too many journeys,
gray in your hair, lead in your heart,
sore-footed and stumbling, to the sea,
where we will weep together; stone, salt and water
until your sorrow erodes into sand.”

Campbell’s “the boy in the cardboard box” was wrinkly and delicious, just right.

Robertson’s “Harvest” starts out with the cry, “Don’t flay me to the bone, love.”

Colona speaks from a dead woman’s mouth, and it is full of slyness and flies.

Michel’s “Tephramantica” twists in ways I’ve never seen: “Now you rave an ache for what morphined the wedding years.” (ETA: It’s a Triskedekaliad! That means, I just learned, that if you count the syllables in each line, they all amount to a MAGIC NUMBER! Go on! Try it! Very COOL!!!)

Joseph Harker’s “The Magician Reversed” was a sepia carnival of smoke and mirrors.

Graham’s sonnet is… Well. It’s funny! I don’t know if it was meant to be funny. But there’s a rue in that lovelorn confession — “I’m every idiot who’s ever stood/ At dead of night beneath a balcony…” It’s old fashioned. It requires a velvet doublet and a rapier and a fine feathered hat. I liked it!

So many of these poems (Cheryl Stiles “Elemental” no exception!) are so… so… AUTUMNAL. I mean, I know it’s fall, and I know this is the fall issue, but these poems TASTE like fall. “Can you taste the ashes on your tongue?” Stiles asks. Why, yes! Yes, I can. Ash and a lot of apples. Fruit abounds. The harvest is in. You can hear the wolves of winter howling over the horizons.

Erik Amundsen’s “Wolf Peach” is dizzyingly delicious. I mean… How can you describe the sensation of salivation these images evoke? Without repeating the whole poem back to you? Okay. I’ll repeat a little:

“And when the sun got ripe
red and heavy, were you frightened
to be among the wolf peaches with the wolves?
They gave you something to eat that at first thought was poison,
heavy and red. They go pink when you boil them, put them in,
take them out quick, just to loosen the skin.”

Oh! (Can you tell I’m blogging this while reading? Live-blogging? Is that the term for it?) I’ve never read a Lyn C. A. Garnder poem before! “Witch Girl” — “She’s more than wolf-bred.” I love her! I love this poem. Oh, it’s like a whole story, cooked down for the marrow. Oh, YUMMY!

Joshua Davis closes the curtain on this issue with a dark god’s trick:

Ladies and Gentlemen, I have barely given you a trail of moon pebbles to follow to that cottage in the woods. Won’t you go there? There are such treats in store! Try not to eat the windowsills. Avoid ovens. Always keep a bone in your pocket.

We last covered Gobin Fruit with the Summer 2011 issue.

Claire Suzanne Elizabeth Cooney. I would like to keep you. May I keep you? I would keep you so well, and give you such ribbons for your gowns, and feed you tasty jam, and do SUCH things to your hair with my teeth. Only give me leave. Just the once. That’s all I need.

You may. If your pocket’s big enough. And your chain is long enough. And you feed me, occasionally. And compliment me. I’m a SUCKER for compliments. And write me poems for my birthday… OH, WAIT! YOU DO THAT ALREADY!

Claire! All that delicious tempting, and then you hide the link to the issue. I had to hunt to find it, hiding behind Amal. Tsk.

GOBLIN FRUIT is too cool. Plus, they come out a lot more regularly than we do. I hate magazines like that.

Ah, heck, you’re right! What I get for writing at work! Heh heh heh. WILL CHANGE!

Oh, so that’s where the poetry I want to read is being published these days. Thank you for the big chunky quotations. I couldn’t have been sure without them.

This is your first exposure to GOBLIN FRUIT? Really???!!! THEN I HAVE DONE MY WORK!!! Oh, HAPPINESS!

So many thanks they won’t fit here. I’ll tell you a secret: (lips close to your ear, hand resting lightly on your shoulder) Triskedeka = 13. Can you count to thirteen? Try it on any random line… (draws back slowly, then vanishes.)

I JUST TRIED ON THAT MORPHINE LINE!
Now I must go count all the lines!!!
THANK YOU FOR THE SECRET!!!

I AM GOING TO ADD THAT INTO THE REVIEW!!!