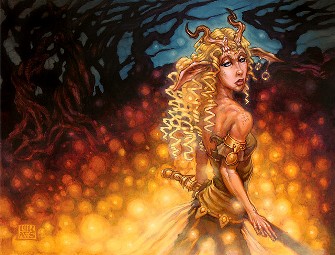 Ok, so I work as Art Director here at Black Gate L.A., and that means I get to see a good amount of really fantastic art, especially where Art Evolution is concerned. That being said, it’s not often I get introduced to talent on the magazine that I wasn’t previously aware of. Still, it does happen, and one such artist is Chuck Lukacs.

Now that’s not to say Chuck is new to the fantasy industry, far from it, but as I’ve never been a Magic the Gathering player, and with the mass of D20 D&D books hitting the shelves since 2000, you can’t always identify every artist you see.

Chuck, however, was doing his due diligence during the 2000s, and his talents were recognized by many youthful minds along the way. He’s graced the pages of dozens of RP books, as well as Magic collections, and his art finally made it to me as I read the tales of Morlock the Maker which appeared in the pages of Black Gate’s print edition. Here, Chuck helped define James Enge’s character that would eventually go on to produce full novels in his own right.

I must say that I was inspired by his work, and there was something about the craft, an indefinable ‘it’ that drew me in each time I looked over an image. Chuck’s style spoke to me somehow, and that reminds me of a little story. 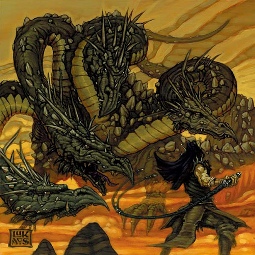 David Deitrick has become a very close friend of mine over the past couple of years, and he never, ever, says something he doesn’t mean which helps endear him to me. We are alike in that quality, and it’s certainly something that’s gotten us both into a vast amount of professional trouble over the years. I’m often reminded of the old saying ‘If you can’t say something nice, don’t say anything at all’, but boy that’s hard for me to live by.

Anyway, that being said, David seems to enjoy my company for the same reason, and he once said to me, ‘you know, the reason I knew you weren’t some deranged fan or out to take advantage of me was because you told everyone your favorite artist was Jeff Laubenstein, which meant you were either honest to the core or crazy, and you just never struck me as crazy.’

I took that as a complement, as I’m sure it was meant to be, but what it tells me is that I like what I like and I’m not afraid to say it. When I saw Chuck’s work, I felt that same tinge of delight I get from the ‘odd’ of the industry, and yes, I really, really, liked it. 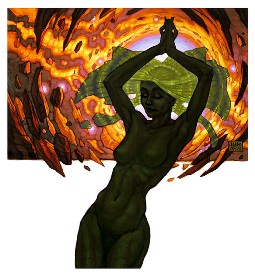 He’s a heck of a character, and a man who loves to create. I once asked him to do a piece for an article and he was absolutely obsessed with getting his hands on another Black Gate short story. Seriously, I wasn’t sure if he’d do the commission without a submitted story because he loved what John O’Neill put out, and really I can’t blame him. I think that speaks volumes about how he creates and that he’s as vested as any author in the characters he gets to help design.

This passion spills out on the page, and it’s in every curve and flash of color. When an artist cares, it translates to better work, and I’ve yet to see something of Chuck’s that I thought was phoned in, which a huge complement in this industry.

Chuck was not only kind enough to grace the pages of Black Gate, but lucky for all those here on the website he’s agreed to lend his innumerable talents to Art Evolution 2011. I couldn’t have been more pleased when he informed me that he’d take part, and I hope all of you who know his work will be once again astounded by his version of Lyssa.

If Russ Nicholson and Jeff Laubenstein had a love child, it would be Chuck Lukacs. Chuck’s work holds an edge of the malformed, his figures strange and his landscapes having a tinge of Suess-like charm.

This style, this ‘odd beauty’ as I like to call it, sets him apart from most of his contemporaries and that is a prime reason why he’s risen to the upper tiers of his profession. Being better by being different should be the challenging call of his art, and it carries over in almost everything he does. 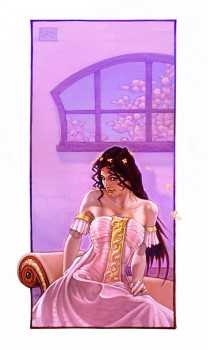 He’s a man who came of age in the eighties, found joy where most fantasy fans did, the Rankin & Bass Tolkien animations, Dean album covers of Yes and Asia, and the AD&D talents of Jeff Easley.

This spurred his inspiration for adventurous art to a new level and when he entered his chosen field of study his quote below helps define why his art is what it is: ‘I’ve been rather influenced by the many Craft revival movements throughout history; Japan’s Ukiyoe period, the Pre-Raphaelites, Art Nouveau, Brandywine School, Music Poster Art of the 60’s & 70’s, and their Hip-Hop torch bearers, not only for their remarkable symbols and content, but also for their ability to create positive social change through utilizing traditional techniques.’

There is an adaptive quality to his work, a sense of speed and flow, and his use of color is perhaps the brightest of any artist in this collection of talent. Lukacs is bold, his initial oil strokes being supplemented by digital overlays as his ever evolving style goes wherever the industry takes him.

This exotic color palate lends well to the almost ‘fey’ qualities of his characters, the otherworldly feel spinning content that takes the viewer to almost elemental planes. He creates a feel very unique to him, but I can always sense the Roger Dean influence, the flow of images appearing in a kind of lava lamp eyeglass that sweeps across the vistas and characters he paints.

If you enjoy the imperfect, the almost surreal, then Lukacs is your artist, and among his contemporaries nobody has found a way to do it better.

Chuck’s version of Lyssa is one of his more lovely works, the image portraying an older and softer side to the epic wizardress. There is power there, the subtle coloring drawing the viewer into the image almost like a spider’s web ready to ensnare a fly.

I say bravo, and thanks again to Chuck for making this possible. If you are interested in what Chuck’s currently up to, you can find more information on him here.

I’m inordinately proud of the authors we’ve discovered and promoted in Black Gate. But I’m just as proud of the artists we’ve helped discover and highlight, and Chuck is near the top of the list.

Sometimes we partner a new author with a new artist, and it turns out well. The supreme example came when we took an exciting new author named James Enge, and took a chance with a new artist named Chuck Lukacs, asking him to do a portrait of an enigmatic character named Morlock.

That was back in BG 8. Chuck did such a stellar job that his portrayal has become inseparably connected with Morlock, and his artwork was included with the first collected edition from Pyr — an unusual honor.