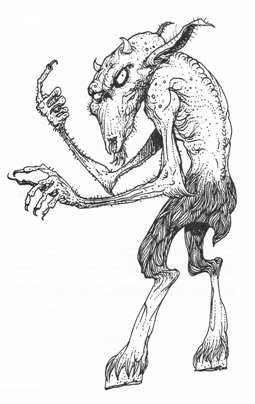 Yes indeed, there’s yet another addition to Art Evolution! Now you didn’t think I’d sit idly by after the success of my 2010 Art Evolution Project wrapped up did you? No, certainly not, and although I’d managed to hit twenty artists in that mighty collaboration, I wasn’t satisfied because I knew there were many more artists still out there who deserved spots in what my project finally materialized into.

Still, I must admit I was pretty burned out after the initial run, so I took a couple of months off, focused on Art of the Genre, and retooled as I let brew the countless images of other great RPG artists still on my now venerable list.

By February I was convinced that Art Evolution needed further contributions in the modern era of role-playing, and I also thought that at least one more 90s talent and an old-school contribution would best serve the spectrum of what was already in print. To do this, I decided I’d include only five artists this year, five stalwarts who, like all those before, defined and inspired with work that was a step above their contemporaries.

So, without further diatribes into the ‘why’, let me take you to the ‘who’, but first, we strap into the time machine bound for the dawn of the big 80s… 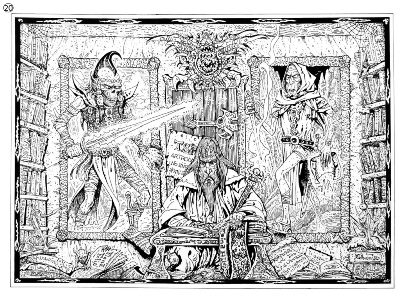 In 1986 I was basking in the glow of big hair bands and glam rock as I went through the doldrums of high school. During my sophomore year U2 produced The Joshua Tree, and I hated it with the white hot passion of a thousand suns. Why do I bring this up, you might ask? Well, I’ll tell you; because that’s the kind of writer I am, always trying to deliver the absolute truth of my own stupidity.

On a pure musical talent level, the bands I worshipped, Cinderella, Motley Crue, Whitesnake, and Poison just can’t compete with U2, and it’s especially true with U2’s seminal work on Joshua Tree. At forty, after studying, listening, and truly learning about music I can say that I was indeed stupid concerning my musical choice in those days, and that, yes, even I make mistakes. 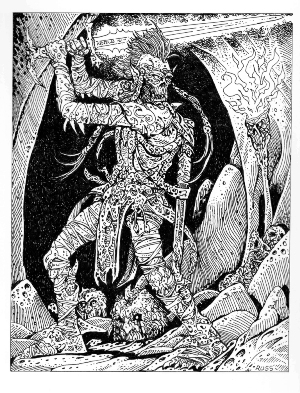 I feel the same can be said for TSR UK’s only hardcover AD&D supplement The Fiend Folio. I know this book has gotten a great deal of bad press over the years, and yet as I look through its pages and see the passion that went into it, I’m afraid to say that I was wrong in my initial assessment of this work as well, especially concerning the art of Russ Nicholson.

To my ‘then self’, the teenage boy drunk on the cool-aid of Larry Elmore, Nicholson’s line work was scratchy, unkempt, rumpled, and unappealing. Like most gamers, I brushed this book aside and it sat on my shelf for nearly two decades before I began the Art Evolution Project.

I can still remember the day I took it down, my mind now well-aged with artistic knowledge and I sat there shaking my head in dismay. How, HOW could I have disliked this work? Was I that big a fool to not see the absolutely splendid genius involved? The short answer, of course, is a resounding YES!

Kicking myself repeatedly for Russ’s omission, I went searching the web for any sign of him and thankfully it wasn’t too hard. Russ, you see, is still putting out fantastic art, and with anxious heart I emailed him to ask about his possible participation in this year’s Art Evo.

Lucky for me Russ is both extremely talented AND a true gentlemen. He happily agreed, and I slated his contribution of Lyssa into the June slot. I want to say thank you, Russ, for helping out this old gamer and honoring both Black Gate and all the art fans that have migrated to this site for the last year and asked about you. Now with no further ado, it’s my honor to introduce the newest member of Art Evolution!

Nicholson is a line man, a black and white ‘magi of monochromatic creation’, and perhaps that’s why he’s not as well known as his contemporaries here in the U.S., but that shouldn’t detract from the skill he wields to create almost inhuman detail on a blank page.

His love of mythology, history, and fantastic worlds is evident in each line he produces, and it’s no wonder that art scholars have sometimes described his art as ‘the best color work in black and white’. Even from his earliest gaming stages, those found in the pages of Games Workshop’s White Dwarf, Russ regaled us with intricate creations that stand the test of time like the Pyramids or Great Wall. 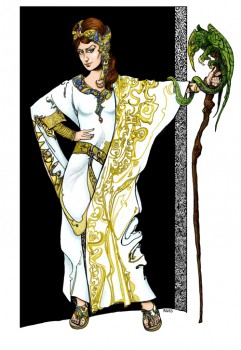 Historic references drip from his imaginings, the subtle blend of Celtic, Norse, and Mayan cultures mix with the studied vision of Renaissance masters like Albrecht Durer, Hieronymus Bosch, and Pieter Bruegel the Elder. When asked how he would give voice to his creations, Russ himself states, ‘I try to make pictures from words.’, and I think that resonates in everything he creates.

He makes his mark with flow, with detail beyond the normal scope of things. Is there a possible distraction to all the movement found in Russ’s work? No, not if you see the method in his scrolling magic. He captures every inch of space; everything has a purpose, a perfect detail, a scratch of ink that tells a story.

Like Laubenstein who came well after him, the art of his craft has an ugly quality that somehow turns to beauty before your very eyes. What he chooses to represent for the purpose of gaming is the dark, the maligned, and the evil. He wields his pen with untold care as he etches out the boney frame of a Githyanki or a Svirfneblin. His action shots are no less defined, many depicting a kind of pure seventies horror with great swaths of blood along with the terror of victims being carried away to dark ends.

Nicholson is also a man of comic style, his art lending itself to the unreal instead of traveling the road of the truism homage. This brings out the fantasy, the adventure, and the spark of imagination that makes role-playing so wonderful. Before there were the massive swords and spiked hair of today’s anime generation, Nicholson was bringing his own form of comic imagery. Yet unlike the present style that lends to the shiny vampires of the Emo tweens, Russ’s visions of more neo-Gothic dooms take on a dark edge that is anything but anime. What am I saying? I’m saying this ain’t World of Warcraft, and you better take notice because it kicks butt and takes names more so than a great deal of the passively pretty artwork we see today

For Lyssa, Russ asked if he could use color, and never being one to interfere with genius, I agreed, the result becoming a dramatic amalgam of Fiend Folio and modern glossy-page glory. Still, look at the turn of the eye, the rise of the hair, and the brilliant deviltry of the staff-sitting familiar. This is the seventies in all its glory even if mixed with the pallet of Photoshop. I’m reminded of Roslof, of Danforth, and I can’t help but wish I had created a Dungeon Crawl Classic for this rendition to delve.

If you want to know more about Russ, or what he’s currently up to, I suggest taking a look at his outstanding blog here.

I like this art style, a staple of the “Fighting Fantasy” game book series:-) IMO, looking at it now, I wonder how much of an effect Phillipe Druillet had? I’m reminded of his early work, such as the cool anti-hero Vuzz.

[…] D&D history? What a cool book! Well, Scott Taylor at Black Gate managed to get a sample of some new art from artist Russ Nicholson, one of the artists involved with that great book. Be sure to check out the article to learn more […]

Green: Thanks for taking a look. I was wondering if anyone remembered his stuff on BG enough to comment, but knowing his FF stuff is awesome.

[…] again it was a thrilling ride. Black Gate had the distinct pleasure of featuring the talents of Russ Nicholson, Janet Aulisio , Eva Widermann, and Chuck Lukacs this year and our final entry comes from the epic […]

[…] D&D history? What a cool book! Well, Scott Taylor at Black Gate managed to get a sample of some new art from artist Russ Nicholson, one of the artists involved with that great book. Be sure to check out the article to learn more […]