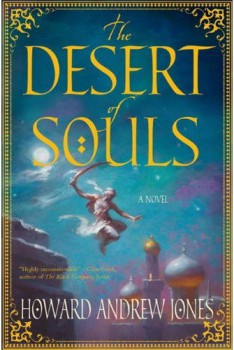 Copies arrived here in the Black Gate offices last week, and it is a beautiful, beautiful book.  Here’s the jacket copy, just because I think it’s cool:

The glittering tradition of sword-and-sorcery sweeps into the sands of ancient Arabia with the heart-stopping speed of a whirling dervish in this thrilling debut novel from new talent Howard Andrew Jones.

In 8th century Baghdad, a stranger pleads with the vizier to safeguard the bejeweled tablet he carries, but he is murdered before he can explain. Charged with solving the puzzle, the scholar Dabir soon realizes that the tablet may unlock secrets hidden within the lost city of Ubar, the Atlantis of the sands. When the tablet is stolen from his care, Dabir and Captain Asim are sent after it, and into a life and death chase through the ancient Middle East.

Stopping the thieves — a cunning Greek spy and a fire wizard of the Magi — requires a desperate journey into the desert, but first Dabir and Asim must find the lost ruins of Ubar and contend with a mythic, sorcerous being that has traded wisdom for the souls of men since the dawn of time. But against all these hazards there is one more that may be too great even for Dabir to overcome…

And here’s one of the blurbs, from author Dave Drake:

An Arabian Nights adventure as written by Robert E Howard. It is exciting, inventive, and most of all fun.

The Desert of Souls is available in hardcover from Thomas Dunne Books.

I will be ordering this in short order, as it is not available in the local bookstore. Just wanted to say congratulations Mr. Jones, I’ve long enjoyed your D&A tales, and this sounds to be a riveting ride.

Thanks, Jason. I appreciate your support, and hope you enjoy the story.

Congrats, Howard! I preordered and can’t wait to read it!