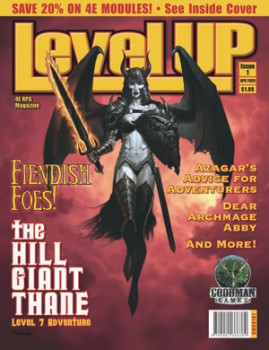 Gaming magazines can be a great asset to planning a roleplaying game, but I’ve often considered them to not be worth the cost. This one, reviewed by our very own Howard Andrew Jones, looks like it gives quite a bit of bang for the buck (or, in this case, 2 bucks). The publisher, Goodman Games, has a solid track record for producing quality game supplements.

I like this magazine. Issue 1 comes in at 55 pages, the first offering of a new quarterly publication from Goodman Games devoted to Dungeons and Dragons. It means to fill some pretty big missing boots – you probably know the ones I mean if you’re an old fan of the game – and I think it’s off to a good start.

The editors plan a series of standard features, among them advice to players, expansion material for Goodman modules, a bestiary, info on gods and goddesses, game mastering tips and tricks, and at least one long adventure and an encounter. There are online venues that offer much of this information, but it’s great to have it available in one place, organized under one cover and presented with a consistent level of quality.

This issue features a number of interesting ideas. One of my favorites is weapon-focused warriors, characters who enhance their paragon path by specializing in a particular weapon. My favorite of the suggestions here is a crimson cleaver, a brutal axeman. Over in the GM Gems section of the magazine you can find templates for some fiendish foes to throw against your players: the Demon Knight, the Hell Beast, and the Hellfire Adept. Each template is described, and then a sample monster is modified with the template, specifically a Chaos Troll for the Demon Knight and a Dire Boar for the Hell Beast.

I also like the section titled “A Picture Tells 1000 Words.” Editor-in-Chief Aeryn “Blackdirge” Rudel plans to take “a single fantasy illustration, and then build a short, 1,000 word encounter around it” in every issue. The idea is that these short scenes can be dropped easily into any existing campaign, either as an entertaining diversion or the gateway into an entire adventure. In “Spurned,” the first in this series, the characters have been hired to follow a nobleman by his wife, who’s fairly certain the man’s new mistress is dangerous company. It turns out she’s right, because in the marketplace poor Lord Wolve is ambushed by assassins.

It’s up to the players to stop them. The marketplace, adversaries, and possible obstacles are fleshed out, and then the section concludes with a brief discussion of what might happen afterwards, including rewards and possible adventures to follow. It’s a perfect aid for an experienced DM, who doesn’t need acres of material to get the adventure rolling.

All in all, it’s quite a bargain for $1.99, and if Level UP can maintain this level of quality in its issues to come, it’s likely to develop a loyal readership rather fast. (Issues #2 and #3 are also available.)

Howard Andrew Jones (no relation) is the managing editor of Black Gate magazine. His first novel, The Desert of Souls, is scheduled for release in February (today, in fact!), featuring characters who were introduced within the pages of Black Gate. His second novel, Pathfinder Tales: Plague of Shadows, is due out in March. You can find out more about his active writing life at his own website, HowardAndrewJones.com.