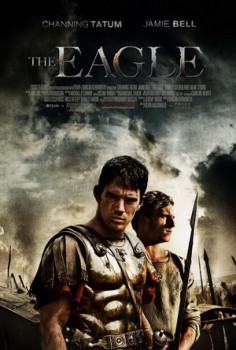 Less than a year after Centurion was released theatrically on a small number screens, along comes another historical adventure film telling the tale of the vanished Ninth Legion. Except The Eagle got released on many screens. In a just and fair movie world, the situation would be the opposite. But anybody who has every griped about the Academy Awards knows that we live in no such world. (And by the way . . . no Best Score nomination for Daft Punk’s work on TRON Legacy?)

The Eagle is the opposite of Neil Marshall’s incredibly energetic, almost gonzo Centurion. Marshall’s film uses a great cast to flesh out its characters and themes of survival and duty while keeping an insane and glorious momentum. At every turn, Centurion does its damndest to keep audience’s adrenaline high. The Eagle, given greater dramatic space for characters between battle scenes, sketches out complete blanks for protagonists, contains no sense of the Roman frontier, and features poorly shot and edited battle scenes that emit out not single nanowatt of excitement. (Oh, I’ll be generous. Not a single microwatt of excitement.) No wonder Focus Features unceremoniously dumped this film out in early February, during Valentine’s Day weekend, up against a kid’s CGI animated movie and romantic comedy starring Adam Sandler. The Eagle is totally disposable.

And given the subject matter, it’s a shame. I hate to see any movie mess up the wonders that the Roman Empire can deliver in terms of action and spectacle. It takes a tremendous amount of work to make me dislike a film about the empire, but dammit if director Kevin Macdonald (The Last King of Scotland, State of Play) and his cast and crew put in overtime to produce a boring film.

Bad movies can be bad in many different ways. The Eagle belongs to the type of bad movie that I term the “Who Gives a Damn?” genre. These films seem to have no energy or life, as if the people involved in their making were going through the motions and had no belief in their product. I cannot speak for the motivations and feelings of the people involved in making The Eagle, but I can speak for the result, and . . . “Who Gives a Damn?” Even the location photography (shot in Scotland and Hungary), an element that is usually a given in historical spectacles, is dreary and boring. 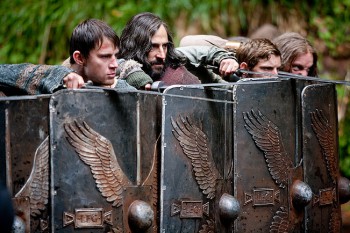 Jeremy Brock’s script is adapted from Rosemary Sutcliff’s 1954 novel The Eagle of the Ninth. I have never read the book, but as it has remained in print for over fifty years I will assume that it has worthwhile qualities that failed to make it onto the screen. The story takes place in 140 CE, twenty years after the Ninth Legion vanished into the Pictish wilderness on the border of Roman-occupied Britain. Marcus Flavius Aquila (Channing Tatum), the son of the general who led the missing legion, goes on a mission to discover its fate. Specifically, Aquila want to retrieve the golden eagle standard of the legion and restore Rome’s honor with it as a symbol.

As the central motif of the the film, the golden eagle has its wings clipped. It is almost trivial the way it has such centrality, when the men who died in the legion receive such minor consideration. Who were these soldiers? Who was Aquila’s father? Please see my above criticism: “Who Gives a Damn?” Not the story I saw on the screen.

But the blame rests not just on the script, but on Channing Tatum’s performance. If this is a personal quest for Marcus Flavius Aquila, Tatum gives nothing to demonstrate that. He merely acts listless, mouthing the lines as required and injecting no passion into scenes that desperately need them.

Faring a touch better opposite him is Jamie Bell playing Esca, a Pictish slave whom Aquila buys after the man’s bravery in a gladiatorial duel. (His bravery is simply standing in place. This is symptomatic of the problem with the entire film.) Bell serves as an antagonistic guide for Aquila, then later an enemy, and finally a bonded friend. Bell has more life in his part, but the chemistry between the two leads never gets off the ground, leaving a gaping whole in the film’s core. 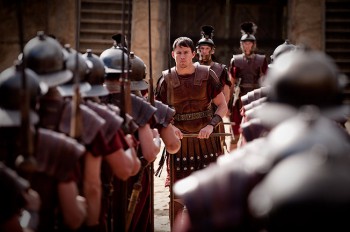 But the action can fill up the void, right? Nope, sorry. Shot with jittery hand-held cameras and staged and edited to keep away from an “R” rating, the battle scenes have no dynamism. You can barely see who is attacking whom, if anyone is actually getting killed, or what the general geography of the action is. The Eagle doesn’t need to have the gore-fest creativity of Centurion, (spear to the crotch!) but a PG-13 rating should not mean a barrier against comprehension and excitement.

The most damning failure of The Eagle is the absence of a single interesting scene, anything that stands out. The dialogue in any given sequence is perfunctory, carrying only the necessary information to move to the next scene, and not written with any concept of entertaining or engaging the viewer. No dramatic moment or revelation carries weight, no action sequence has staying power, no line delivery wakes the audience. The film is a literal connect-the-dots of straight lines that form a picture signifying nothing.

Now, if you’ll excuse me, but I have the urge to go watch Centurion again. Or maybe Ben-Hur. I haven’t watched that in a few years, but perhaps I should wait until the Blu-ray comes out. It was shot in anamorphic 70 mm (MGM Camera 65), and those large formats looks amazing in Blu-ray.

Or, I could go read Sutcliff’s novel. I have discovered a number of great books through the gateway of a lousy film adaptation.

I think I’m a bit fed up with films set in Sub-Roman Britain. Maybe they should try a Beowulf adaptations instead.

Err, maybe not.
Seriously, now. They should make an film set in Ancient/mythic Ireland; that would be a really cool change.

It seems that MacDonald also had a political agenda which possibly means that making an entertaining film wasn’t his top proíority.MAYBE!

And here’s the real hum-dinger…

The best thing on screen I’ve seen in these last years that deals with post-Roman Europe is Dark Kingdom: The Dragon Kin (2004, co-written by Diane Duane, a European television series based on the Nibelungen. It’s just about equal to the wonderful Beowulf and Grendel. But with missing parts due to U.S. dvd release choice, it’s hard to know.

[…] made out of The Eagle of the Ninth called simply The Eagle. I haven’t seen it, but Ryan Harvey was none too thrilled. That’s too bad. The book deserves a good translation. Still, like any good book, it is its own […]