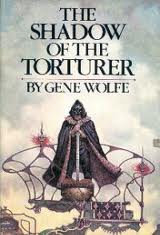 The Shadow of the Torturer
Gene Wolfe
Simon and Schuster (303 pages, 1980)

In the business of reading, which is as industrious and thankless a hobby as ever there was, there are opening lines and then there are melodies, words that ring like bells and stick in your mind, forever.

It was my fortune that a creature of the second sort happened on me one extremely lucky day, in a used bookstore on the last shelf of science fiction. First, it lured me out with its eerie title.

“Shadow of the Torturer?” said I, to myself, plucking the book off of the shelf. It is the first of four books by Gene Wolfe, and the cover of the little novel I held in my hand depicted a hooded man with a bare chest and a sword.

I thought, “What an odd profession, torturing. I mean. Can you even BE a torturer by profession?”

So I opened this little book, tucked away in that lonely aisle and began to read the first page or two. It begins with a translator’s note, warning the reader of difficult and bizarre words to come. These are words, Wolfe explains, that do not exist yet; words from a manuscript he found but did not create, that he has translated from a tongue that will follow the one we speak now. He has done his best to render them in a dialect palpable to the current era.

Enter Severian, whose voice sings like a frigid autumn breeze in the reader’s face, sudden and cold and somehow pleasant all at once: 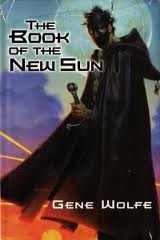 “It is possible I already had some presentiment of my future.”

Every detail, every person, every name is accounted for by this master of memory, who will tell you that he remembers everything, but may both be telling the truth and lying at the same time.

The answer to your questions, when you wonder if Severian is who he says he is, will be yes, no, and maybe, and all three will be true. The shining beacon of hope that he follows, the leitmotif that will guide the narrative of the entire story is a dead woman you have hardly any chance to meet, and yet know everything about.

I devoured this book and the other three parts of it as though I had been starving but never known. I will gladly champion the fifth book, Urth of the New Sun, which author Gene Wolfe was forced during a heroic pirate battle to write, though he did not want to, by his publisher.

You will never find a stauncher, more reliable, gentler or more honest friend than Severian; nor will you ever find as bad a liar, or as naive a fool.

If you choose to follow Severian’s song, you will learn of the horrors and wonders of the alzabo, perhaps even weep beside him at the cruel, unshaken beauty of the night stars. You will travel the world and through time, and within riddles that are stories within stories.

What I am trying to say is, this is the book that changed my life!

It could change yours, too.

That was the first Gene Wolfe book I ever read. You gave it to me. This was about six months before I ever met him.

I forgot about that. I mean, it was in the back of my brain, but I haven’t actively remembered it for a long time.

Jeez, Lydia. That was 11 years ago. In Phoenix. AAAUGGGHH!!! Tempus, it done fugit.

Wolfe’s works are quite brilliant, readable on many levels but not locked away to an elite crowd of “intellectuals” aka hyper-sophomoric jerks.

I like how he really let it was far in the future sink in, such as to those who didn’t notice the Knight on the battlefield was the first astronaut on the moon (now with trees and an atmosphere) the description of the mice in the library building homes from books and smearing with their dung writing on the walls “In their crude language”…

He also “Predicted” the process of turning people into plastic, having a Mining operation that was really just grave robbery of one of the countless civilizations that had come and gone and in it’s case it preserved it’s citizens by turning their bodies into plastic.

IMO, though, he was inspired directly by Clark Aston Smith’s “Zothique” as much as the also inspired Jack Vance. The “Isle of the Torturers” readable online on Eldritch Dark. It’d be rejected by the publishers today as “Bizzarely paranoid and racist” though IMO CAS was on his own tangent and just happened to have the Torturer’s race look kinda Oriental.

I think the concept makes sense, though. Given a long enough time, some autocrat endlessly looking for ways to hold onto his power, might indeed try to create a special “Class” of torturers rather than just relying on military or prison guards or poor peasants willing to be the guy wearing the mask for a few coins. With the endless weight of years, every prophecy would have come and gone, and all any ruler would have is the promise of pleasure/threat of pain/death remaining. Intrigue would be come epidemic in countless layers, plots that could last millenia.

So, an isolated population who’s literal only purpose in life is to torture those sent to them could be an “Absolute” a ruler could have. At first they’d be dependent on the autocrat, but then they’d be totally insular and self sufficient, then over the weight of years the “Empire” could dissolve, leaving the fanatic torturers alone but assuming all shipwreck victims -the island being in a hard to get to place to discourage people trying to rescue someone further- were sent to them.

MAR Barker had such a guild in his Tekumel story.

Although, IMO, one level of reading Shadow of the Torturer it was failed. Severan was obviously left alone with Thelca so he’d sympathize with her and show her mercy. They just thought he’d be grown up enough then to lie about it or just play dumb, then when he was idealistic enough to confess automatically the guy behind it felt guilty and sent him on his exile. Of course, due to Wolfe’s writing, there’s more to the story than even that!

Oh where, I wonder, is Mr. Ward? Bill has been quite vocal in his undying admiration of Gene Wolfe and has been quite forceful in his recommendations that I read this series. Unfortunately, he has not be forceful enough, as I have yet to do so. Here though, is yet another reason for me to remedy this.

This book and its sequels (i.e. The Book of the New Sun) is indeed one of the Great Works of Modern Fantasy. There’s nothing quite like it. It’s a baroque fantasy “skin” stretched over moldering sci-fi “bones.” It’s unrestrained imagination and unfathomable depths of time. Shades of Zothique and the Dying Earth, but an entire reality unto itself. It is the reason Gene Wolfe is a true Grandmaster. This series belongs right alongside Lord of the Rings on the fantasy connosieur’s shelf. It’s also one of the giant pillars of the genre that has become known as “dark fantasy.” There are few fantasy series that can rate.

30 years ago this was “THE BOOK”. I was stationed in Germany and terribly homesick when I first read it. It sucked me in so deeply that I hated it to end. I’ve hardly read any books as special as these since then.