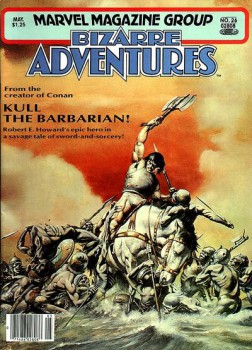 I am a huge Conan fan, but I have to admit that I like Howard’s King Kull stories even better. The Kull tales are more poetic, more lyrical, more mystical … and they reveal more of Howard’s Shakespearean influence than any of his Conan tales.

All of those terrific Kull tales are collected in a terrific illustrated volume from Del Rey entitled Kull: Exile of Atlantis.  If you want the true Kull experience, this book has it all. Yet of all the Kull and Conan comics produced by Marvel Comics in the 70s and 80s, there is one that stands head-and-shoulders above them all: Bizarre Adventures #26, featuring Kull the Barbarian. John Bolton’s dark, lush artwork brought Kull, Brule, and the City of Wonders alive in a work of timeless excellence.

Kull always had it rougher than Conan in the comics world. When the fantastically talented Barry Windsor-Smith put his unique stamp on the Conan character in 1971’s Conan the Barbarian #1, he and writer Roy Thomas ensured it would become a Marvel mainstay. Yet when Marvel added a Kull the Conqueror comic a few years later, they weren’t lucky enough to strike gold again. Various artists did the Kull series, and despite a terrific run by Marie Severin and a couple of great Mike Ploog issues (and later work by Alfredo Alcala and Ernie Chan), the series never approached Conan in popularity or longevity. However, in 1981 King Kull finally got his due in a true masterpiece of sword-and-sorcery: “Demon in a Silvered Glass.”

That was the year editor Ralph Macchio tapped American writer Doug Moench and young Brit John Bolton to bring Kull back in the pages of Bizarre Adventures, one of Marvel’s $1.25 black-and-white magazines. No doubt he was hoping to draw in the loyal fans of The Savage Sword of Conan magazine and the Conan the Barbarian comic when he branded the issue Kull the Barbarian. Kull had been the “Conquerer,” then the “Demolisher,” and “King Kull,” but this was the first time he was billed as the “Barbarian.” Bolton’s spectacular cover painting alone was enough to make fans salivate, with Kull battling a horde of zombies beneath a smoldering vermillion sky.

When I picked this issue up off the convenient store rack I knew instantly that it was something special…as will anyone who cracks open the cover today. The first thing that catches your eye is Bolton’s lush, evocative artwork. As Macchio commented in his introduction, Bolton’s style bore shades of Frank Frazetta and Berni Wrightson at their best. Aspiring comics artists dream of being half this good…and sadly most of them never will be. Bolton hit American shores with a tidal wave of talent; he still commands one of the most sought-after styles in the business today.

“Demon in a Silvered Glass,” was inspired partly by the classic R.E.H. story, “The Mirrors of Tuzun Thune.” Moench knew he had an amazing partner, and he crafted a tale that was perfect for Bolton’s shadowy, illustrative style. His panels are nearly photo-realistic, even though his subjects are the elements of high fantasy: mythical kingdoms, undead zombies, armored warriors, spear-bearing savages, scantily clad maidens, evil wizards, and serpent-folk. Bolton brought them all to life in a style as vibrant and striking as Frazetta himself.

Moench took a cue right from the Book of Howard when he wrote: 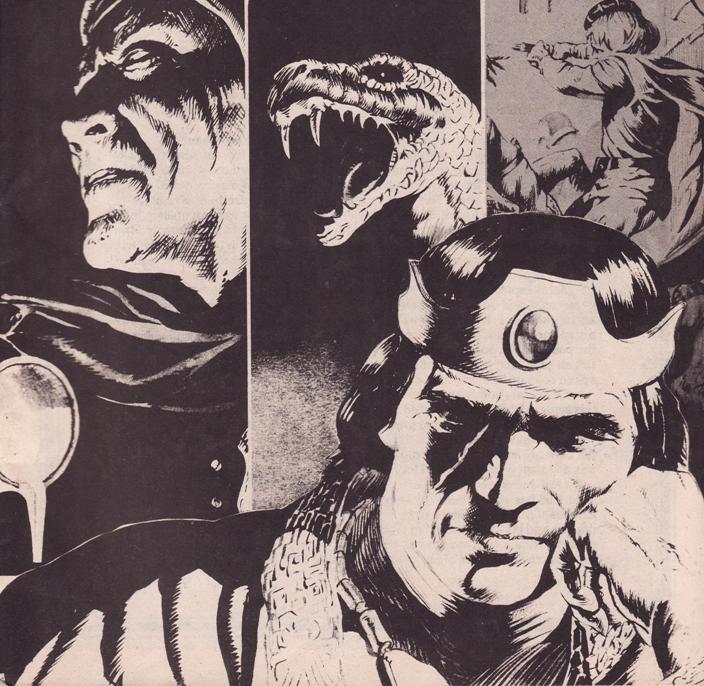 “There comes, even to kings surrounded by splendor, the time of great weariness: Then the gold of the throne is brass, the silk of the palace drab. The speech of men is like the empty rattle of the jester’s bell. A feeling of un-reality takes hold; the sun is a dull copper in the sky, the breath of the turquoise ocean is no longer fresh. Kull sits upon the topaz throne in mighty Valusia, in the City of Wonders, as he listens to the endless drone of Tu, his chief advisor, the hour of weariness upon him…”

So begins this tale of deceit, sorcery, seduction, and blood-red battle. Often in Howard’s tales Kull is bored with his stolen throne, a barbarian-turned-king who misses the freedom of the open wild. It’s a theme Howard would later apply to Conan as well, when he stopped writing Kull in favor of the Cimmerian. Moench stays true to the source: Kull’s ennui leads him into the arms of a mysterious girl, even as the dead start crawling from their graves and slaying his subjects. When one of the zombies turns out to be Borna, the king whom Kull slew to take over the rulership of Valusia, there appears to be something particularly sinister about the rash of undead attacks.

Tu suggests Kull seek the advice of the city’s only sorcerer, Sekhmet Tharn. After some philosophical discussion about the nature of Self in the wizard’s mansion, Kull discovers the girl who has enthralled him is actually the wizard’s daughter Jeesala. Her seduction continues with the approval of her ghoulish father, and the wizard offers Kull a glimpse into his magical mirror. In the silvered glass Kull sees the evolution of primordial man, followed by his own reflection distorted and devolved into a brutish travesty of himself. Moench’s sharp dialogue is often as poetic as Howard’s:

“That was the past, Kull…and the future. Aye, and even now, it is the present, too. Life rising from the mirror of the sea, spilling onto the land…always…with terror. Somewhere in between lies that brief blink of the eye called civilization. And just as surely as fur supplanted scales, as the mammals conquered the reptiles, so too will it begin again. For civilization, Kull, is but a mere façade—and the true nature of man and world is still savage, still primordial.” 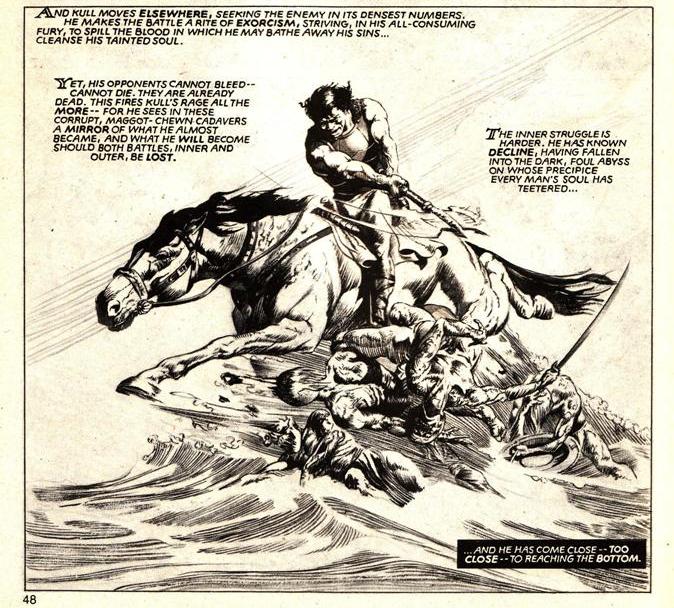 So speaks Sekhmet Tharn, ironically, as he casts a subtle enchantment upon the Valusian King. Corruption proceeds to breed in Kull’s mind and soul, as he makes Jeesala his queen and sinks into the depths of apathy and decadence. Tharn’s dialogue sets the tone for this decline in Valusia’s fortunes, and it takes a rebellion from Kull’s own people and the help of his longtime ally, Brule the Spear-Slayer, to stir him from his dark dream.

Valusia, the height of civilization in Kull’s world, faces utter destruction from nefarious forces, and Kull rallies his countrymen for a final conflict that will determine the course of humanity’s future. Bolton’s evocation of this massive conflict between living and dead men is both grotesque and superb. The magazine format provided a censorship-free environment, so there is blood and gore aplenty. Howard would have been proud to see his creation so lovingly and faithfully depicted.

An enemy from the ancient past is revealed, but not before an entire army of rotting, undead warriors sails into the city port and assaults the Valusians. A vast kraken crawls from the deeps, adding a titanic power to the threat. Kull must face the true heart of the sorcery, the scheming necromancer Sekhmet Tharn and his wicked daughter…who are both not what they appear to be. Most of all, he must face the physical manifestation of the dark, primeval side of himself. Can any man truly overcome the beast that lives within his own heart and mind? It is a battle of legendary proportions, a struggle of will that mirrors the physical challenges Kull endures.

The struggle here isn’t just a matter of swords, axes, and spears…it’s a thematic struggle between the darker side of man’s barbaric nature and his drive to make the world a better, more civilized place. It’s a tale of man’s war against the worst parts of his own human nature, and that struggle echoes in the exterior conflicts that thrill and excite the reader. It’s this blend of interior and exterior conflicts, as well as the poetic language, that makes Moench’s script work so well. Kull says it best himself on the final page:

“I have learned that boredom is a weakness preying upon the soul—a false state of mind which leaves a mind vulnerable to evil. But boredom is hardly our problem now. The City of Wonders has decayed. Portions of it are now aflame or in ruins. There is much to do, much to rebuild…and once this city is rebuilt, we shall continue onward, building new wonders. Follow me and I promise you…we shall never again grow complacent or bored.”

Not only is Bizarre Adventures #26, “Demon in a Silvered Glass,” the single greatest Kull story ever told in comics, it’s also one of the greatest sword-and-sorcery comics ever made (although, technically it wasn’t a comic, it was a magazine, but let’s not knit-pick). This issue made me a life-long John Bolton fan. (I was already a Doug Moench fan thanks to his work on Master of Kung Fu and other great comics.) Every few years I get this mag out and re-read it; rarely have I found a more beautifully illustrated fantasy tale.

“Demon in a Silvered Glass” was recently reprinted in Dark Horse’s THE SAVAGE SWORD OF KULL collection, which collects all the black-and-white Kull appearances from the 70s. (Warning: The majority of these b/w stories are reprints of previously in-color stories already available in Dark Horse’s The Chronicles of Kull — which I also highly recommend.) The original “Demon in a Silvered Glass” issue is pretty rare, but I found several copies available on eBay at reasonable prices.

Someone really should also collect Bolton’s Marada the She-Wolf stories from Epic Illustrated as a trade paperback. It was the next major project he did after this Kull story, and it reflects that same level of lush pen-and-ink work. Later, the artist would team with Chris Claremont for the full-color Black Dragon miniseries. Yet nothing compares to this first blast of Bolton’s genius from across the pond…an unforgettable “tale of Kull when Kull was King.”

For Howard fans, for comics fans, for lovers of great art and fine heroic fantasy, Bizarre Adventures #26 featuring Kull the Barbarian is a timeless treasure.

The King Is Dead…Long Live the King!