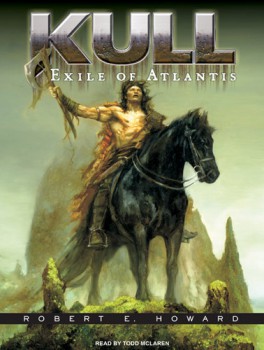 In honor of what would be his 105th birthday, I thought I’d let Robert E. Howard’s own words do the talking.

Here’s a few of my favorites culled from his Conan, Kull, and Solomon Kane stories. There’s so many to pull from but I chose these because they capture the ferocity, humor, and poetic qualities of Howard’s writing.

There comes, even to kings, the time of great weariness. Then the gold of the throne is brass, the silk of the palace becomes drab. The gems in the diadem and upon the fingers of the women sparkle drearily like the ice of the white seas; the speech of men is as the empty rattle of a jester’s bell and the feel comes of things unreal; even the sun is copper in the sky and the breath of the green ocean is no longer fresh.

–“The Mirrors of Tuzun Thune”

“Oh, I’ve dreamed of such a meeting as this, while I crawled on my belly through the brambles, or lay under rocks while the ants gnawed my flesh, or crouched in the mire up to my mouth — I dreamed, but never hoped it would come to pass. Oh gods of Hell, how I have yearned for this!”

–“Iron Shadows in the Moon”

Barbarism is the natural state of mankind. Civilization is unnatural. It is a whim of circumstance. And barbarism must always ultimately triumph.

–“Beyond the Black River”

“Crom and his devils!” he swore. “When the oceans drown the world, women will take time for jealousy. Devil take their conceit! Did I tell the Stygian to fall in love with me? After all, she was only human!”

Suddenly the slim form went limp. The man eased her to the earth, and touched her brow lightly.

Slowly he rose, mechanically wiping his hands upon his cloak. A dark scowl had settled on his somber brow. Yet he made no wild, reckless vow, swore no oath by saints or devils.

“Men shall die for this,” he said coldly.

“I am either king or corpse!” he roared, his corded muscles bulging, his terrible eyes blazing. “If you like not my kingship—come and take this crown!”

…for all men wore masks, and many a different mask with each different man or woman; and Kull wondered if a serpent did not lurk under every mask.

“You fool”! He all but whispered. “I think you never saw a man from the West before. Did you deem yourself strong, because you were able to twist the heads off civilized folk, poor weaklings with muscles like rotten string? Hell! Break the neck of a wild Cimmerian bull before you call yourself strong. I did that, before I was a full-grown man—like this!”

When I was a fighting-man, the kettle-drums they beat,
The people scattered gold-dust before my horse’s feet;
But now I am a great king, the people hound my track
With poison in my wine-up, and daggers at my back.

–“The Phoenix on the Sword”

“There is always a way, if the desire be coupled with courage.”

–“The Tower of the Elephant”

Again dawn tinged the ocean. A redder glow lit the river-mouth. Conan of Cimmeria leaned on his great sword upon the white beach, watching the Tigress swinging out on her last voyage. There was no light in his eyes that contemplated the glassy swells. Out of the rolling blue wastes all glory and wonder had gone. A fierce revulsion shook him as he gazed at the green surges that deepened into purple hazes of mystery.

Belit had been of the sea; she had lent it splendor and allure. Without her it rolled a barren, dreary and desolate waste from pole to pole. She belonged to the sea; to its everlasting mystery he returned her. He could do no more. For himself, its glittering blue splendor was more repellent than the leafy fronds which rustled and whispered behind him of vast mysterious wilds beyond them, and into which he must plunge.

No hand was at the sweep of the Tigress, no oars drove her through the green water. But a clean tanging wind bellied her silken sail, and as a wild swan cleaves the sky to her nest, she sped seaward, flames mounting higher and higher from her deck to lick at the mast and envelop the figure that lay lapped in scarlet on the shining pyre.

So passed the Queen of the Black Coast, and leaning on his red-stained sword, Conan stood silently until the red glow had faded far out in the blue hazes and dawn splashed its rose and gold over the ocean.

–“Queen of the Black Coast”

They say foul beings of Old Times still lurk
In dark forgotten corners of the world,
And Gates still gape to loose, on certain nights,
Shapes pent in Hell.
–“THE BLACK STONE”

“And Solomon Kane shuddered, for he had looked on Life that was not Life as he knew it, and had dealt and witnessed Death that was not Death as he knew it. Again the realization swept over him, as it had in the dust-haunted halls of Atlantean Negari, as it had in the abhorrent Hills of the Dead, as it had in Akaana – that human life was but one of a myriad forms of existence, that worlds existed within worlds, and that there was more than one plane of existence. The planet men call the earth spun on through the untold ages, Kane realized, and as it spun it spawned Life and living things which wriggled about it as maggots are spawned in rot and corruption. Man was the dominant maggot now – why should he in his pride suppose that he and his adjuncts were the first maggots – or the last to rule a planet quick with unguessed life?”
from “The Footfalls Within”

“Let me live deep while I live; let me know the rich justice of red meat and stinging wine on my palate, the hot embrace of white arms, the mad exultation of battle when the blue blades flame and crimson, and I am content. Let teachers and priests and philosophers brood over questions of reality and illusion. I know this: if life is illusion, then I am no less an illusion, and being thus, the illusion is real to me. I live, I burn with life, I love, I slay, and am content.”

From “The Queen of the Black Coast”

I would like to post just one more for those fans who believe the women in REH’s stories were merely *eye candy.” Besides Belit and Valeria, Howard wrote of other strong women, among them Agnes de Chastillon, aka Dark Agnes. Here is her comment from “Sword Woman.”

“Ever the man in men!” I said between my teeth. “Let a woman know her proper place: let her milk and spin and sew and bake and bear children, not look beyond her threshold or the command of her lord and master! Bah! I spit on you all! There is no man alive who can face me with weapons and live, and before I die, I’ll prove it to the world. Women! Cows! Slaves! Whimpering, cringing serfs, crouching to blows, revenging themselves by taking their own lives, as my sister urged me to do. Ha! You deny me a place among men? By God, I’ll live as I please and die as God wills, but if I’m not fit to be a man’s comrade, at least I’ll be no man’s mistress.
BB

Outside, the fog curled and drifted, beading the pane. Pictures formed
for him there–prophetic pictures of an East different from the
colorful civilized East he had touched in his roamings. Pictures not
at all like the European-dominated cities he remembered, exotic colors
of veranda-shaded clubs, soft-footed servants laden with cooling
drinks, languorous and beautiful women, white garments and sun
helmets. Shiveringly he sensed a wilder, older East; it had blown a
scent of itself to him out of the fog, over a knife stained with human
blood. An East not soft and warm and exotic-colored, but bleak and
grim and savage, where peace was not and law was a mockery, and life
hung on the tilt of a balanced blade. The East known by Stockton, and
this mysterious American they called “El Borak.”

The Country of the Knife

Is there any doubt that the Robert E. Howard foundation has more than enough material to produce one of those a one-a-day quotation calendars for us REH fans? I’d buy it.

“But the law!” screamed Tu.
“I am the law!” roared Kull, swinging up his axe; it flashed downward and the stone tablet flew into a hundred pieces. The people clenched their hands in horror, waiting dumbly for the sky to fall.

You were just a few lines off on the best section of “By this Axe I Rule” lol. To me that section i can just picture Kull so perfectly swing the axe up in slow motion and slaming it down to shatter the tablet.

I must read Howard in english

Well I always loved this…

Rising above the black denseness of the trees and above the waving fronds, the moon silvered the river, and their wake became a rippling scintillation of phosphorescent bubbles that widened like a shining road of bursting jewels. The oars dipped into the shining water and came up sheathed in frosty silver. The plumes on the warrior’s headpiece nodded in the wind, and the gems on sword-hilts and harness sparkled frostily.
-Queen of the Black Coast

But we often forget this side of REH…

“Git outa here!” bellered Old Man McGraw jumping up and grabbing the iron poker. “What I does with my datter ain’t none of yore business! Mister Wilkinson here is makin’ me a present of his prime Winchester and five dollars in hard money! What could you offer me, you mountain of beef and ignorance?”
“A bust in the snoot, you old tightwad,” I replied heatedly, but still remembering to be diplomatic. They warn’t no use in offending him, and I was determined to talk quiet and tranquil, in spite of his insults. So I said: “A man which would sell his datter for five dollars and a gun ought to be et alive by the buzzards! You try to marry Glory to Mister Wilkinson and see what happens to you, sudden and onpleasant!”
-Heroes of Bear Creek

Seriously, if you can read that out loud without chortling you’re made of sterner stuff than I am.

All the while I read REH in my younger days, I always pictured him a wizened old timer, perhaps an ex-soldier or historian, and here he only made it to 30 years old.