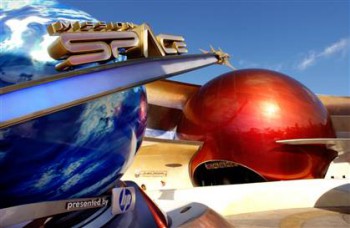 I escaped with the family for the realm of Florida over the last week, and we did the usual tourist things. I managed to leave most of my deadline worries behind me, and while I took my writing notebook, I actually got very little work done. Instead, I recharged, spent time with my wife and kids, and didn’t obsessively think about plotting, dialogue, or character motivation.

I wanted to share one realization, though: of all the rides at any of the Disney parks and Universal, there was one true standout for me, and that was Mission Space. It simulates a craft that accelerates you out of the atmosphere, slingshots your craft around the moon toward Mars, and lands you there. I’m not much of a souvenir guy, but I loved the thing so much that I tried to go back later and buy a Mission: Space t-shirt. Alas, there were none to be found in the gift shop, which I found pretty odd, as Disney’s usually good at marketing. I could have bought a wheelbarrow full of EPCOT shirts or Star Wars junk, but alas, no Mission: Space t-shirt.

I’ve had a lot of fun on various rides over the years, but this one had me grinning with joy at the thrilling illusion that I, Howard, was really blasting off into space and feeling the Gs as I was pressed back into the acceleration couch. I sure have been wanting to game  some Traveller or Firefly since I climbed out of the ride, and I’ve been wishing that there were other space flight simulations available in a similar vein.

I get motion sick at the drop of a hat. I had to let my wife do that ride alone. I was very tempted, but figured even if my stomach got through it, I’d have a splitting headache.

I need to rely on fiction for my space travel experiences. 😉

Yes, I was disappointed with the gift shops. I really wanted something from ‘Mulan’ (honestly, has there ever been a more R E. Howardian opening to a Disney movie – with the gyr-falcon swopping over the battlefield?) But, no. All the princesses were there, but Mulan was nowhere to be found.

Somehow, that didn’t surprise me, in the end.