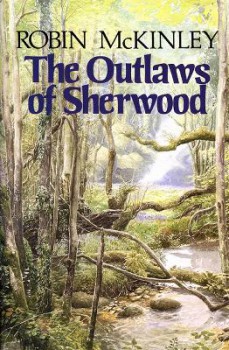 “I am no historian,” Robin McKinley writes in the author’s note to The Outlaws of Sherwood, “and never flattered myself that I would write a story that was historically accurate. I did, however, wish to write something that was, let us say, historically unembarrassing.” I’m no historian either, but I’d say she succeeded.

The Outlaws of Sherwood is, of course, a retelling of the Robin Hood legend. It also feels extremely real, despite the historical issues mentioned in the author’s note. This is a good story for people who like a touch of logistics in their fiction. In between adventures — the book has a somewhat episodic feel, although it’s building up to a definite climax — there are plenty off details that highlight the problems and solutions to maintaining a covert community in a tangled forest.

Close to the beginning of the book, Robin himself gives a memorable rant on the difficulties of such a lifestyle; what are they supposed to do when they run out of arrows? How to get clothes for the winter? Mostly, the solution is to maintain contacts in civilization, people who aren’t particularly fond of their taxes and carefully don’t ask who could possibly want that streaky green wool from the bad dye lot.

Some thought is given to how the outlaws keep watch around the main camp and perform ambushes from trees. During his downtime, Robin is usually seen whittling tableware or fletching arrows. There’s also a lot of thought put into how an outlaw group could help the general populace. 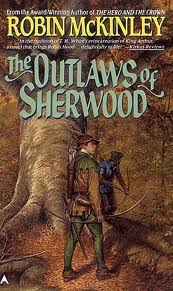 In addition to his traditional “rob the rich and give to the poor” activities, this Robin goes to a great deal of trouble to relocate desperate people who end up in Sherwood, but are totally unsuitable to live there. The band even develops something of an intelligence network to find homes and jobs for such refugees. All in all, these outlaws sometimes feel more like a small, benevolent guerilla group than a legend.

The language in the story is worth noting; it somehow manages to feel like Old English without using archaic vocabulary. It’s a matter of sentence structure, I think, plus a somewhat formal tone. Also, the book has an omniscient narrator, something that seems to have fallen out of popularity somewhat, and that may add to the old-fashioned tone.

Unfortunately, the complex dialog means that it isn’t the fastest read; the word density may come as an unpleasant shock for someone who wants a book to breeze through in one evening, or to read while doing housework. I liked the language and tone a great deal, but I think some people might find it tough going, depending both on how fast they generally read and what they’re looking for at the time.

I do have one complaint: I find many of the peripheral characters more engaging than Robin Hood himself. In this retelling, Robin is more of a brilliant organizer than a brilliant archer (the best archer in band is, in fact, Marian).

Late in the book, one of the characters says that he has a rather frightening ability to convince people to follow him — but I was never quite sold on that. Robin is a pessimist, which seems to make him a good planner but also means he tends to quash anything he sees as overly romantic. 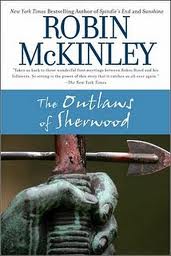 He often seems on the edge of an argument, especially with Marian, whom he thinks is risking herself unnecessarily. I like his dry banter with Little John, once they get to know each other, and sometimes I like how relentlessly anti-legend he manages to be even while he’s turning into a legend.

But my favorite character is undoubtedly Cecil, a prickly teenage runaway with a secret. I would have liked to know more about Eva and Sybil, an inseperable pair of outlaws who become some of Robin’s more reliable “men.” I would have liked to see the band from Much’s relentlessly optimistic viewpoint.

In short, I would have liked the book better if it had spent less time with its main character. That sounds like an awful thing to say, but I think it’s one of the perils of retelling a myth; nobody seems charismatic or larger-than-life to themselves, and using them as a viewpoint character tends to bring them down to earth. I’m not sure there’s a way around this. I’m not even sure it’s necessarily a bad thing.

In short, if you’re looking for something in the style of the Errol Flynn movie, this book doesn’t qualify. If you’d like to read a version of the Robin Hood stories that feels grounded and real, complete with dripping leaves and bad weather, this is a good book to pick up.

What can i say. I LOVE this book. I’m a fairly big robin hood fan, always have been. I love the robin character is this book. I’m not as big of a cecil fan. I liked little john’s character a lot.

I thought this book a decently fast read. I read this book in the 7th grade and didn’t have any trouble reading it. Now that i’m older i wanted to read it again but it took me awhile to track it down because i forgot the author’s name and title.

I love this book too. I’ve read it a billion times, starting around 7th grade as well. Best Maid Marian ever, but all the other cool girl outlaws rocked my world.

Thanks for this review!

[…] novel Sherwood, Richard Carpenter TV series Robin of Sherwood, and Robin McKinley’s novel The Outlaws of Sherwood. So I was pleased to see a new omnibus collecting all three novels of Paul Kane’s post […]