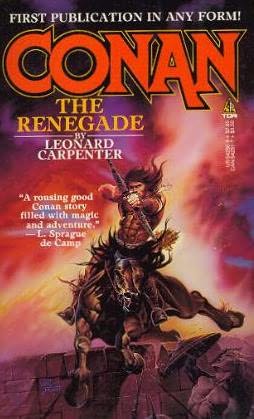 Salutations, lovers of blood and thunder and me babbling about Frederick Faust! This week marks my second anniversary as a blogger on Black Gate. I’ve now held down the Tuesday spot for two years, and I believe that this missive you are now reading is my 104th post (I missed one week, but did a double-post another week during an REH birthday celebration).

Do you know what I am going to do to celebrate? I’m going to do the exact same thing I did on my first post . . . review a Leonard Carpenter Conan pastiche novel! Because I pride myself on my ability to change and adapt with the times.

Leonard Carpenter debuted on the Conan series with Conan the Renegade, which can be summed up in two words: “mercenary adventure.” Military action takes precedence over magic and wonder; most of the story unfolds in a small area around Koth and the bordering kingdom of Khoraja (seen in “Black Colossus,” which Conan the Renegade closely follows in the chronology that Tor Books was using for the pastiches at the time), and Conan’s adventuring mostly occurs within his role as a military leader and tactician. Carpenter does toss in a few horrific fantasy events, such as an unusual combat sorcerer and an ancient dungeon copied right out of “The Scarlet Citadel,” but readers who want a dark fantasy Conan should look elsewhere. Like, uhm, “The Scarlet Citadel.”

The warfare tale follows Conan to the Kothian city of Tantusium where he joins the Free Company of the mercenary captain Hundulph. Hundulph’s men are in the pay of Ivor, a Kothian prince who has risen in revolt against his uncle King Strabonus. Among the other mercenary captains rides the enticing warrior woman Drusandra, who leads an all-female band. Conan has suspicions of Ivor’s sorcerer Agohoth, a Khitan-trained wizard. This is very weird, since Conan never has suspicions about sorcerers.

How does Conan the Renegade fare as a battle epic? Only adequately, I’m sorry to say. Each of the pastiche authors who wrote more than one book has his own peculiar flaw in his writing, some more noticeable than others. Carpenter’s glaring problem is his failure to follow through with his action. The pastiches from Tor frequently have this problem, but Carpenter caught the “anti-climacticus” virus the worst, which is why it amazed me that he avoided it in Conan the Raider. Conan the Renegade unfortunately sets the pattern: it opens promisingly, and one of the early battles where Conan leads an attack on a small Kothian fort reads very well. In fact, in the middle of the novel I realized that I was actually eager to find out what would happen. But when the huge battles arrive at the end, I found myself struggling to pay attention. Carpenter writes the hack n’ slash action in a cold, almost rote style—the complete opposite of Howard’s bloody fury or even Jordan’s punchy sword fights.

None of the new supporting characters makes a memorable impression: the other mercenary captains are nothing more than names and appended nationalities; Agohoth ranks low on the wizard power scale (although the “sword dervish” spell is grisly fun); and characters like Zingaran mercenary Zeno, who could have added more tension with his surly relationship with Conan, either die too early or else never develop much beyond grumbled threats. The two women, Eulalia and Drusandra, could easily vanish from the novel without affecting it at all. Drusandra exists only for a silly orgy scene where she tells Conan she and her warrior-women will only sleep with a man if all of the girls get involved with him at once. There’s a difference between fantasy and sheer ludicrousness.

However, Carpenter does unearth one surprising character, a figure from a Howard story: Yasmela, the Queen-Regent of Khoraja from “Black Colossus.” She has minor impact on the story (although more than Drusandra and Eulalia), but since the pastiches so rarely take a serious interest in the events of a Howard story this is one of the most interesting sequences in the novel. (Aside from “Black Colossus,” the book also makes use of “Shadows in the Dark,” the de Camp/Carter sequel collected in Conan the Swordsman).

The book’s other good sequence is a “horror in the dungeon” chapter that borrows liberally from “The Scarlet Citadel.” Carpenter even offers a different sort of ghastly fright that goes against the usual expectations for a pastiche. But alas, the events end too fast and abandon some promising complications, leaving the reader with a dull scene of Conan climbing down a mountain. (Why is it that mountain climbing, an immensely dangerous activity, is usually so boring to read about?) The book’s other monster provides the rapid finale and it almost works . . . but still not enough to punch up the book’s final moments into anything memorable.

Military fantasy fans may find Conan the Renegade worth their while. I think everyone else should just re-read “The Scarlet Citadel” for the billionth time.

SWEET!!! I was thrilled just to see that someone else has this book. I have the same edition, but I read it so long ago that I don’t remember anything about it, which, I guess, kinda sums-up that I had a similar opinion.
I’ve got a pretty decent collection of these TOR Conan books, – I actually bought most them when they were still new- to go along with my Carter and de Camp edited/ Frazetta covers series. But unfortunately I don’t recall any that could really stack-up against REH’s originals.

It seems like Conan the Valorous by John Maddox Roberts was pretty-good. Have you reviewed that one yet, Ryan?
I think the only one Carpenter wrote that I really liked was Conan the Savage. What I recall didn’t seem to mesh well with Conan’s life chronologically because I think it spanned several years, but I believe the premise was that Conan was kinda reminded of his savage roots due to a long captivity.

I’ve read Conan the Valrous years ago but I have never reviewed it. I think it’s one of the better ones, and it seems the general opinion of it is high; it usually ranks up in the favorites of the Tor Conans among readers. In general, I like Roberts’s Conan books much more than Carpenter’s and Perry’s.