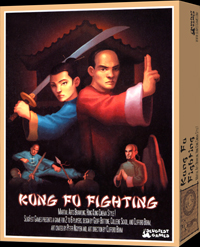 Now that Gen Con is done, it’s time to offer up some final thoughts, experiences, and, of course, games.

One of the best areas to walk around at Gen Con is the art show. This is always fun for me, because I honestly don’t follow artists that much, so sometimes I stumble upon someone really famous whose work I’ve never seen before or who I’ve never heard of. Unfortunately, since the artwork is the artist’s main product, I really can’t reproduce it here without getting into all kinds of messy copyright issues. Fortunately, what I can do is link to the websites of some that I found most enjoyable:

While I covered some fun pulp roleplaying games in yesterday’s post, I didn’t get around to talking some fun games of other types. One publisher that I’d like to discuss is Slugfest Games, which has a wide assortment of card and board games which have a pulp feel to them. The one that I demoed this year was Kung Fu Fighting, a card game in which you play a series of karate moves.

The cards include Stances, Weapons, Attacks, Blocks, Attack Enhancements, and Chi Restoration. The basic game play involves playing at Attack card (like a Punch) and modifying it with Attack Enhancements (like Wild, Spinning, or Flying). The result? A Wild Spinning Flying Punch, which does a fair amount of damage … unless it’s blocked, of course. In one turn, I did 12 points of damage, and the game only goes up to 20, so this can get bloody fairly quickly. The only flaw with the game is that it’s not visual enough. I, for one, would love to see this mechanic transformed into a computer game, where once you complete your turn it actually executes the maneuver on the screen. Well, maybe someday. It would be awesome on an iPad!

There’s also an expansion, More Kung Fu Fighting, which offers Improved cards to modify Stance and Weapon cards (thus turning, for example, your Chair into a Demon-Possessed Chair), Archetype cards that provide new unique powers, and cards that allow for team play. The game is very easy to learn and goes quickly, with some great opportunities for trash talk … especially when my favorite card – Your Kung Fu Is Weak – is used.

And if kung fu isn’t your thing, you might want to check out En Garde!, which uses a similar game mechanic in a swashbuckler setting. 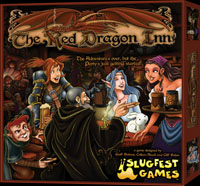 Of course, it might be that you just don’t like to fight. Perhaps games of cunning are more up your alley. If that’s the case, I recommend The Red Dragon Inn. In this game, you and your friends play a group of adventurers who have finished their dungeon crawl and are now kicking back in the tavern, celebrating your success. The problem? If you get too drunk and pass out, you’ll wake up with no gold, so you must keep your wits about you. The basic game comes with the option to play 4 different characters, with more available in the sequel The Red Dragon Inn 2 (sold out, according to the website, and I’m not sure if I actually saw any at Gen Con this year) and the upcoming The Red Dragon Inn 3. Another supplement is The Red Dragon Inn: Gambling? I’m In! which uses the Red Dragon game setting as inspiration for nine different gambling games, and comes complete with the decks and supplies you need.

If these all seem a bit farcical for your tastes (the company is named Slugfest Games, after all), then another company has a dead serious game based on the best-selling young adult novel The Hunger Games by Suzanne Collins. The Hunger Games: Training Day is hard to describe. It’s a card-based strategy game where the Tributes work on their skills leading up to the arena. I watched the kids while my wife played this game and, afterward, she said that she wanted it. Really wanted it. Like “Buy this for me for Christmas!” wanted it. It was the only game we played that got that sort of reaction from her … so I guess we’ll be buying it soon.

For writers, Gen Con has an excellent track of writing panels, workshops, and seminars. The track, called Get Literal, is coordinated by a great group called the Writers Symposium. This year, I didn’t spend much time in the panels, focusing instead on exploring the Exhibition Hall for new games. But there are really great panels, which include everything from how to start out to how to promote yourself. (Below, I’ll discuss my own self-promotion efforts.)

One workshop that I did go to was about how to actually make your living as a writer, which dealt with some of the practical considerations for a writer who is actually successfully selling their works, but needs to find a way to live off of that income.

There were a few great suggestions from this, which helped explain how writers do it. They include:

This is all common sense … but when you’re starting out it’s crucial information that may not occur to you. There were other great panels, such as “Pay It Forward,” which talked about how helping other writers could help you, and then numerous panels on the actual writing process itself. If you are an aspiring writer, I really suggest that you begin attending conventions, as it helps with the motivation. Locus magazine maintains a nice list of science fiction conventions, so you can find one in your area.

When I originally started this year’s Gen Con postings, the idea occurred to me to provide actor Wil Wheaton with a copy of my book, String Theory For Dummies.

Honestly, while I love television, I’ve never cared enough about meeting celebrities to spend the time in line to meet the media guests. (I have, on the other hand, driven three hours to meet author Neil Gaiman.) But I set a challenge for myself, so it seemed like I should at least try to follow through on it.

After about two hours in line, I finally got the chance to talk to Wil. I bought a chapbook to be autographed and chatted with him a bit. One of my best friends had spent the previous day trying to figure out how to get a large bottle of local microbrew to Wheaton (who, on his blog, mentions he enjoys such things). I asked Wheaton how he’d liked the beer, and he smiled, saying that he and his friends had drunk it while playing Dominion the night before.

Then I whipped out String Theory For Dummies, which I’d autographed to him, saying, “In that spirit, I wonder if you’d like another gift.” His reaction was priceless. The picture above is nice, but about 2 seconds before that his eyes were nearly bugging out of his head as he registered the title. (Keep in mind, Wheaton has appeared on The Big Bang Theory, which features string theory prominently … and is mentioned on page 132 of the book.) This was a guy who had people standing in line two hours to pay $20 to meet him, and he was getting geeked over a science book.

That that is a true geek, my friends.

He was very cool and posed for this picture with me, though he did hide his face … clearly not wanting his raw star power to overwhelm the presence of the book.

There’s one final thing of note. Apparently, the idea of giving things to celebrities isn’t that unusual, and a few people ahead of me someone handed him a game. Wil put it over on a pile of stuff. As my wife and I walked away, Wheaton handed the book to his assistant and said, “Put this with my personal schwag.” String Theory For Dummies got placed in a separate pile, presumably with the stuff he really wanted to keep.

So, as you can see, the lessons in shameless self-promotion, learned from many conventions over the years, can sometimes result in some pretty cool benefits. Next on my list, perhaps I can give the book to Stephen Hawking at next year’s World Science Festival …

Did you try Paint and Take? I was there as a minion/instructor. I tried to keep an eye out for authors, but we were crazy busy. My voice gave out before the end of Friday night. When I left at Sunday morning we’d already gone through something like 800 of the donated miniatures.

I heard they’d closed early on Sunday because we ran out, which would have been a first.

The ACES of Painting charity speed paint models raised $650 for the Pajama Program. I was there to emcee for that event, but we didn’t have much of a crowd.

[…] you recall from last year’s report (see Gen Con 2010 Reflections if you don’t recall), I had a lot of fun last year, mostly because I now have a family to […]