Gen Con is packed full of entertainers, in one form or another, but some of the most visible are the singers. There aren’t many of them, but they do stand out … mostly because they’re playing musical instruments.

In this case, it was the musical stylings of Dan the Bard and Water Street Bridge, carefully positioned in the high traffic areas right outside of the Exhibition Hall. Dan the Bard seems to be taking a page from the Old Spice Guy promotional playbook, as his business card indicates that he is “Now accepting commissions for songs about characters and campaigns!” Now you, too, can have your half-elf bard

While the entertainment is great, it doesn’t look like any of the big media guests show up until tomorrow. Sorry, no Wil Wheaton or “The Guild” cast members today … although at one point, I did believe that I passed Mo Rocca in a hallway. (And, it turns out, I may very well have been right. From his Twitter feed, @MoRocca said, about 7 hours ago  “At #GenCon in Indianapolis. Far more authentically nerdy than ComicCon. That’s a compliment.”)

This gave me an opportunity to head into the Exhibition Hall and poke around the periphery a bit. I was able to check in with a couple of old friends from last year.

First, I talked with the folks over at the Shard RPG to see what fun they had coming. It turns out their game of Eastern mythology-based anthropomorphic animals (it’s a lot cooler than that just made it sound, honest) is going strong, and they’re expecting to have their new supplement, Magic and Martial Arts, out by Christmas. Their own website doesn’t even have this information yet, they said, but they had a preliminary copy of the book available. It looks like it will really expand the possibilities of the game in great ways. 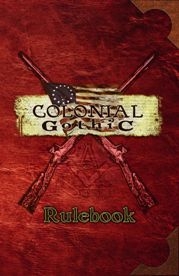 Another old favorite that I checked in on was Colonial Gothic. They have loads of stuff in the works, to expand on their RPG set in the period of the American Revolution. One recent release is the Gazetteer, a guide to the original 13 colonies. Coming soon is a similar supplement covering “New France” – Canada and Louisiana. The goal is to expand the setting materials to include other regions, such as the Caribbean, and presumably Spanish territories on the mainland as well.

Flames of Freedom: Boston Besieged represents the game’s first adventure module. It is the first in a four-part series, and they hope to release one book each year. The first book covers (as the title suggests) the historical siege of Boston. Due out next year is the second book in the adventure series, which will focus on Philadelphia.

I did make it to one panel today, a presentation by former Wizards of the Coast lawyer Brian Lewis (of Rosen Lewis PLLC), who spoke about intellectual property considerations and protections for game designers. This is one of the men who helped create the concept (and legality) of the D20 Open Gaming License, so it was a very cool talk. (Cool being a decidedly relative concept when talking about intellectual property legislation, of course.) For those interested in designing a game, he definitely recommends filing for a “common law trademark” and also filing for copyright on your game. These are relatively inexpensive, and if the game begins to take off you can then focus on the patent and “registered trademark” options. Also, it’s good to use non-disclosure agreements.

If you do happen to want to design your own game, there are several organizations at Gen Con which may be of interest to you.

There are likely more such companies around the convention, as well. I only made it around the periphery, really, and still have to get to the heart of the Exhibition Hall. Tomorrow: Author’s Avenue, Writer’s Symposium, the Art Show, possibly Wil Wheaton & Felicia Day, and, of course, more games. You can follow as the day progresses on my Twitter feed, @azjauthor.

Finally, lest anyone think that today was all “work,” we did let our hair down a bit … but it’s okay, the baby made it out alive.

[…] mighty vorpal blade and the strongest of enchanted shields, the elder brother seeks retribution for yesterday’s attack on his baby brother … after he adjusts his […]

[…] Thursday’s post, I discussed the new and upcoming releases for the Colonial Gothic game system. Well, that […]